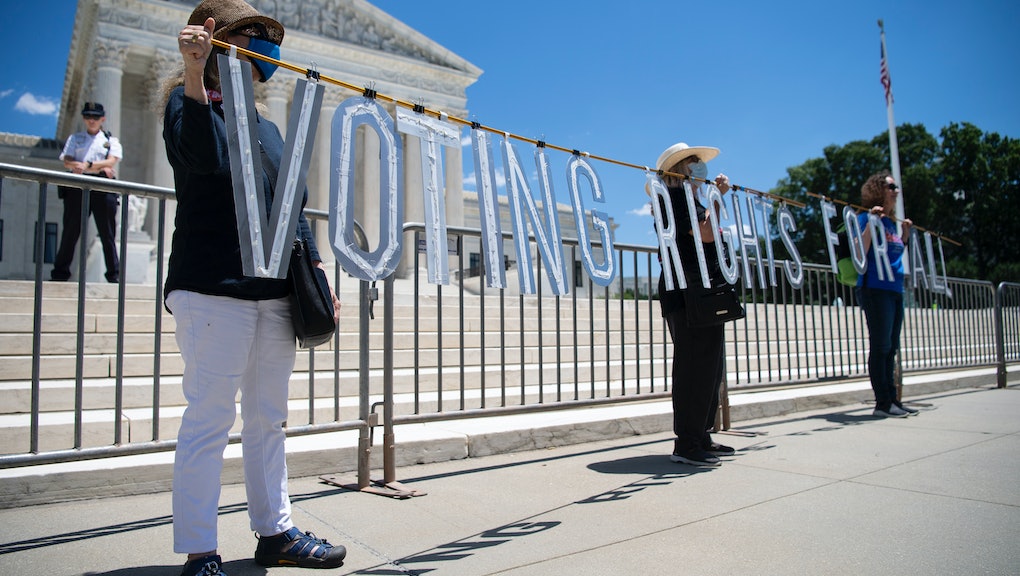 Perhaps nowhere in the United States best exemplifies the GOP's widespread effort to restrict, manipulate, and ultimately dominate the electoral process than Georgia, arguably ground zero in a broad conservative push to permanently rig the voting process against Democrats. That effort kicked into overdrive in the wake of the 2020 general election, when Joe Biden defeated incumbent President Donald Trump, and Democrats flipped both the state's Senate seats blue.

On Friday, the Biden administration took a major step toward addressing Georgia's re-energized voter suppression legislation, with Attorney General Merrick Garland announcing that the Department of Justice is suing the state over the recently enacted so-called Election Integrity Act. That bill, signed into law this past spring over intense objection from civil and voting rights groups, limits access to ballots in heavily Democratic areas, criminalizes giving water to voters waiting in line at polling places, and reassigns electoral oversight power to the state's conservative legislature.

"Today, the Department of Justice is suing the state of Georgia," Garland said in a press conference, flanked by a number of DOJ deputies participating in the suit. According to the Justice Department, the Election Integrity Act was "enacted with the purpose of denying or abridging the right of Black Georgians to vote."

The suit will be spearheaded by DOJ Civil Rights Division Chief Kristen Clarke and Associate Attorney General Vanita Gupta. It comes just weeks after Garland announced plans to double the Justice Department's roster of civil rights attorneys within 30 days, with a particular focus on "scrutinizing current laws and practices in order to determine whether they discriminate against Black voters and other voters of color."

Garland also announced that the DOJ is creating a resource guide for local election officials to help push back on efforts to restrict voting rights in their communities, and is also creating a task force to forcibly respond to threats made against voting officials at every level of the electoral process.

Congressional Democrats have spent much of this legislative season pushing for expanded voting rights and protections, as Republicans in states around the country have pushed to limit who can vote and how — fueled in no small part by Trump's roundly debunked claims that he lost the presidential election due to voter fraud.

Crucially, Garland made clear during his press conference that this week's announcement was the beginning of a larger push to identify and respond to other states' efforts to limit voting rights for residents, vowing that "where we believe the civil rights of Americans have been violated, we will not hesitate to act."

More like this
Trump kept a Gitmo prisoner detained for 5 extra years. Biden has finally freed him
By Rafi Schwartz
More than 200 GOP lawmakers asked the Supreme Court to overturn Roe v. Wade
By Rafi Schwartz
Republicans are in an excellent position to weasel their way back to House control
By AJ Dellinger
Stay up to date