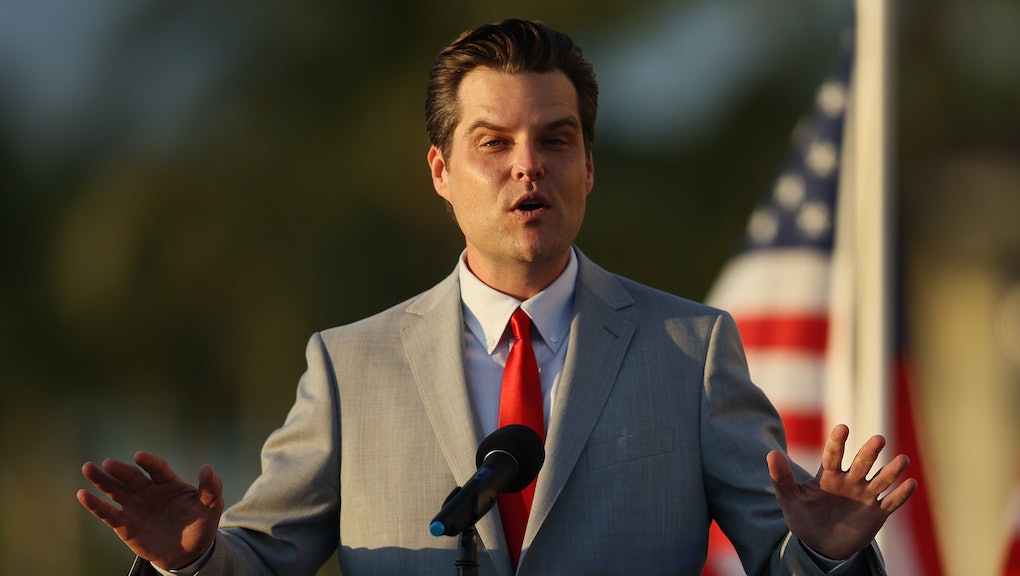 At this point it seems increasingly likely that Florida Rep. Matt Gaetz will be indicted on charges stemming from the Justice Department's recently concluded investigation into former GOP state party figure Joel Greenberg. Greenberg is expected to agree to a plea deal over his own alleged crimes — including sex trafficking — and has reportedly been helping DOJ officials build a case against Gaetz since last year. He pleaded not guilty before a judge last week while his plea agreement is being finalized.

While we all wait to see if/when Gaetz is actually hauled before a judge for allegedly paying for sex and, according to The New York Times, having sex with a minor, the mere possibility of criminal charges against the rising MAGA movement star has seemingly broken the seal on a veritable dam of allegations that, while not necessarily directly related to the DOJ's investigation, are fairly damning in their own right.

"No one ever wants to stop partying, stop drinking, once you've had a few glasses of champagne in you," one woman told CNN, confirming that she did receive payments for sex at these events, but never from Gaetz himself. She did, however, say she was transferred money from Greenberg, which is in keeping with earlier reporting that Gaetz had Venmo'd funds to his self-described "wingman," who would then ostensibly distribute the money to women for their services.

According to another woman, Gaetz would pop pills and act like a "frat type of party boy," discussing politics and schmoozing while revelers indulged in coke and ecstasy.

Notably, one of CNN's sources told the network she wanted to push back against the growing narrative of Gaetz's predilection for underage sex, with both women saying they never saw anyone who appeared to be a minor at any of the parties in question. Also notable is the fact that both women say they have yet to speak with federal investigators, which is probably going to change now that their stories are out in the open.

Gaetz, for his part, has steadfastly rejected allegations of criminal wrongdoing with conspicuously worded denials and a disastrous appearance on Tucker Carlson's Fox News program. Still, given the volume of seemingly congruent allegations against him — and his proximity to Greenberg and other similarly disreputable characters — it seems safe to assume that, charges or not, Gaetz is unequivocably guilty of having terrible taste in friends and terrible judgment in general.

More like this
Matt Gaetz's alleged sex party pal is officially cooperating with the feds
By Rafi Schwartz
Buckle up: The investigation into the Jan. 6 insurrection is just getting started
By Rafi Schwartz
Marjorie Taylor Greene and her team are just openly accosting people in Congress now
By Rafi Schwartz
Stay up to date