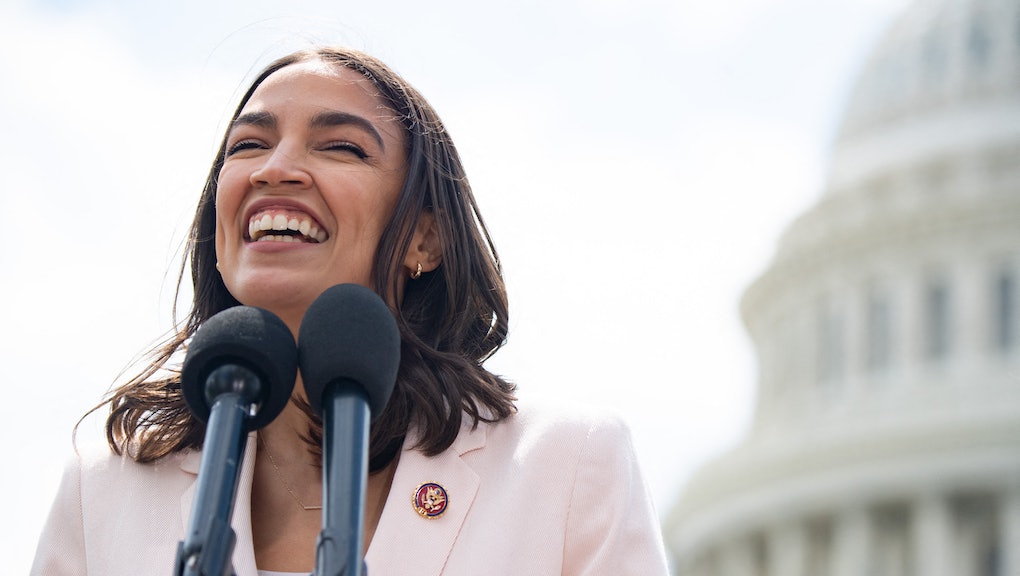 The Green New Deal is back, baby

New York Rep. Alexandria Ocasio-Cortez is turning this week into Green New Deal week. After introducing two major proposals on Monday that would seek to modernize cities and public housing in an effort to bring the country closer to carbon neutral status by 2050, the congresswoman is finally playing the song everyone came to hear. On Tuesday, Ocasio-Cortez and Sen. Ed Markey of Massachusetts reintroduced the Green New Deal, putting forth yet again the set of ambitious climate proposals that have come to define the left-wing's approach to our planetary crisis.

Like the original Green New Deal resolution that came before, Green New Deal 2: Electric Boogaloo hits all the notes required from serious environmental legislation. It recognizes the very real threat of climate change and acknowledges that the United States must achieve net-zero carbon emissions by 2050 in order to stave off the worst outcomes that a warming planet portends. The resolution would call on the federal government to undergo a 10-year mobilization effort that would seek to overhaul the energy sector to ditch fossil fuels and adopt renewable energy sources like wind and solar power, invest heavily in electric vehicles to reduce the impact of transportation while expanding public transportation and high-speed rail, and address racial inequality and injustices that have resulted in communities of color experiencing the worst effects of pollution and land being taken from Indigenous people to be exploited.

What is new with this version of the Green New Deal is the amount of support behind it. When the first version of the resolution was introduced in the House on Feb. 7, 2019, it had 67 co-sponsors. At a press conference re-introducing the legislation Tuesday, Ocasio-Cortez said that there are 103 co-sponsors in the House, marking a record number supporting the proposal right out of the gate.

"The climate crisis is a crisis born of injustice, and it is a crisis born of the pursuit of profit at any and all human and ecological cost," Ocasio-Cortez said during the press conference. "We're going to transition to a 100% carbon-free economy that is more unionized, more just, more dignified, and guarantees more health care and housing than any than we ever have before."

While the Green New Deal has been a lightning rod for Republican criticism, with false claims that it would cost tens of trillions of dollars, it seems that it's actually growing in popularity. In addition to the litany of co-sponsors in the House, Markey credited the proposal with winning him a landslide re-election in 2020. "Just look at my race in Massachusetts. I ran and won on the Green New Deal," he said Tuesday, noting that the proposal has brought young progressives out of the woodwork and gotten them politically active and engaged.

"The era of the Green New Deal has arrived," Markey said, noting that even though the resolution has failed to pass Congress, its starting to make its way into legislation. Markey claimed further that the Green New Deal is "in the DNA" of President Biden's proposed infrastructure package.

He's certainly right about the former, as AOC and other progressives in the House and Senate have taken the opportunity to green-ify just about everything. On Monday, the congresswoman-turned-Twitch streamer joined with Sen. Bernie Sanders (I-Vt.) to introduce the Green New Deal for Public Housing, which would retrofit nearly 1 million apartments and housing complexes to make them more energy-efficient and address issues of pollution and poor water quality. She also teamed up with Rep. Cori Bush of Missouri to introduce the Green New Deal for Cities, which would set aside $1 trillion to improve water infrastructure by removing lead piping, weatherize communities against threats like flooding, and improve air quality.

These proposals — along with AOC and Markey's other collaboration, the Civilian Climate Corps for Jobs and Justice Act, which would recruit 1.5 million Americans to help complete federally-funded projects across the country that seek to address climate change — add some real weight behind the Green New Deal. Despite constantly being presented as some sort of radical proposal, the Green New Deal is actually a non-binding resolution that simply commits the government to addressing climate change. But if Republicans can get worked up over a proposal that simply recognizes the reality of climate change, just imagine the fit they'll throw when there's actual money and action behind the policies.