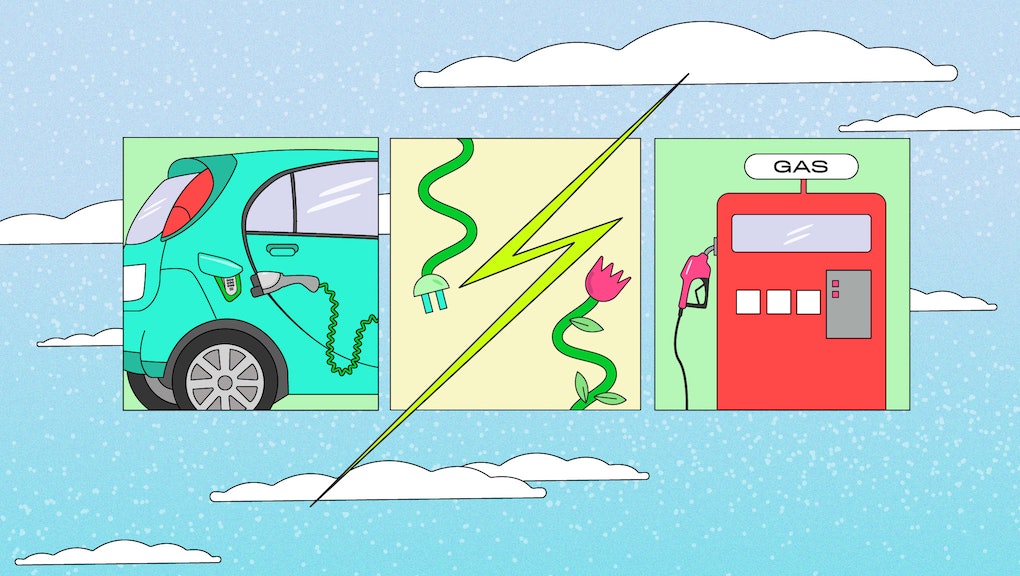 Electric cars are here to stay. What felt like a pipe dream a decade ago is now the default of the future. States and countries have announced cut-off dates at which point they will ban the sale of combustion engine vehicles that guzzle fossil fuels and emit pollution. Major auto manufacturers have accordingly announced plans to shift to fully electric fleets within the next 15 years. Some of the largest fleets in the world, from Amazon's delivery trucks to the U.S.’s entire range of government-owned vehicles, are planning to go electric, too.

The writing is on the wall for gas guzzlers. But this seemingly sudden shift does leave a lingering question: Are we sure electric cars are really that much greener than their combustion-based counterparts?

The theory of why electric vehicles would be better for the planet than gas-powered cars and trucks is pretty simple. A combustion engine requires you to burn fossil fuel to operate it, and burning that gas directly results in carbon emissions. An electric vehicle just needs electricity, which produces next to zero tailpipe emissions, which means running the vehicle is doing far less damage to the planet.

So, that's that, right? Unfortunately, not quite.

The thing is, there is more to the life cycle of a vehicle than the time that it spends with you. It's just like reusable bags: They're great because they eliminate the need to take home plastic bags every trip you make to the grocery store, saving tons of unnecessary waste. But the full lifecycle of these bags, from when they're produced to when you finally discard them, requires a lot more resources than you might think. Some estimates suggest that you may have to use certain reusable bags thousands of times to justify all of the energy needed to make and dispose of these bags. There's a similar problem with electric vehicles: Sure, they produce fewer emissions when they're being driven, but think of all the energy and resources that go into making them before they ever hit the road. That process creates emissions, too.

This is a valid critique. But it often gets twisted into an odd form of absolutism used by electric vehicle opponents. When the PragerUs of the world raise this point, it's meant to be damning to the prospect of electric vehicles as a whole. It's a bad-faith argument that amounts to something like, "Electric cars aren't as green as you think and still require fossil fuels to manufacture, so what's the point?"

The point, of course, is to reduce emissions, even if it's not entirely possible to hit the ultimate goal of net-zero. And to be clear, electric cars do accomplish this. But it's worth engaging with these critiques directly because consumers should be aware of what goes into the creation of their car. And the best place to start when considering the emissions of electric vehicles is the battery.

Batteries are the pivot point for the success of electric vehicles. George Crabtree, a senior scientist at the Argonne National Laboratory and the director of the Joint Center for Energy Storage Research (JCESR), tells Mic that one of the primary reasons electric vehicles have started to become more popular is because the cost of producing their batteries has decreased dramatically. "It's not quite a factor of 10, but it's getting close to that, and certainly will be a factor of 10 if we wait a few more years," he explains. Technological advances have dropped the cost, which in turn has brought the overall cost of the cars down, which has made electric vehicles more viable alternatives to combustion engines.

But, Crabtree says that the battery alone still makes up about 25% of the total cost of an electric vehicle, and manufacturing these batteries is still more difficult and resource-heavy than scientists would like. "It's a pretty complicated supply chain," he notes, driven largely by the need for rare elements like lithium and cobalt. These elements come from all over the world — Crabtree says that no one country has a hold on the entire supply chain — and can often dip into ethically dubious business practices. The mining industry that provides these elements is often rife with corruption, uses forced child labor, and does not typically subscribe to sustainable practices or environmental regulations.

Between acquiring the materials needed to create the battery and then actually manufacturing it, an electric vehicle manages to rack up a noteworthy carbon footprint before anyone ever presses the gas pedal. "While at the production floor and before it hits the road, an electric vehicle has likely generated more greenhouse gas emissions than a comparable gas-powered vehicle," says Ioannis Bellos, an associate professor at the George Mason University School of Business and an expert in sustainable operations. "A big part of these emissions is coming from the manufacturing of the batteries. Therefore, any improvements in battery and mining technologies can lower the environmental impact."

According to research conducted by the University of Toronto, electric cars can generate as much as 65% more emissions than the traditional gas-powered car during the manufacturing process. A report published by the Union of Concerned Scientists estimates that manufacturing footprint could be anywhere from 15% to 68% larger for the electric car, depending on its range.

Luckily, there is a solution to this: a cleaner grid. At the risk of presenting the idea as a panacea, relying more on renewable energy production is key to making sure electric vehicles are as clean as possible throughout their full lifecycles. With demand for electric fleets on the rise, the production of batteries and vehicles is ramping up. Converting these plants to clean energy sources would go a long way. "It's quite possible to reduce [the footprint of manufacturing]," Crabtree says. "Maybe to zero, but [we can] reduce it a great deal by simply using renewable electricity." This has already been achieved in Sweden, where a battery factory powered by hydroelectricity has decreased the emissions required to produce batteries by between 60% and 70%.

"On average over the whole country, electric cars are now cleaner than gasoline cars."

That same theory applies to actually fueling electric vehicles. While their tanks are not directly filled with fossil fuels, the fact that large swaths of the electric grid still rely on coal and natural gas means that the electricity that goes into the battery may still be coming from a dirty energy source. Hang Ren, an assistant professor of information systems and operations management, says that this part of an electric vehicle's impact is often overlooked. "The electric grid relies on both renewable and non-renewable energy sources, and the composition differs across grid regions. This means that depending on the energy mix, the same electric vehicle can have wide variability in its environmental impact," he says. If you are fueling your car in a place that still utilizes fossil fuels to power the grid, your electric car is still relying on these fuels in order to operate, even though it isn't actually burning them while in use.

Even considering the fact that electric cars can end up consuming fossil fuels in settings where the grid is not using renewable energy sources, the fact is that these cars are cleaner and better for the environment than their gas-guzzling counterparts. Just how much cleaner will vary considerably, but the trend lines are positive. Andrew Yates, a professor at the University of North Carolina with a focus on environmental economics, says, "Marginal damages from local and global pollution from electricity generation have been falling in the East [U.S.]." While they are flat or even rising slightly in other regions, "On average over the whole country, electric cars are now cleaner than gasoline cars," he says.

A report from the Union of Concerned Scientists estimates that a gasoline car would have to get 68 miles per gallon to produce less carbon emissions than an electric car over its full span of the life of the vehicles — something no combustion engine car made in the U.S. can achieve. While electric cars start with a carbon debt from the manufacturing process, it doesn't take long for them to make that back; research from the University of Toronto estimates that it takes a little over 20,000 miles of driving to break even.

While electric cars are already more environmentally friendly than gas-powered vehicles in almost every setting, the best news is that they will only get cleaner. As new battery technology that requires less material to produce is developed and as grids are increasingly converted to clean energy, the environmental benefits enjoyed by electric cars will only improve. "[The carbon footprint] will surely drop," Crabtree says. "I think there's no doubt about that."