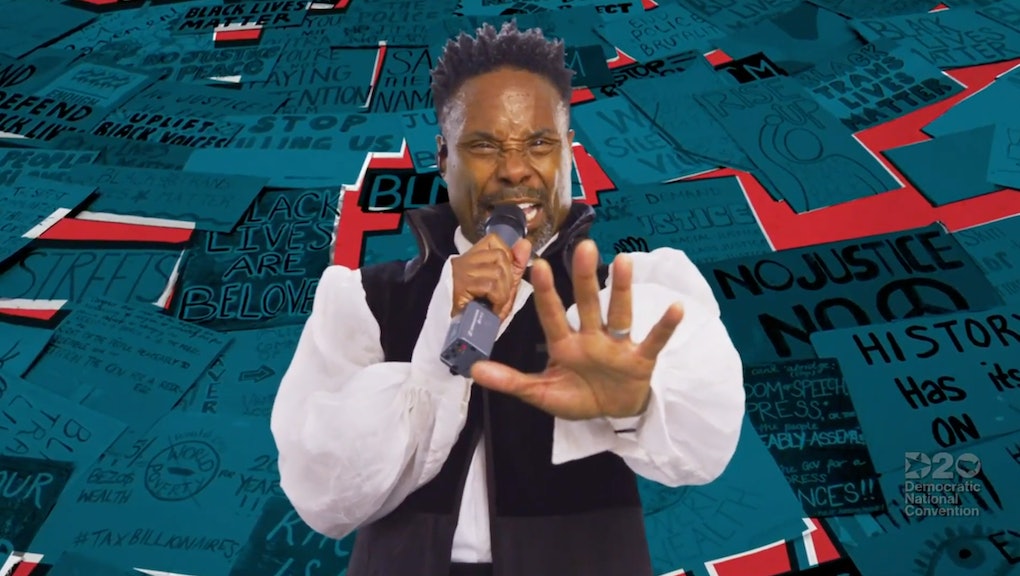 Billy Porter performs Buffalo Springfield's 'For What It's Worth.' Screenshot via YouTube

The musical performances at the virtual DNC were delightfully weird

Yesterday kicked off a Democratic National Convention unlike any political gathering in American history. Thanks to the ongoing pandemic, of course, the 2020 DNC went virtual. It was sort of like a telethon crossed with a Zoom meeting sprinkled with virtual concerts. But all things considered, the two hours of programming seemed pretty tight. People are largely talking about former first lady Michelle Obama’s searing takedown of President Trump, for good reason. But hosted by actress Eva Longoria, the first night of the DNC delivered striking musical performances, as well.

Maggie Rogers sang “Back in My Body,” the closing track from her debut album Heard It In A Past Life. The song is about learning to live life on your own terms, but the DNC reappropriated it for the coronavirus era. A slideshow of photos of American life in quarantine accompanied the tune. Rogers, who was introduced by Democratic Senate hopeful Sara Gideon, performed her emotional ballad on a spit of rocky coastline in Maine.

Leon Bridges, vocalist Terrace Martin, and their backing band set up on a sun-drenched city rooftop to perform “Sweeter,” his heart-wrenching reflection on racial injustice, penned in the aftermath of George Floyd’s death. “I have been numb for too long, calloused when it came to the issues of police brutality,” the artist wrote in a statement accompanying the track’s release. “The death of George Floyd was the straw that broke the camel’s back for me.”

Finally, at the close of the convention’s first night, Billy Porter teamed up with Stephen Stills of Buffalo Springfield to sing the band’s iconic protest song, “For What It’s Worth.” Legend has it, Stills wrote the song in 15 minutes, reacting to images of police brutality against teenagers on LA’s Sunset Strip in the 1960s. The DNC revived the track as a green screen performance, with Porter caped and traipsing and Stills shredding his guitar against a background of a deconstructed American flag and images from protests against police brutality this summer.

More like this
Will ‘Impeachment: American Crime Story’ finally do the Monica Lewinsky story justice?
By Chloe Stillwell
HIV awareness organizations tell DaBaby how to transform from “adversary to advocate”
By Chloe Stillwell
In a #FreeBritney era, will we treat Olivia Rodrigo differently?
By Brandon Yu
Stay up to date