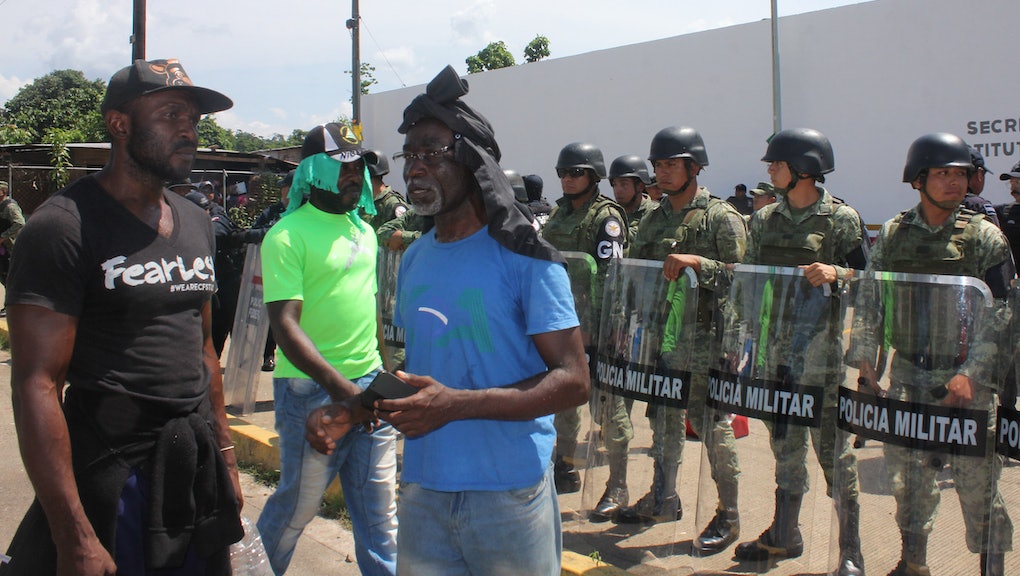 The U.S.-Mexico border has become a purgatory for African migrants

President Donald Trump’s immigration policies have resulted in a number of horrific, well-documented outcomes: children dying in filthy detention centers, allegations of racism and abuse by border agents, the rejection of asylum-seekers who trekked hundreds of miles from violent circumstances for a better chance in the United States. But one of the more surprising consequences of the Trump administration’s xenophobia is who exactly is getting stuck in limbo at the U.S.-Mexico border.

Federal statistics are sorted by fiscal year, and for fiscal year 2009 Mexicans made up roughly 92% of all border apprehensions, according to U.S. government-funded news site Voices of America. But in the years since, Central Americans have comprised a much higher number of apprehensions, and many migrants have been attempting to cross the border as families rather than individually. Another major shift: Since 2017, the rate of apprehensions of migrants coming from outside of the Americas has doubled — from 4.3% in 2017 to 8.4% in 2019.

While apprehensions aren’t a completely accurate representation of who is trying to cross the border, the figures do provide some idea of who is seeking refuge in the U.S. And according to anecdotal information and early estimations, more and more African migrants are joining the community of people seeking asylum. These people often plan to reach the U.S. by traveling to Mexico first — but once they get there, they’re being forced to remain in Mexico rather than continue north, thanks to a deal that the Trump administration struck with the Mexican government this past January. Under the agreement, asylum seekers who arrive to the U.S.- Mexico border will be sent to Mexico while they wait for their U.S. immigration proceedings to begin.

Most of the African migrants are coming from the Democratic Republic of Congo, Angola, or Cameroon, according to U.S. Customs and Border Patrol, and they describe fleeing dangerous governments, deadly conflict, and indiscriminate killings. On May 31, a group of 116 people from those countries was apprehended at the Border Patrol’s outpost in Del Rio, Texas. “This large group from Africa further demonstrates the complexity and severity of the border security and humanitarian crisis at our Southwest border,” said Del Rio Station Chief Raul Ortiz in a press release.

In Mexico, where some African migrants have found themselves stuck at the Guatamala-Mexico border town of Tapachula, protests have broken out demanding the ability to apply for asylum in the U.S. and Canada as well as access to basic resources to be able to navigate life in Mexico without being forced to live on the streets. In June, PBS reported that the immigration detention centers in Mexico suffer from severe overcrowding and dangerous conditions.

Many of the migrants speak little to no Spanish, which Voices of America notes has presented a unique challenge. Firstly — and most obviously — the language barrier limits migrants’ ability to communicate in a country they didn’t expect to remain in for any substantial amount of time. It also means that when migrants originating from Cameroon, Angola, or the Congo are apprehended at the U.S. border, agents are often unable to understand them; most agents are only fluent in English and Spanish. U.S. officials are thus left rushing to find interpreters.

While Trump’s “Remain in Mexico” policy has certainly contributed to the specific circumstances some African migrants are experiencing now, this is far from the first time people traveling from Africa have been abused due to U.S. immigration policies. In March 2018, a report by several different Texas agencies revealed that migrants from Kenya, Sudan, and Somalia reported being physically and verbally abused inside a privately run Immigration and Customs Enforcement detention facility. The report detailed that the men detained were called racial slurs, beaten, and “treated like animals.”

What’s next for those currently stuck in Mexico remains unclear. While the Trump administration remains committed to its current policies and rhetoric, it seems unlikely that asylum-seekers in Mexico — no matter where they’re from — will be given a fair opportunity to submit an application. Some believe that African migrants will stop trying to enter the U.S. and instead refocus their efforts on getting to Canada, which is viewed as potentially more hospitable to migrants and asylum-seekers. But as it stands now, an unknown number of people are being denied the right to legally exit Mexico, where they are living without access to basic needs such as safety and shelter — and there’s no clear end in sight.

More like this
New York has set aside a massive, first-of-its-kind fund for undocumented workers
By Rafi Schwartz
Um, Biden's big immigration deal seems pretty similar to Trump's
By AJ Dellinger
The Chauvin trial is incapable of delivering real justice
By Vanessa Taylor
Stay up to date