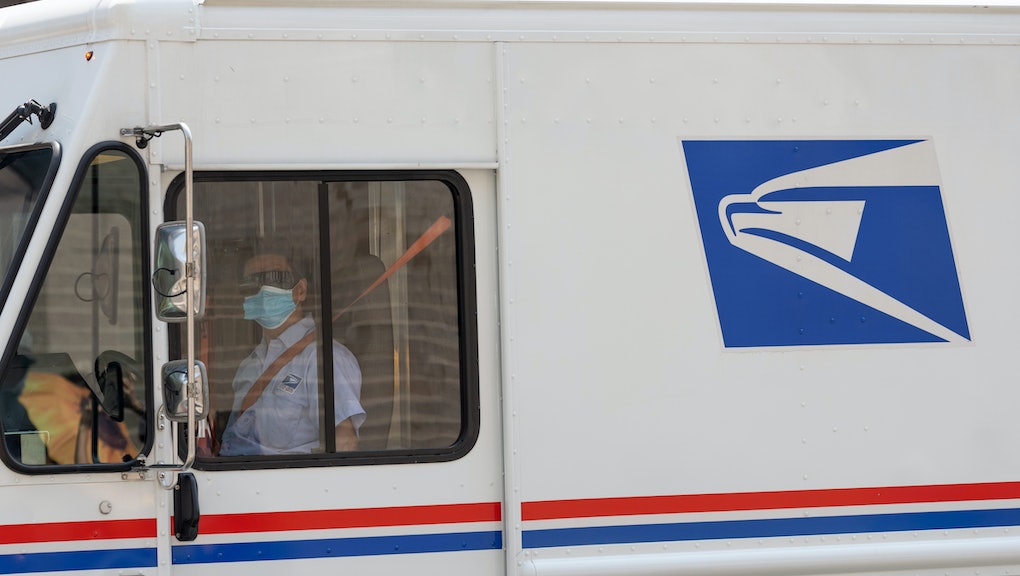 The White House reportedly scrapped a plan for the USPS to distribute face masks to every U.S. household

The Trump administration has, shall we say, "struggled" with how best to both encourage Americans to don Coronavirus-stifling face masks, while simultaneously allowing the president to flaunt his way through refusing to actually wear one himself.

The United States Postal Service (USPS), meanwhile, has faced its own struggles of late — among them, contending with a hand-picked Trump crony whose main purpose at the agency seems to be manifesting the president's significant antipathy toward the constitutionally-mandated institution by hobbling the country's ability to send mail in the months ahead of the 2020 national election...in the middle of a pandemic.

These two unfortunate truths collided this past April, according to a trove of documents obtained and published this week by The Washington Post, in partnership with the governmental watchdog group American Oversight. Nestled within the nearly 10,000 pages of what the Post labeled as "emails, legal memos, presentations and other documents" is a strikingly comprehensive plan created by the U.S. Health and Human Services (HHS) department to utilize the USPS' vast distribution network to provide 650 million face masks to Americans — five for every household.

There was even a draft press release created to announce the massive — and possibly massively life-saving — distribution plan, complete with rousingly patriotic quotes from then-Postmaster General Megan Brennan.

"Wow," you might be saying to yourself. "Free masks for every home? Way back in April? I bet that would have put a dent in America's catastrophic coronavirus infection rates! Wonder why it never happened?"

As it turns out, the plan to mask every single household in the country was reportedly nixed by the very administration that spent months downplaying the severity of the pandemic, even as the president himself bragged privately about just how deadly the virus actually is.

"There was concern from some in the White House Domestic Policy Council and the office of the vice president that households receiving masks might create concern or panic," one administration official quoted by the Post explained.

Consider that for a moment: The administration seemingly believed that readily giving the public the extremely necessary tools to fight the pandemic would somehow be worse than letting them handle it on their own, because it could "create concern."

Personally, I am concerned about the nearly 200,000 people who have died in the United States largely as a result of the Trump administration's grotesque passivity in the face of the pandemic. But hey, that's just me.

As the Post noted, funds for the since-aborted USPS/HHS mask distribution plan were subsequently rerouted to cover a slightly different initiative to send “reusable cotton face masks to critical infrastructure sectors, companies, healthcare facilities, and faith-based and community organizations across the country." That's nice, I suppose, but not exactly the same as getting the entire nation to wear the damn things.

More like this
Sarah Sanders is here for the vaccine — as long as she can credit Trump for it
By Vanessa Taylor
So weird how Sean Hannity is super into the vaccine now
By Vanessa Taylor
Nancy Pelosi took a stand on the Jan. 6 committee, and it left Republicans whiny as hell
By Rafi Schwartz
Stay up to date