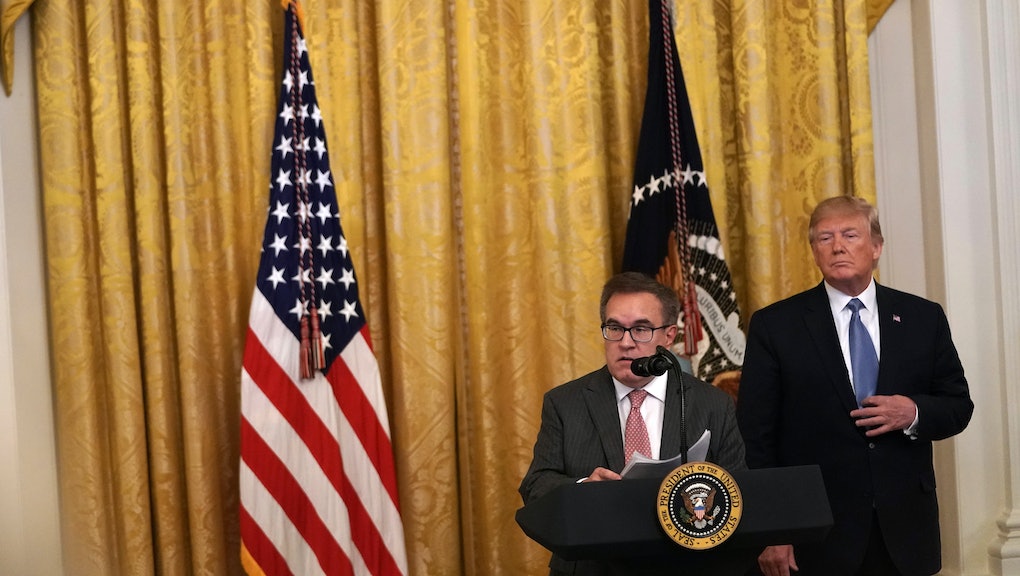 Trump did even more damage to the EPA than previously thought

Democrats hoping for the much talked about blue wave in the 2020 election finally seemed to get what they were looking for last night, as at least one and likely two Senate seats in Georgia were flipped by the party. That will create a 50-50 split in the Senate, which amounts to Democratic control with the Vice President breaking ties. Gaining control over that lever of government came at a crucial moment, as it appears the mess Trump left behind will require more clean up than previously thought. According to a report from energy and environment industry publication E&E News, the Biden transition team has been surprised to find that the damage done to environmental causes by the Trump administration runs deeper than expected.

Trump's ongoing attempts to curtail environmental regulation and hamstring the agencies that protect our planet have been well-documented, but it appears that the constant undermining of operations is even worse than previously reported. When Biden’s transition team started to look under the hood, they found that the Environmental Protection Agency had been gutted, reeling from a loss of more than 600 employees. That resulted in much of the agency's research grinding to a halt, with laboratories sitting unused and unstaffed.

On top of the shrinking workforce, Biden's team also found a bit of a budgetary mess within the EPA. Trump's cuts to the organization appear to have been designed to hamper the ability of the agency to enforce environmental protections. "Those [cuts] have been very carefully directed budget cuts to the very parts of the [EPA] that are going to be necessary to get rid of [Trump's] outrageous rollbacks," a senior transition official said on a call with reporters, according to E&E News.

The suggestion from these comments is that before the Biden administration can go to work actually enacting rules to combat climate change, they will first have to restore the EPA. That means staffing up and putting people in place to once again guide policy through research and science rather than doing favors for the fossil fuel industry. "In looking at those [regulatory] rollbacks, we sort of understood the task ahead was going to be daunting. But really, the rebuilding efforts across the government are going to be more extensive than we have understood before," the senior transition official said.

Last summer, more than 500 former EPA staffers and six former administrators at the agency laid out a thorough plan to rescue the agency, which could help guide the Biden administration through this effort. It's also worth noting that the Biden transition team has made climate change a top priority even outside the EPA and is making a point to place "climate-ambitious" people in positions throughout the administration.

That will be essential for a full-borne push by the Biden administration to address climate change in a meaningful way. Simply undoing the damage that Trump has done won't be enough, Biden will have to move the country forward if it hopes to answer the call and reach net-zero emissions by 2050, as called for by the United Nations and the Paris Climate Agreement. Biden will enter office with an ambitious climate plan and likely a Congress and Senate under Democratic control. Let's hope the hole Trump dug for us all isn't too deep to escape.