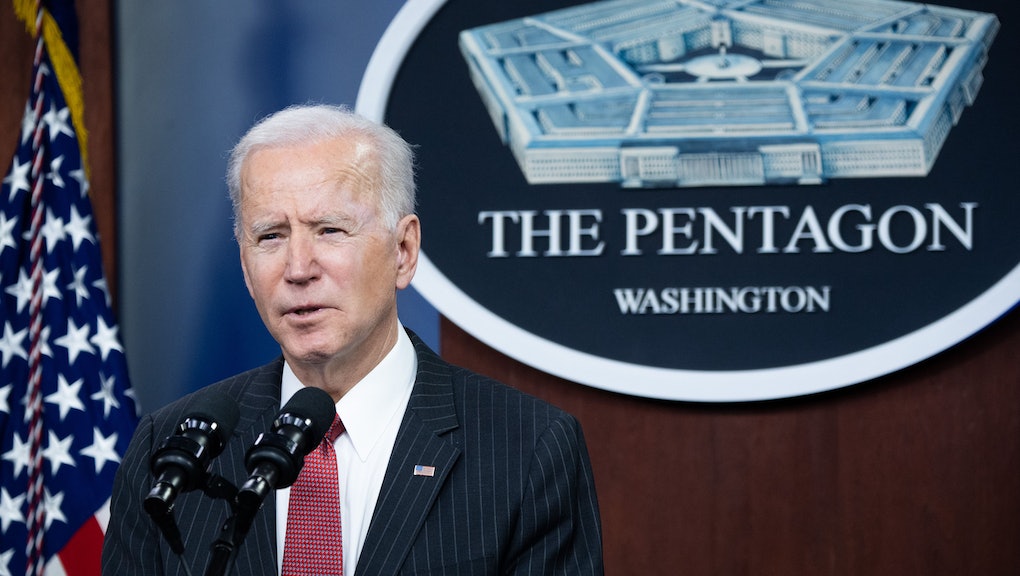 Under Biden, the Department of Defense has finally declared war on climate change

If climate change were a country, we'd be at war with it by now. President Biden promised to make the pressing matter his administration's top priority throughout every agency, and that now extends to the Pentagon. Earlier this week, the Department of Defense announced the formation of a working group that will focus on the effects of climate change the role that it will play in national security.

The group will be led by Joe Bryan, a former deputy assistant secretary of the Navy focused on energy issues during the Obama administration. Bryan was appointed as a special assistant to the secretary of defense last month; his background also includes working for the Atlantic Council, a think tank that focuses on developing global policy solutions, and serving as a clean energy consultant. Bryan has previously advocated for the U.S. to "rejoin the international community and recommit to aggressive cuts in [carbon dioxide],” noting that "Mitigating the worst impacts of climate change ultimately depends on significant reductions in global carbon emissions."

Involving the Department of Defense in the fight against climate change is a big deal because it brings one of the most well-funded federal agencies, and one that regularly sees increases to its massive spending budget year over year, into the climate change mix. By centering the climate crisis as a potential national security threat (and it very much is, just ask the Pentagon) the Defense Department can address the matter through a variety of means. One example would be to reduce the military's massive carbon footprint, which is larger than most countries.

By focusing its budget on preparing for the future threats of climate change, the agency could also invest heavily in renewable and sustainable energy technologies. After all, the Department of Defense owns and operates its own grid that could face threats from extreme weather conditions, like what hit Texas last month, and would benefit from modernization including adopting clean energy. And when the military invests in technology, it typically spurs the commercialization of that technology, which would allow the civilian grid to ditch dirty energy as well. The Pentagon could also follow the guidelines set by a Biden executive order to modernize the government's fleet and adopt electric vehicles.

While it's important that the Department of Defense is putting its weight behind addressing the threat of climate change, the fact is that this isn't exactly a revolutionary approach. Under the Obama administration, the Pentagon started recognizing climate change as a national security threat. That changed under former President Donald Trump, who instructed the agency to drop climate change from its list of priorities.

Shockingly, simply ignoring the problem did not make it go away. During Trump's time in office, study after study was published stating that climate change presents national security threats and could result in the complete collapse of some countries. Even the Pentagon under Trump's leadership issued a report noting that rising sea levels, global warming, and increased extreme weather events would make the agency's job harder.

It's good news that the Defense Department is back in the fold. But it's a shame that we wasted four years ignoring reality because Trump couldn't be bothered to understand the science.