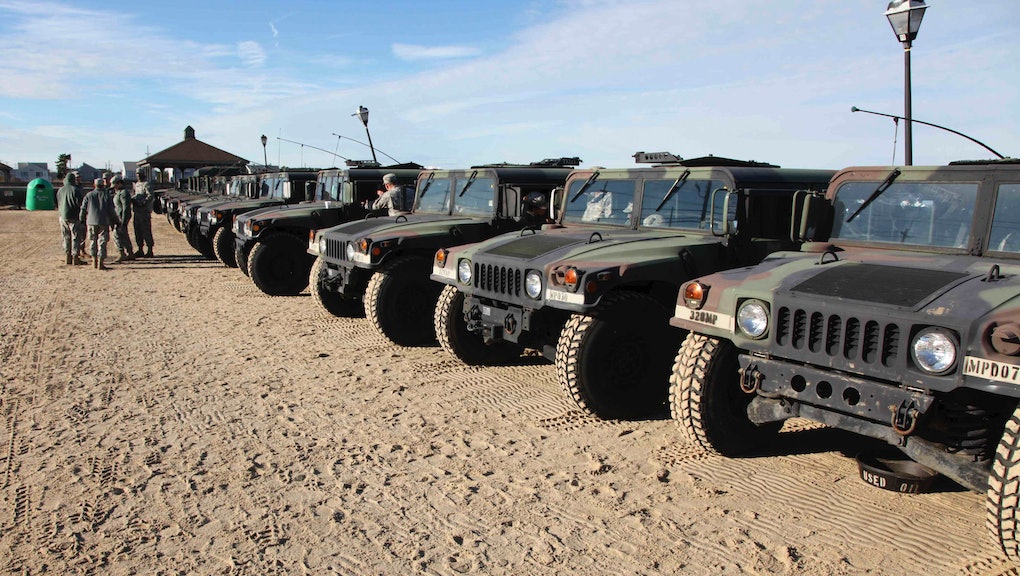 The news: On Tuesday, a group of former Pentagon leaders released a report on the most pressing issue to national security today. So was it terrorism? Benghazi? The economy?

No, it was the environment.

The report "makes a compelling case that climate change is no longer a future threat — it is taking place now. It observes that climate change serves as a catalyst of conflict in vulnerable parts of the world, and that projected changes in global migration patterns will make the challenges even more severe," wrote a panel of 16 retired generals and admirals, who make up the Center for Naval Analyses' Military Advisory Board, a federally funded research and development center (FFRDC) for the Navy and Marine Corps.

"We are dismayed that discussions of climate change have become so polarizing and have receded from the arena of informed public discourse and debate. Political posturing and budgetary woes cannot be allowed to inhibit discussion and debate over what so many believe to be a salient national security concern for our nation ... Time and tide wait for no one," they added.

Why this is important: The CNA report is the latest in a string of bad news regarding climate change. In March, the UN published an extensive report on rising sea levels and the increasing acidification of the oceans. Last week, the White House released a congressionally-mandated report concluding that global warming is real and has serious consequences for the United States.

And just this Monday, a joint study by NASA and the University of California, Irvine revealed that large chunks of the Western Antarctic Ice Sheet have already begun to collapse — and there is little we can do to stop it.

But the CNA report is unique in that it was written by those who were once top figures in the nation's defense, and who still hold great sway in America's defense and intelligence community. The generals and admirals of the CNA panel, who hail from all branches of armed service, include the likes of former homeland security secretary Michael Chertoff and former defense secretary Leon Panetta.

The bipartisan makeup of the panel also demonstrates how these retired officials have been able to reach a consensus on climate warming — while politicians in D.C. right now can't even agree on limiting carbon emissions by coal plants.

And these military leaders are right to be worried. Despite the fact that fewer than 3% of climate scientists believe that "humans are playing a relatively minimal role in global warming,"a recent Gallup poll showed that one in four Americans are "solidly skeptical" that global warming is real.

But in spite of this gap between science and public opinion, the military has been stepping up to address the very real effects of climate change.

As PolicyMic's Tom McKay reported last month, "The Navy for one has taken serious action to adapt to the future challenges of climate change and fuel scarcity, developing renewable seawater-based fuel for its warships. The Department of Defense views climate change as a very serious factor in future risk assessments. Military bases will deploy three gigawatts of renewable energy by 2025, enough to power 750,000 homes."

Secretary of State John Kerry and current Pentagon leaders have already agreed with the findings of the CNA report, and said it will influence American foreign policy and military policy. To what extent is another question, but for now the military and intelligence community appear united in the effort to mitigate climate change. It's time for the American public to do so as well.