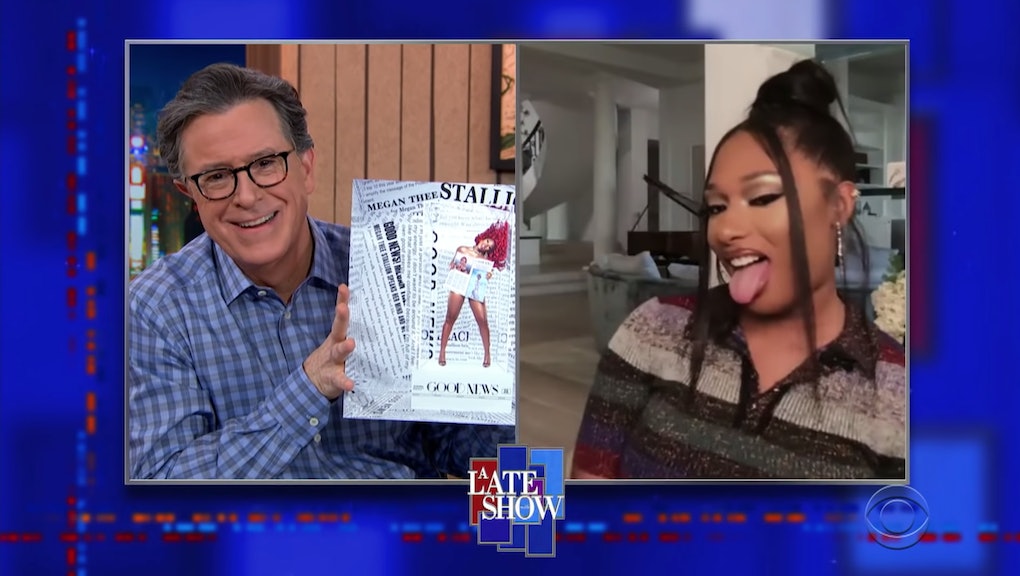 Megan Thee Stallion was a guest on Stephen Colbert last night. She challenged the comedian to the #BodyChallenge and he is surprisingly good at twerking! Just kidding, guys. Colbert didn’t do the #BodyChallenge. But his new friend Meg did explain to America’s dad what the #BodyChallenge entails — and why that song off her debut album Good News has become a body-positive anthem on TikTok and beyond.

It was such a cute interview! I mean, Colbert looked a little out of his depth, at times — for example, when Megan talked about admiring what the “quarantine 15” has done to her ass while checking herself out in the mirror. Megan told the Late Show host that’s what inspired her hit track “Body,” which subsequently spawned the #BodyChallenge where people do the dance from her music video on TikTok.

“The hook literally came from me dancing in front of the mirror, admiring my fluff,” Meg said, laughing. “That’s how we wrote the song! But it’s definitely about people just celebrating their bodies.”

“That’s very nice,” Colbert replied. “Because when I’m in front of a full-length mirror, I try to keep it as brief as possible these days.”

“No!!!” the reigning queen of rap protested. “You’ve gotta appreciate, let it marinate, let it sit, like… I like this! I like where this is going.”

Colbert spent much of the interview complimenting Megan, which feels like a fitting and correct amount of deference to pay to bonafide music royalty. It’s also quite remarkable that amid a terrible, trying year, Meg’s been on an unstoppable ascent. She’s enjoying amazing success and deserves every bit of it.

Meg talked about how surreal it is to have Beyoncé on speed dial these days. She recalled growing up in Houston, going to her first Destiny’s Child concert, and dreaming of being onstage herself one day. The rapper, who remixed her hit “Savage” with Beyoncé this spring, now turns to the superstar singer and her husband Jay-Z for advice. And while Beyoncé gives wise and measured counsel, Jay-Z’s a bit wilder.

“Jay-Z gives the fun advice,” Meg told Colbert. “Say if I’m having a bad day, he’ll be like, ‘Megan, you need to be turnt up. Have a good time, forget those people.' You know what I’m saying? He gives me the more ‘hot girl’ advice.”

“Beyoncé is more like, ‘Look queen, rise above.’ She says it the nicer way. And Jay-Z gives it to me the turnt up way,” Megan chuckled.

Meg and Colbert also discussed the “cultural conservatives” who got bent out of shape over “WAP,” her collaboration with Cardi-B, this fall. “Them people crazy,” Meg said. Watch the rest of her sweet interview with my favorite radical dad on late night, below.