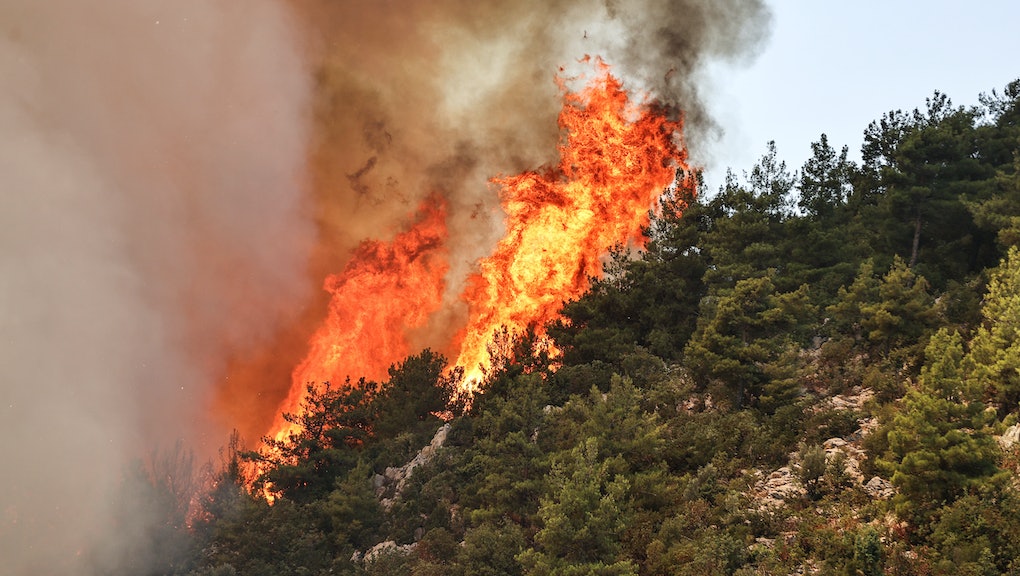 We waited too long to act on climate change, and now the world is on fire

Often when people talk about climate change, they'll use a hyperbolic expression to describe the planet's rising temperature — like saying that the world is on fire. Well, at the moment, it's not just hyperbole. Wildfires are cropping up all over the globe, torching millions of acres of land, sending thousands of people fleeing for safety, destroying ecosystems, and creating a slew of other unfortunate side effects like poor air quality that can linger even after the flames are put out.

In the United States, another devastating wildfire season is well under way. According to the California Department of Forestry and Fire Protection, 2021 has already seen more than 6,000 fires that have destroyed more than half a billion acres of land and 400 buildings, including homes. If history holds, the worst is yet to come, as bigger wildfires tend to hit later in the season when conditions are especially hot and dry. But that doesn't mean there aren't plenty of massive blazes burning right now, with the Dixie Fire — the largest ongoing fire in California — worst among them. The Dixie Fire has destroyed more than 300,000 acres of land on its own since it started last month after a power line from notoriously terrible utilities company PG&E sparked the flame. The wildfire, which is just 35% contained and is already the sixth-largest uncontrolled burn in the state's history, is forcing evacuations from a number of towns in its path. All told, it's expected to destroy dozens — if not hundreds — of homes and businesses as it continues to burn.

North of California, another wildfire that has plagued the west coast all summer is still burning. The Bootleg Fire, which started near the border of California and Oregon in early July, has destroyed nearly 500,000 acres of land and is the single biggest wildfire the U.S. has faced this year. The fire has burned at an uncontrollable rate, at one point growing by over 1,000 acres every hour; it even created its own weather system, generating storms and lightning strikes that made it even more difficult for responders to fight the flames. Smoke from the fire has grown so large and so dense that it has carried all the way to New York, creating degraded air quality across the country.

But it's not just the American West that's burning uncontrollably; fire season in Canada is every bit as bad as it is in the U.S. In British Columbia, there have been nearly 1,400 fires recorded already this year, with nearly 300 still active and new ones starting daily. Last month, the government of the provincial state declared a state of emergency because of the flames, evacuating thousands of people across the region and warning of likely destruction of homes and property. Thousands of firefighters have been deployed across B.C. to combat the flames, but hot temperatures and dry weather conditions have made it hard to stop the spread — and easier for new flames to spark.

The situation is equally dire in the eastern hemisphere. The Mediterranean has become one of the planet's biggest hotspots for fires, spurred by record-breaking heatwaves with temperatures topping 100 degrees Fahrenheit. Last week, Turkey was forced to evacuate tourists by rescue boats as wildfires pinned down a coastal vacation town. Thousands of people living in the Greek capital of Athens also evacuated as a wildfire burned forests on the city's outskirts. Smoke from these flames has plagued the city, which, as a result, currently has some of the worst air quality in the world. It's the hottest the region has been in decades, with some of the worst wildfires it has ever seen.

Even the famously frigid Siberia is on fire, battling its third year in a row of record heat and catastrophic wildfires — and the smoke from those fires has reached the North Pole.

Wildfires happen every year, but there is little question that they are getting worse — and that humans are to blame. As the planet warms due to human-caused climate change, it produces ideal conditions for fires to start and sustain. Drier air, less rain, hotter temperatures — it all creates kindling for the spark to take hold. While more can be done on the margins to stop the spread — like improving zoning policies, bettering forest management, and increasing resources for firefighting initiatives — the only way to truly make things better is by tackling the root causes of the climate crisis. That means cutting back on emissions, and fast. The Biden administration has taken some steps in this regard, setting a goal for cutting the country's carbon footprint in half by 2030 and, most recently, calling for half of the nation's vehicles to be zero emissions by the same year. But we need more than goals at this point: We need aggressive changes and enforceable regulations in order to make up for lost time. We waited too long to take climate change seriously. Now we're on fire.