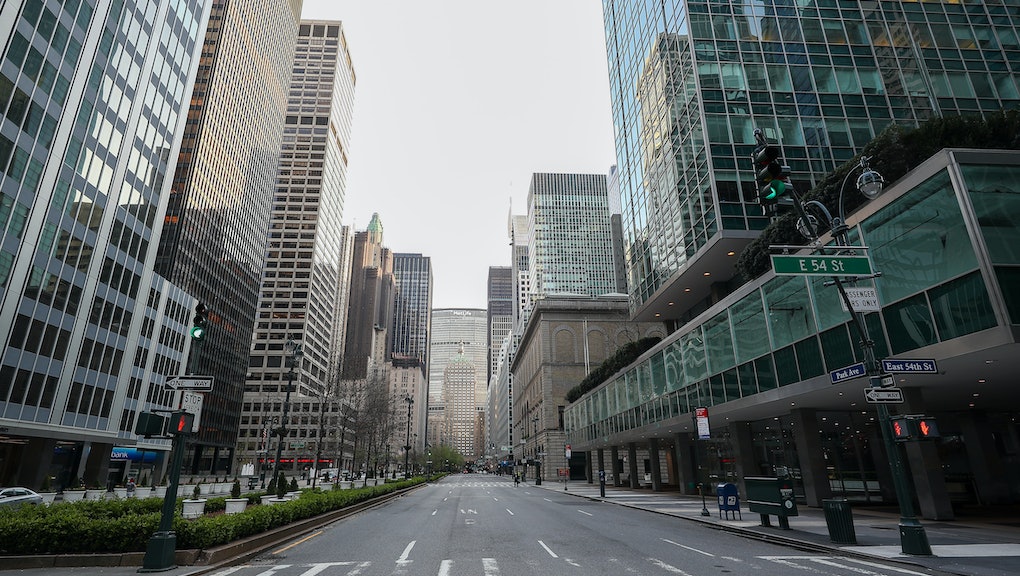 What will happen to the environment if we decide to abandon offices for good?

The limited mobility that has accompanied shelter-in-place orders implemented by federal and local governments around the world has undoubtedly had a positive short-term impact on the environment. A recent report suggests that global daily emissions dropped by as much as 17 percent while the world went into quarantine, and air pollution in heavily populated cities around the globe has cleared up with millions staying home. It's next to impossible to preserve all of those gains, but maintaining and even expanding work-from-home policies presents an opportunity to keep at least some of the decline in greenhouse gas emissions.

Gary Yohe, the Huffington Foundation professor of Economics and Environmental Studies at Wesleyan University, tells Mic that working from home is "short-term low hanging fruit [that] could turn into a piece of how emissions will be reduced." According to the Bureau of Labor Statistics' 2019 National Compensation Survey, just seven percent of American workers had "flexible workplace" or remote work options. A 2018 survey found just under one-third of workers report that their job could be completed remotely, creating a significant opportunity to keep some people at home. The coronavirus pandemic has created more remote work opportunities, with an estimated half of all Americans lucky enough to still be employed moving to work-from-home arrangements.

Work-from-home as a policy is unique in that it can be enacted quickly, as seen by the response to the coronavirus pandemic, and addresses one of the biggest challenges when it comes to reining in carbon emissions. "I think that one of the appeals of [remote work] as a climate policy is that it can do a lot right now in terms of just stopping people from driving to work," Matthew Butner, economic fellow at the Institute for Policy Integrity at the NYU School of Law, tells Mic. "That will reduce carbon emissions from transportation, which is one of the harder things to de-carbonize at the moment."

Transportation is the single largest contributor to greenhouse gas emissions in the United States, accounting for just over 28 percent of all emissions, according to the Environmental Protection Agency. Sixty percent of that comes from light-duty vehicles, the type of cars that most people count on to get to work. The commute time for Americans is also getting longer each year. In 2018, the US Census Bureau reported that the average American worker spent 27 minutes driving to work, meaning they spent just under an hour per day just getting to and from their jobs.

While adopting remote work policies is likely to produce a net-positive effect on greenhouse gas emissions in the short-term, it shouldn't be viewed as the only action needed — or even a guaranteed long-term solution. Eliminating the commute to and from the office does not guarantee that people won't drive at all during their work day.

"Every mile not traveled to work doesn't necessarily mean there are fewer miles traveled at all,” Butner says. "That's something that I think we don't have a good estimate on." Workers may make use of their newfound flexibility to work from other locations, perhaps traveling even more since they are not tied to an office during the day. It may also change what they do during work hours.

"At-home workers may get used to online shopping without concern that the boss will see, so that would reduce shopping trips, which is good for emissions," Yohe suggests. "But it would also increase the number of delivery vehicles and otherwise change delivery strategies, which is likely bad for emissions."

Working from home may have other cascading effects that are hard to account for. It may change the entire shape of cities as the need for large office buildings, and in turn housing, changes. "There are general equilibrium effects," Butner notes. "If nobody has to go to the office, and the offices are downtown, that decreases the demand for downtown housing. People can go move to the suburbs instead ... But if everybody is moving to the suburbs, maybe they'll be driving more, and people will have bigger plots of land." Those outcomes could potentially be bad for overall emissions levels.

Similarly, Butner notes that "large buildings might be overall more efficient than small buildings," so shifting to work-from-home could produce a slight increase in emissions from the energy sector, though it's no guarantee. "If your lights are on when you're home anyway, then maybe there won't be an increase in emissions. It's really hard to pin down," he says.

Derek Lemoine, an associate professor of Economics at the University of Arizona, also raised this potential trade-off. "I’m not sure whether home or office environments use more energy," he says. "Many offices are probably more efficient per square foot … However, working from home may avoid conditioning two distinct spaces throughout the day, if houses were conditioned while at work but offices don’t need to be while working from home. That reduction in energy use seems like a clear environmental benefit."

Remote work will not save the planet, nor is it likely to single-handedly produce such a reduction in emissions that it would help preserve the drop off caused by shelter-in-place policies. But it does present the opportunity to reduce some emissions and should be viewed as a potential catalyst for other changes. It is one of the few policy solutions that can be implemented almost immediately and can have a positive impact while longer-term solutions, like the adoption of electric vehicles and changes to the infrastructure of cities, occur. It won't solve climate change, but it certainly won't hurt.

More like this
Heat waves are killing baby birds by forcing them to flee their nests before they can fly
By AJ Dellinger
QAnon queen Marjorie Taylor Greene got suspended from Twitter for spreading coronavirus misinformation
By AJ Dellinger
Amid daily reports of catastrophe, Americans are finally starting to realize climate change is bad
By AJ Dellinger
Stay up to date