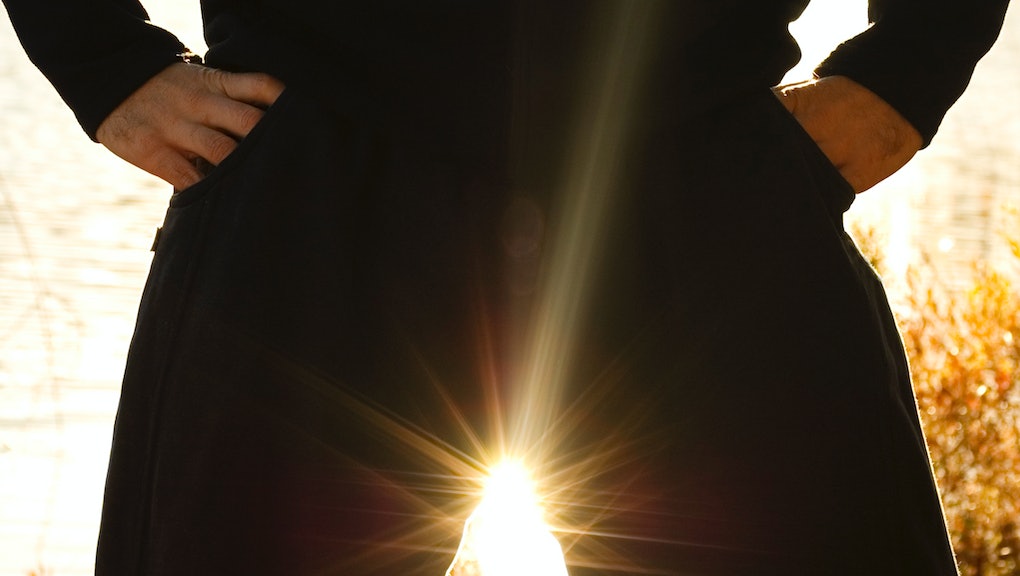 What your morning wood says about your health

The colloquial phrase, “the early bird catches the worm” must refer to penises because they are, universally, early risers. More often than not, a dick will awaken before you do, and morning wood is simply a fact of life. Penis-havers everywhere are familiar with the habits of our best friend/occasional worst enemy. And yet, not many, myself included, knew that the state of our first woody of the day is a valuable indicator of what else is going on in your body.

First things first: The technical term for your wake-up drawbridge situation is nocturnal penile tumescence, which sounds fancy but just translates to “night penis swelling.” You may be wondering about the time-of-day discrepancy here, but they’re labeled as night events because we’re not awake for most of them. In fact, it’ll happen quite a few times if your bits are in healthy shape — about 3 to 5 times, typically. That’s right, our penises are doing yoga while we sleep, and the only pose they know is cobra.

Morning wood, like yoga, might seem purely sexual — but it’s not nearly so simple. “Nocturnal penile tumescence is not related to sexual stimulation,” says Karyn Eilber, associate professor of urology, obstetrics and gynecology at Cedars-Sinai Medical Center. It’s often simply tied to our REM cycles, a stage of sleep where dreams also generally occur. “NPT will only occur in the morning if REM sleep happens to occur in the morning,” Eilber says. “Testosterone levels also tend to be highest in the morning which can also contribute to waking with an erection.”

Eilber adds that the cause of your daily salute is the hormone norepinephrine — or rather, the lack of it — while you’re sleeping. Norepinephrine is a hormone and neurotransmitter that plays an important role in the sleep-wake cycle. It helps you to wake up, increasing attention and focusing on performing a task, and in memory storage.

It’s also important for emotions, as it plays a role in the fight-or-flight response by relocating blood to the parts of your body that needs it. Since you’re not doing laps while you’re asleep, there’s a decrease of that hormone. And since norepinephrine prevents erections by limiting blood flow to the penis during REM sleep, a decrease in the hormone leads to an erection.

If you haven’t had a morning salute in a while, it could indicate a few things. “​The lack of NPT can indicate erectile dysfunction, but it can also point to a hormonal imbalance — low testosterone, namely — decreased normal blood flow to the penis (like with vascular disease), or simply not getting enough REM sleep,” Eilber says.

An usual lack of morning wood can also indicate underlying issues with your blood flow in general and even your heart, weirdly enough. Now don’t freak out, because that’s not true of all cases. Lack of NPT paired with not having normal erections during sexual activity, however, is a sign that you should consult a doctor to see if there’s anything amiss with your cardiovascular health — even if you’re relatively young.

In addition, certain lifestyle choices — how much you drink, use drugs of all types, and exercise — can affect the presence (or lack of) a morning pocket rocket. Moderate alcohol intake shouldn't affect NPT, but medications and activities that impact REM sleep can, Eilber says. That means that your morning wood is a reliable indicator for if your body is generally happy with your habits or if it’s rebelling against a less than savory daily routine of doughnuts, beer, and inactivity.

And of course, stress also has an effect on your morning wood. Look at it this way: If you’re not sleeping well — as in completing all the phases and getting enough hours — your dick might let you know by not greeting you in the morning. Ironically, erectile dysfunction can be caused by stress, i.e. psychogenic ED. “One relatively common scenario is a man with a new partner who gets performance anxiety and can't perform, or a man can't get an erection because he's been drinking too much then next time he can't get an erection because he is so stressed about not getting an erection the time before,” she adds.

Just like a check engine light doesn’t always mean your engine is shot, not having morning wood is an indication that you might need to look in further into why it’s happening — a dick diagnostic, if you will. That being said, don’t get too overconfident about your morning wood as the paramount indicator of your overall health — they’re one part of a whole set of mechanisms our body has set up to help us stay alive.

Honestly, I never thought to ask why morning wood happens, but now that I know, I may give my toy soldier a lil’ salute for being such an unsung hero, landing assists in several areas when needed. Thank you for your service, champ.