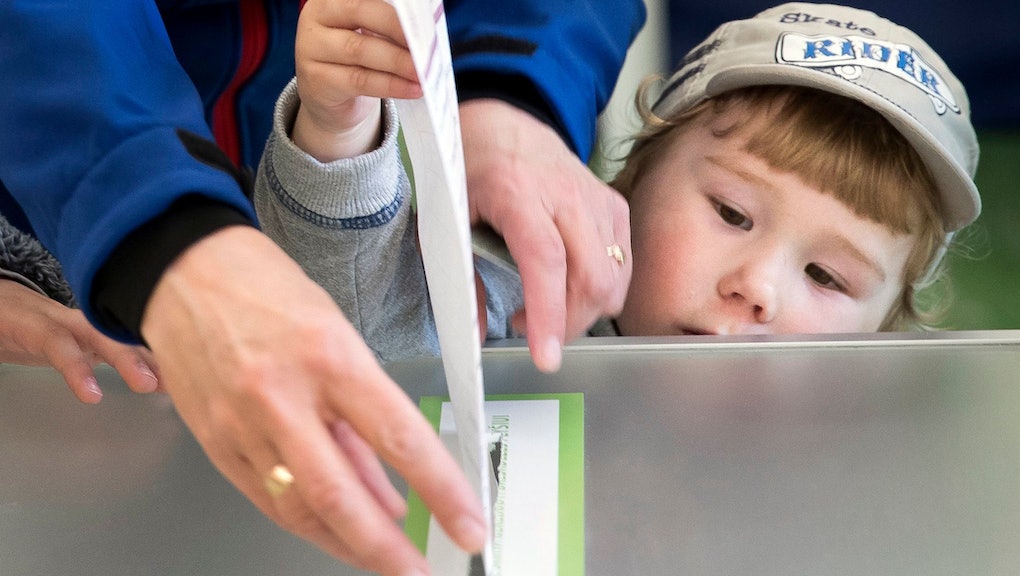 Why lowering the voting age would make for a better democracy

In 2016, Mari Copeny wrote a letter to President Barack Obama to ask him for help addressing a problem in her hometown. Copeny, a resident of Flint, Michigan, wanted Obama to visit the city to address the ongoing water crisis. "I've been doing my best to march in protest and to speak out for all the kids that live here in Flint," Copeny wrote, referring to the city's tainted water supply due to government corner-cutting. She added that she was going to travel to Washington, D.C., for the congressional testimony of Rick Snyder, then the Michigan governor. At the time, Copeny was 8 years old.

In the five years since Flint's water crisis began, Copeny — also known as "Little Miss Flint" — has continued her activism. But while she's provided nearly 17,000 Flint kids with school supplies, raised well over $100,000 for water filtration technology, and handed out hundreds of thousands of water bottles to Flint residents still skeptical of the city-provided water, the now-12-year-old hasn't been able to tap into perhaps the most fundamental resource Americans have to effect change in their democracy: the ability to vote.

Copeny has been vocal about her inability to vote, and how her future depends on older Americans making the right choices. She's not alone as a young activist who has demanded action from her representatives on the issues close to her, either.

After the 2018 shooting at Marjory Stoneman Douglas High School in Parkland, Florida, young activists, most of them high school students under 18, began organizing protests and lobbying politicians on gun control immediately after the tragedy had occurred. This summer, Swedish 16-year-old Greta Thunberg crossed an ocean, addressed the U.N., and helped organize a worldwide youth climate protest that brought thousands of young Americans into the streets to demand change. Consider Gavin Grimm, the transgender student who was denied the ability to use the restroom that aligned with his gender identity at his public Virginia high school. In 2015, as a high school sophomore, Grimm filed suit to protect his civil rights — one year before North Carolina passed its transphobic "bathroom bill" and several before the Supreme Court agreed to hear a case on trans rights in the workplace.

These young people are doing the work to address political issues that directly affect their health, their safety, and their future. They can speak to international bodies, they can lobby politicians, they can march, they can organize. They're directly engaging in the political process in powerful ways, yet they can't cast a ballot.

In California, at least for some young people, that may be changing. In August, the California Assembly passed an amendment to the state constitution (ACA 8) which would lower the voting age from 18 to 17. The bill now goes to the state Senate, where it needs 27 of 40 votes to pass. If it passes the state Senate, the public would get their chance to vote on the rule change, most likely in a November 2020 ballot measure. If voters approve, 17-year-olds in California would likely be eligible to vote in the 2022 midterms.

"The bill hasn't passed yet," Melissa Romero, legislative affairs manager of the California League of Conservation Voters, told Mic. "But it's gotten farther than it ever has before. We're confident that once senators have the time to hear from young people in California, that people will be convinced of the need and the interest that young people have in participating in elections."

CLCV is sponsoring ACA 8 for a couple of reasons, Romero explains. The first is that young people have political opinions and interests that they should be able to express. "Young people right now are seeing firsthand the consequences of sitting out an elections," Romero says. "They are more organized than ever, because quite literally, their futures are at stake."

In 2018, 31% of eligible voters between 18 and 24 cast ballots in the midterm election, up from 21% in 2014. It was the highest level of youth voting in a midterm in at least 25 years. The spike in voting by younger people, along with the wave of youth activism, indicates a new intensity of political engagement. But there's more work to be done.

That's another argument for lowering the voting age — simply put, fewer barriers means more ballots, and not just for the young. Setting the voting age at 18 creates a bottleneck for political participation that stifles all of American democracy, youth activist Tyler Okeke, formerly of the group Power California, told Mic. "Eighteen is a time when a lot of students are moving off to college, they're changing addresses, they're living on their own. They're making a lot of big life changes, and it's not a great place to introduce voting," Okeke, himself 18, explains.

Just look at us, talk to us, see what we're doing. ... Pick up a newspaper. Look around at the many movements we already lead.

Okeke is extremely politically active and engaged; he's been working on youth voting initiatives for years, and he plans to pursue a career in politics and government. Yet, he points out, as a new student at the University of Chicago, even he doesn't have a clear sense of how to register to vote, nor is he familiar with the political institutions and organizations in his new home.

The fact that we introduce people to voting just as their lives are most disrupted has significant longterm effects. A number of studies have indicated that one of the strongest predictors of voting is whether you voted in the last election. People vote because they've voted in the past; it's a habit.

But it's difficult to develop that habit at a time when young people are just leaving home and striking out on their own. It makes a lot more sense, Okeke points out, to start voting at 17 — or even 16, which is his personal preference — when students are learning about American history and government in school. "If we coupled the introduction of voting with civic education, we can build habitual voting," he says.

Getting people acclimated to voting has benefits, but youth voting skeptics worry that young people aren't ready for the responsibility. "They simply haven’t matured to the level that they can make those types of decisions," Massachusetts Republican Jim Lyons has argued.

One typical argument against youth voting is that young people's brains aren't fully developed. This is true, but it's also true of people who currently have the right to vote, as brains aren't fully developed until people are 25. Meanwhile, cognitive decline may begin as early as 30. It doesn't take a math whiz to calculate that the current law may be limiting perfectly capable young people from casting a ballot. Of course the right to the franchise should be based on more than generalized neuroscience, but if we're going to argue that young people aren't intellectually advanced enough to vote, it's a point worth making.

Detractors also often allege that young people don't know enough about current events and politics to vote responsibly. Okeke notes, however, that researchers have found no meaningful difference between the civic knowledge of 16-year-olds and that of people ages 18 to 24. Lowering the voting age in other countries — like Scotland, for example, where people can vote starting at 16 — hasn't resulted in civic disaster. (It wasn't Scotland that voted for Brexit.)

Certainly, Okeke, who only recently turned 18, seems informed enough to cast a ballot given he can rattle off studies and voting statistics. "Just look at us, talk to us, see what we're doing," he says of young people. "Pick up a newspaper. Look around at the many movements we already lead."

Of course, it's true that some young people are not well-informed. But it's undemocratic to exclude them from the vote on that basis, argues Michael Cummings, a professor of political science at the University of Colorado at Denver who has studied youth voting issues. "In a democracy, the citizens should have a right to vote because public policy affects them," Cummings told Mic. "In a democracy, we don't say, 'How smart are you? Oh you're pretty smart, so we'll let you vote.'" In fact, the U.S. has specifically outlawed literacy tests because they were used in a discriminatory way to prevent black people and poor people from exercising the franchise.

Many of the arguments used to deny young people the vote are the same as those used in the past to deny poor people, black people, and women; all groups were also said to be too ignorant or otherwise unqualified. Excluding large categories of people results, Cummings says, in "flawed, weak democracies." There's also the simple fact that some older people aren't particularly well-informed either, but they get to cast a ballot without anyone batting an eye.

Over time, Cummings says, our democracy has become more complete and less partial as more people have won suffrage. He'd like to see the voting age eliminated; in his perfect system, young people could start voting whenever they felt interested enough to do so.

Eliminating the voting age altogether is unlikely, but California could lead the charge. If the biggest state in the union lets 17-year-olds vote without mishap, the rest of the nation might start to think more seriously about Massachusetts Rep. Ayanna Presley's proposal to reset the voting age to 16 nationwide.

Young people are affected by gun laws and greenhouse gas regulations. They're affected by education funding and by transphobic bathroom bills. The state compels them to go to school, taxes them when they work, and regulates their health care. When they don't have a vote, they don't have a say in their own government, and that means they have little defense if they are exploited, ignored or — like the Parkland students — assaulted.

Democracies are less equal and less just when they exclude certain groups from voting. Lowering the voting age will make kids stronger — and that will make the country stronger, too.

More like this
Republicans aren't even pretending to be interested in democracy anymore
By Rafi Schwartz
The Chauvin trial is incapable of delivering real justice
By Vanessa Taylor
New York has set aside a massive, first-of-its-kind fund for undocumented workers
By Rafi Schwartz
Stay up to date