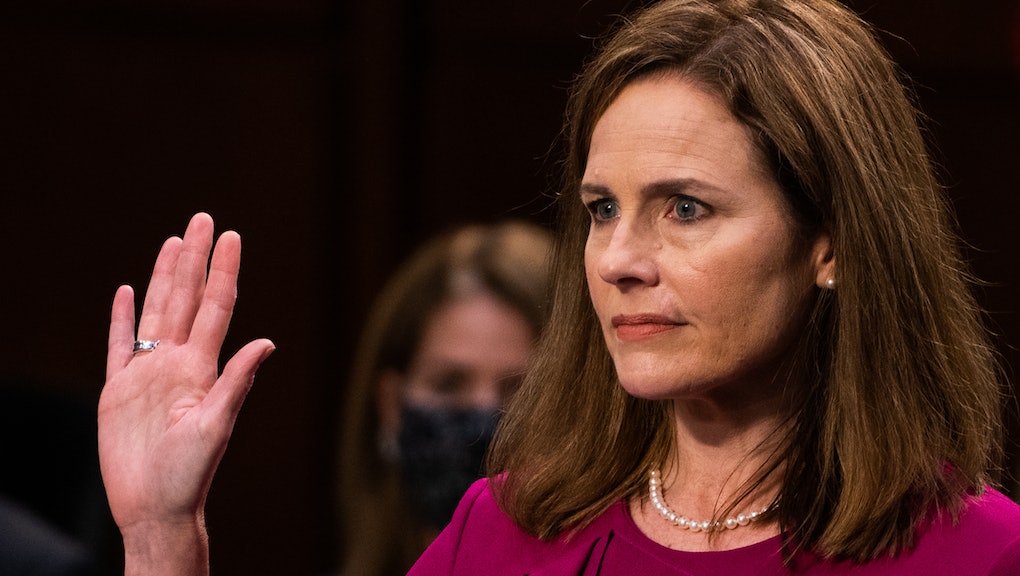 With Amy Coney Barrett on the bench, minority rule could strip rights from a majority of Americans

Welp. With a Senate vote of 52-48 on Monday evening, Amy Coney Barrett was officially confirmed to the Supreme Court of the United States. She was sworn in by Justice Clarence Thomas, a fellow Republican appointee with a controversial confirmation process. Every Republican senator except Maine's Susan Collins voted in favor of the confirmation, and every Democratic senator voted against it, making this confirmation vote the first one to succeed without securing any votes from the minority party since 1870. Barrett’s confirmation also cements a conservative majority on the Supreme Court for decades to come. Five of the nine justices were appointed by Republican presidents — two by George W. Bush and three by Donald Trump — who lost the popular vote in their first presidential elections.

Now, a collective of mostly straight, cisgender white men, who literally represent a minority of the U.S. population have paved the way for the removal of some of our most critical hard-won fundamental rights.

For many people, the most pressing issue remains the Affordable Care Act. The new Supreme Court is preparing to hear a case just a few days after the election that might overturn the law and declare it unconstitutional. The case stems from the Republican-backed tax cut bill that passed back in 2017. In summary: Republicans passed a tax law that gutted a crucial part of the ACA, and are now arguing that ACA is rendered unconstitutional because of that law. Worst case scenario? The now-solidly-conservative SCOTUS rules against the ACA, immediately eliminating health care coverage for at least 20 million Americans, even though the law itself is broadly popular.

Meanwhile, the pandemic the Trump administration has been struggling to contain has now claimed more than 225,000 lives in the U.S. and is currently on track to set new daily records with case numbers higher than we’ve seen since the pandemic’s beginning this spring. The dramatic unemployment rates spurred by the pandemic-panicked economy become all the more concerning when you consider how many Americans depend on their jobs for health insurance. Adult children 26 years old and younger who could previously stay on parents’ health plans would no longer have that option if the ACA is struct down by the Supreme Court.

Reproductive rights advocates have also been sounding the alarm about Barrett’s position on the Supreme Court, reminding us that Republicans have been scheming and strategizing to overturn Roe v. Wade for generations. It's basically the thing that carried Trump to office. Now, a conservative majority on the high court could finally deliver that verdict, without much of a fight. It’s important to note again here that the majority of Americans do actually want abortion to remain legal and oppose the overturning of Roe v. Wade. According to the Pew Research Center, 61% of Americans say abortion should be legal in all or most cases, and 70% of Americans are against overturning the landmark ruling.

It needs to be stated plainly, so I’ll state it plainly: If SCOTUS overturns Roe v. Wade, it will be five or six individuals, appointed by presidents who represent a minority of Americans, who are going against the preferences and interests of the majority of the country. Minority rule gives them the power to do it anyway.

As more and more people question the future of American workforce — and come to terms with how incredibly precarious and exploitative it very often is — we’ve seen a rise in labor rights organizing and pro-union efforts in industries across the board. In the wake of Occupy Wall Street, movements like the Fight for $15 living wage fight, the reinvigorated teacher-led strikes in major cities across the country, and Sens. Bernie Sanders’s and Elizabeth Warren’s wealth tax plans have all made workers' rights a key issue of the last decade. We’ve also seen renewed energy from conservative groups and politicians pushing anti-union legislation like “right to work” laws at the state level to hurt workers’ abilities to advocate for themselves and each other. The Supreme Court’s 2018 ruling in the case of Janus v. AFSCME delivered another blow, helping to undermine public sector unions.

The last several months have demonstrated just how easily any stability or consistency we’ve tried to build for ourselves can slip away.

Adding Barrett’s track record of siding with corporations to the bench paves the way for a Supreme Court that is open to dismantling fundamental rights in both our personal lives and in our professional lives. Just a month before Trump nominated Barrett for the Supreme Court, she delivered a ruling that allows corporations to completely skip paying some of their workers for overtime.

The last several months have demonstrated just how easily any stability or consistency we’ve tried to build for ourselves can slip away, and how quickly rights can be stripped if they aren’t being diligently protected. Our rights are only permanent so long as the law holds. We can lose them if they aren’t actively being protected against the malicious actors.

For countless already vulnerable Americans, the instability of those rights and living conditions is an everyday anxiety. Barrett's ascendance to the bench only makes that anxiety more acute. Generations of marginalized people have been fighting to secure what we’re told is the American Dream; it's a struggle that predates Barrett’s confirmation, the pandemic, and Donald Trump becoming president. But now even the handful of landmark legislative wins that have given marginalized populations conditional access to democracy are under threat.

Minority rule has put the majority of us at risk of losing the rights we rely on to build and sustain our lives. The upside? We are the majority. And we have the numbers to fight alongside each other, protect each other, and win — eventually.