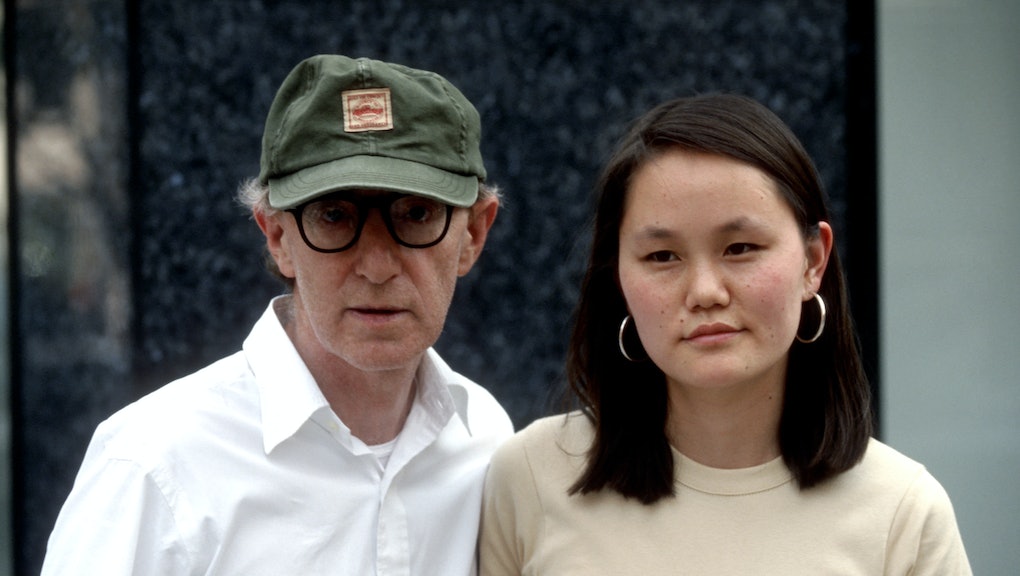 Woody Allen's book might still get published in France

Apropos of, well, a lot, Woody Allen's French publisher vowed he’d "do everything" possible to ensure the publication of the disgraced filmmaker’s autobiography, Apropos of Nothing.

Last Friday, Allen’s stateside publisher, Hachette Book Group, cancelled the planned release of his book in April. But the company only changed its tune after its other clients, its employees and the public raised a ruckus. Hachette staffers walked out of its US offices on Thursday protesting the intent to publish Allen’s memoir.

Manuel Carcassonne, director of Éditions Stock, the Hachette affiliate that has the French rights to Apropos of Nothing, promised to pursue the project despite his US counterpart’s decision. “Woody Allen is a great artist, filmmaker, writer, and his New York Jewish humor can still be read in every line of this autobiography — in self-mockery, modesty, and the art of disguising the tragic in comedy,” he said in an interview with French magazine Le Point on Monday.

“It’s sad that this decision was made — sad for the freedom of expression — but perfectly understandable in the American context,” Carcassonne added.

Ronan Farrow, the acclaimed journalist and Allen’s biological son, cut ties with Hachette last week in the wake of the book scandal. A division of the publishing house released his seminal work of #MeToo nonfiction, Catch and Kill, last fall. Farrow wrote a scating email to his publisher, obtained by The New York Times: “As you and I worked on Catch and Kill,” which was “in part about the damage Woody Allen did to my family,” it read, “you were secretly planning to publish a book by the person who committed those acts of sexual abuse.” At the end of the message, he wrote, “Imagine this were your sister.”

His sister, Dylan Farrow, Allen’s adoptive daughter with the actress Mia Farrow, also condemned the potential book. In 1992, when she was just seven, she accused Allen of sexually molesting her and has maintained her claims into adulthood. The allegations are deeply entangled with Allen’s relationship with another of his longtime girlfriend Mia Farrow’s adoptive daughters, Soon-Yi Previn, who is 35 years younger than him. They’ve been married since 1997.

France has been somewhat of a haven for Allen — or at least his work — since Hollywood began distancing itself from the director in the wake of #MeToo and #TimesUp. His last film, A Rainy Day in New York, starring Timothée Chalamet and Elle Fanning, was dropped by Amazon Studios in 2019 and wasn’t distributed in the US — though it did screen in France. (The film was shown across Europe, as well as in South Africa, some countries in Latin America and Asia.)

Allen’s embrace overseas is somewhat reminiscent of the way France repatriated controversial film director Roman Polanski, who fled the US in the 1970s after he was charged with drugging and raping a 13-year-old in Los Angeles. He pled guilty to unlawful sex with a minor but skipped town before his sentencing. Surprisingly, Polanski’s star never dimmed in France, where he’s considered a brilliant artist.

Just last month, the director won the top prize at the 45th César Awards, known as the “French Oscars,” for his film J’accuse. When Polanski’s name was announced, however, a number of artists walked out of the ceremony — including Céline Sciamma and Adèle Haenel, filmmaker and leading actress of the acclaimed Portrait of a Lady on Fire. Haenel shouted, “Bravo, pedophilia!” as she exited the room. Their walkout fueled tons of online buzz, and Polanski’s recognition at the César Awards incited actual riots in Paris. Allen’s French publisher seems to think there’s still an audience for him in the country, but the tides of popular opinion there could be changing fast.

“France was not the place of family quarrels between Woody Allen and his former partner Mia Farrow, nor with Ronan Farrow,” Carcassonne told Le Point. “The French public will decide, as it has decided by going to see Woody Allen’s last film, which could not be released in the United States,” he said.

Allen and Polanski aside, France was rocked by another cultural scandal involving a serial predator earlier this year. In early January, a memoir titled Le Consentement, or “Consent,” by Parisian publisher Vanessa Springora was released, detailing the author’s alleged relationship with famous French writer Gabriel Matzneff when he was in his 50s and she was just 13. Matzneff detailed his exploits with underage girls and boys in his work for years. After Springora’s book dropped, however, a Paris court charged Matzneff with promoting the sexual abuse of children.

Justice is coming for predators. Even in pockets of the intelligentsia where notions of consent and abuse were warped by the insistence that art be separated from the character of its creator. It’s not proof of anything, but all you have to do is revisit Manhattan for a glimpse into Allen’s twisted psyche. Maybe a botched book deal should be the least of his worries right now. As the comedian and author Cameron Esposito put it in a beautifully-penned essay for Vanity Fair: “Wouldn’t it be great if things were just a little more difficult for him?”