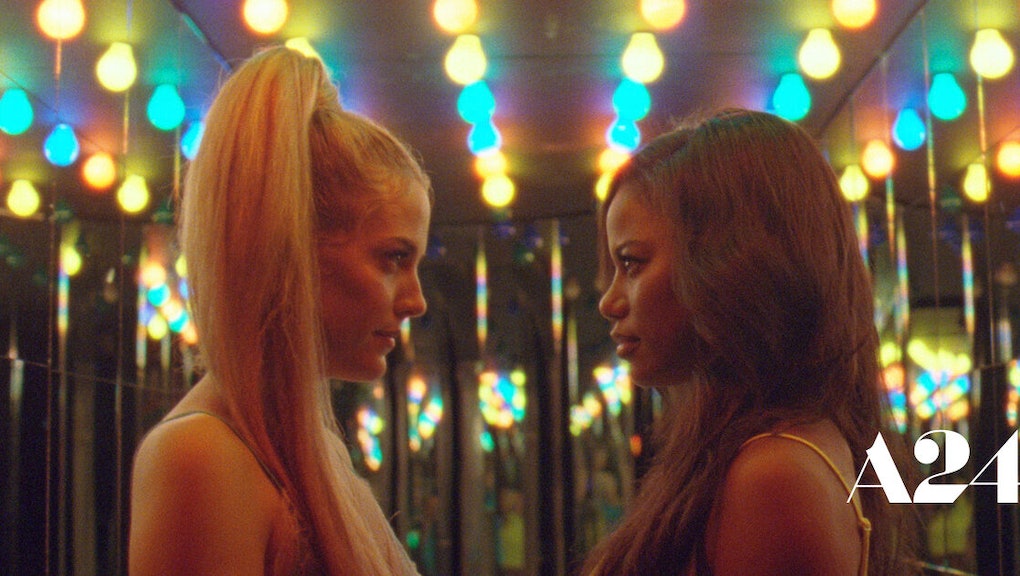 Twitter is cacophony, which makes the narrative precision of Zola, the new film adapted from Aziah “Zola” King’s now-legendary 148-tweet thread, a miracle. Director Janicza Bravo, who notably does not have her own Twitter account, arranged King’s tale of a “hoe trip” gone cataclysmically wrong into a cohesive narrative. At 80 minutes in length, the movie plays briskly and watching it presents less of a chore than reading the thread. (Though the thread is worth reading from start to finish if you want the full experience).

Bravo doesn’t throw away the Twitter factor completely, though. The film works because she isolates the discord of Twitter dialect and finds ways to express it on screen. Logging onto Twitter means dealing with noise; everyone has their opinions, and their opinions about everyone else’s opinion, and no opinion on Twitter is shared without comment. That’s part of the appeal of the platform, according to its endlessly shifting prompts and taglines: “Start a conversation.” “It’s what’s happening.” “What are you doing?” With the tap of a keyboard, we’re connected to both with friends and also legions of strangers weighing in on anything and everything we have to say.

The virality of Zola’s thread was due to its own unique Twitter prompt, the enticing invitation to “hear a story about why me & this bitch here fell out.” What Zola had to say was shocking, not just on the merit of being said, but because she was talking about real events she experienced and witnessed. The story begins when Zola was approached at her waitressing job by a white woman named Jessica; she agreed to embark on what Jessica called a “hoe trip” from her home in Detroit, all the way to Florida, where they would rake in cash by dancing in the Sunshine State’s strip clubs. But nothing went according to plan. Jessica brought along two companions, her inept boyfriend and her abusive pimp, intent on “trapping” (slang for prostituting) in between dancing.

In the movie, Zola, played by Taylour Paige, maintains her poise once she realizes that Jessica—here renamed Stefani and played by Riley Keough—lied to her. She’s pissed, but she mostly keeps that to herself; only Bravo’s viewers are granted unfettered access to Zola’s inner dialogue, until Stefani’s lie escalates and Zola tells her what she thinks without pulling punches. Whether she’s quiet or candid, Zola’s lines split between Bravo’s original writing and King’s own words from the original thread. “Bitch, you got me f**ked up!” Zola bellows when Stefani lures her to a swanky hotel for a night of trapping; earlier in the film, she tells Stefani that “I had to f**k him calm,” referencing her boyfriend and his anxiety over Zola’s itinerary. Zola quotes both exchanges directly from King’s Twitter thread.

Zola is a product of Twitter’s defining convolution as well as its facility for telling human stories. Bravo crafts Zola with a cringe comedy aesthetic while leaving space to stage the back and forth documented in King’s Tweets with a combination of dialogue and voiceover. Bravo also supplies words for Zola’s thoughts. The movie breaks the fourth wall in freeze frame as Zola exposits in voiceover. She even explains stripper jargon when translation is necessary.

Narrator asides in cinema aren’t a recent invention. Henry Hill runs down the particulars of mob life through voiceover in Goodfellas; the actor Daniel Giménez Cacho pauses the action in Y Tu Mamá También to teach viewers brief history lessons on the film’s social and political contexts. But where voiceovers in these movies give viewers windows into the protagonist’s unspoken feelings, Zola’s voiceovers reflect how Twitter works as a means of communication.

When Bravo halts the story so Paige can make observations to viewers, or when Stefani briefly, gracelessly butts in to reframe the story from her own point of view in the film’s most hysterical sequence, Zola represents Twitter with shocking fidelity. When Derek (Nicholas Braun), Stefani’s pathetic, hapless boyfriend, confesses to Zola that he knows everyone thinks he’s an idiot, he’s replicating a thread hijack. The distinction between use of voiceover in other films and Zola’s asides is slim but meaningful, and it could possibly open the door to more Tweet-to-film adaptations. Zola argues in Twitter’s favor as fertile ground for storytelling material, for cinema and for narrative art writ large. If the film hits the zeitgeist’s nerve center, directors, showrunners, and screenwriters may take to Twitter in search of stories to mine from mobs of users screaming back and forth at each other — and sometimes into the void. (Okay, mostly into the void.)

Bravo had the fortune of finding a story with an obvious three-act structure and emotional arc, which suits her personality as a filmmaker who looks for humor in uncomfortable exchanges and situations. Lemon, her 2017 feature debut about a man in arrested development whose life and marriage rapidly crumble before his eyes, finds compassion in human indignities and distress. Zola occupies a similar space. It applies the key traits of Bravo’s cinema to the most distressing environment of all, Twitter, where even minor engagement risks confrontation with indignant strangers over your use of the Disappointed Black Guy meme.

Zola grafts artifice onto reality, resulting in a movie that’s one part nerve wracking and two parts cathartic. Zola and Stefani’s meet-cute ends with; a Twitter “like” heart flashing We know we’re watching something happen in a movie that happened in real life first, but and at the same time we’re reminded of the dangers of real life colliding with online life. Stefani is a predator, Zola is her prey. Their introduction doesn’t look dangerous, but it is.

After returning to Detroit in one piece in 2015, King hopped on Twitter to let the world know what she saw and what she endured. Her 148-tweet thread is her catharsis. In the movie, where Zolabreaks the fourth wall to mirror the flow of threaded Twitter discourse, the app reads like a lifeline; she’s stuck with Derek, X, Stefani, and other unsavory figures on this journey, and each aside functions like a tweet fired off to everyone watching her plight.

Zola’s creative dramatization of the app’s user experience will resonate for any viewer with a Twitter handle. But the movie ultimately tells the story of Zola rather than a story of Twitter. Bravo relays Zola’s chronicle by incorporating the app’s phraseology into her medium, treating it as a tool instead of a fixture; most importantly, she never pulls focus from her lead. Paige commands every single frame, soaking up Bravo’s minimalist, wide-shot style within the grime and glitz of Zola’s backgrounds. Her radiance produces an empowering effect amid the sleaze. Janzica Bravo’s film takes King’s mispent weekend and turns it into art. Fourth wall breaks aren’t new. Voiceover isn’t new. “Disastrous road trip” movies aren’t new. Zola filters these elements through social media, and what comes out the other side is something all its own.

More like this
A #MeToo’d Ryan Adams made his bed and now seems pretty uncomfortable in it
By Chloe Stillwell
This restaurant's viral anti-vax stance is a sad, predictable sign of our culture wars
By Brandon Yu
Issa Rae, Lil Nas X, and J-Lo just gave us a masterclass in social media
By Keith Nelson Jr.
Stay up to date