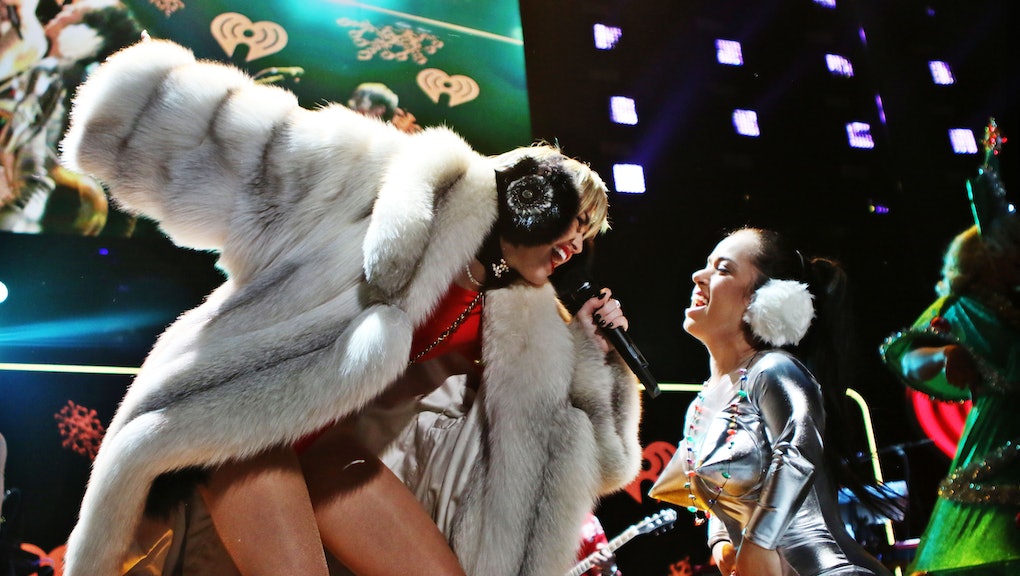 Lourde-y loo. 2013, eh? It's been quite the year. Hopefully you all managed to keep up with Egypt, Syria, Snowden's assorted hangouts, Nelson Mandela's memorial service, the swelling stomachs of Kate and Kim, the affordable care act, and Ted Cruz being a twerp. Before we enter 2014, here's a list of the cultural conversations that dominated the past year of our lives.

I'll say it: I love Solange Knowles and sometimes I love her more than Beyoncé. In 2013, True was finally, officially released after being in the ether through the later months of 2012. And just like that, Beyoncé-for-hipsters was born. Don't get me wrong, Queen Bey is still the go-to artist if you had to choose one diva to dance to for the rest of your life. But Solange's musical catalogue is very quickly shaping up to be strong competition. It's not a house party until I've forced everybody to hear "Losing You" at least 15 times.

2. Will Miley ever sing something decent?

I don't want to have to mention her name again because, like the class clown, her behavior only gets worse when we pay attention to it. But Miley Cyrus's name has been all over the internet this year due to her suspiciously well-marketed combination of shameful choreography, impressive vocal pipes, and increasingly great sartorial choices. Like some cocktail of the Olsen twins and Gwen Stefani, Miley's 2014 may either be her big collapse or the moment we see some genuine musical autonomy behind her impressive voice.

3. Is 'The Hunger Games' worth the hype?

I was never majorly sold on The Hunger Games. Is this because Battle Royale was a formative book of my teenage years? Probably. Is this because I refuse to accept the existence of young adult novels other than Harry Potter? Undeniably. But The Hunger Games as films are pretty great: politically driven, well-acted, and well shot, they're also helping to push the careers of the fantastic Jennifer Lawrence and Josh Hutcherson into the stratosphere.

American television keeps getting better and better each year, and I am basing this entirely on the percentage of my newsfeed taken up by talk of shows. This year Breaking Bad came to a rolling boil, Glee continued to be the only broadcast network show with a trans character, and THAT wedding in Game of Thrones became the most traumatic event in TV history. We also saw the transformation of online streaming websites from pure aggregators into sources of genuinely great content of their own. From House of Cards to Orange Is the New Black, we aren't just talking one or two awards here or there for online TV. The way we view new work is about to change massively.

5. Can Kanye West have a nice cool glass of shut the hell up please?

Of the top 10 sentences of 2013, one will undoubtedly be: "I'm sick of talking about Kanye West." But I have to wonder if this is actually just a brilliant new marketing campaign: there's nothing people enjoy talking about more than the people who infuriate them. This would also explain why Anne Hathaway and Gwyneth Paltrow suddenly became hated and nobody told me. Apparently animosity is the new success. Super.

6. How did we live without Pharrell?

Pharrell Williams had plenty of commercial success in the late 90s to early 2000s, producing classic hits like "I'm a Slave 4 U" and "Hot In Herre". This year he had a major return to form. For all it's ethical quandaries, "Blurred Lines" has got me on top of more bars and under more tables than any other four minute segment of noise that came before it. "Get Lucky" also nailed it this summer. And although overplayed when it first came out, it has made a far gentler renaissance this winter.

7. Can we accept bisexuality already?

Bisexuality is real. In other news, water is wet.

When Tom Daley came out, the press leapt on the "gay" label like drunk people on a pizza place. But not that many heard the fact that he said he still liked women as well. Bisexuality, once again, was thrust aside as some sort of Yeti sexuality that nobody thinks is actually real, no matter how many people say they've seen it.

8. Where have all the lesbians been hiding?

A GLAAD report this year shows that there's been a 10% increase in the amount of lesbian and female bisexual characters on broadcast television. Lesbians have become a majorly hot topic in popular culture. Shows like Orange Is the New Black have helped to humanize the sexualities that don't get the same cultural representation as that of rich, camp, and/or white gay men.

Although Blue Is the Warmest Color brought us a movie with lesbian principals (and the New York stage adapted Fun Home to glowing reviews) the French movie may have had more than a few problems considering how unhappy the leads were with the process.

9. Cronut Vs. Ramen Burger Vs. The World

2013 gave birth to the cronut, the ramen burger, the Dorito taco, and just about every other crazy food mutt you can imagine. And the ones that already existed got an extra dose of love because everyone wanted to complain about this "hipster food" trend (which doesn’t even make sense, are people just using hipster like it's supercalifragilisticexpialidocious now?).

10. Where is Disney hiding all the cocaine?

If ever there was a zenith of the "young stars collapsing in on themselves" trend, 2013 was it. With the death of Corey Monteith, the mental health problems of Amanda Bynes, the admittance by both Zac Efron and Demi Lovato of drug use, and, of course, the big Miley in the room, this year saw many young stars fall from grace. First thing's first, we need to find who at Disney is clearly hooking all of it's 21st century stars on coke. Second, we need to really nip this in the bud — it's almost as if this is some sort of bizarre social experiment where we're just ruining people's lives for the fun of saying "I told you so" a few years later.

This year marks, according to the Guardian, the start of a new wave of feminism. It's been a year of women repeatedly pointing out that men aren't respecting them in the ways that they should be, and proving over and over again that they deserve to be heard more than they currently are. Yet for every Katniss Everdeen, we also saw a "Blurred Lines." It seems that for every step forward, society loves to take two steps back.

Let's hope that 2014 continues to show that there is nothing more important than having an equal platform for all people, and that nobody does something insanely sexist like designing a bra to stop crazy, hysterical ladies from getting fat ... Oh. Oh, hang on.

12. If you're kooky, can you get away with anything?

If you're Anna Kendrick, Maisie Williams, or the ex-head of Sweden's Left Party, you can get away with just about everything because hell, you're just genuine and kooky. I don't know how this is determined — maybe by offering a blood sacrifice to Jennifer Lawrence, the queen of public displays of humanity.

But while these lucky few can literally do anything and it just be considered "charming," others have completely fallen out of favor. Sweden's leadership can flash some scrote but Anthony Weiner, Rob Ford, and even Obama’s potentially tactless selfie have shown that when it's on purpose, we won't put up with silly mistakes from people in power.

13. Is the Pope more than just a bloke in a smock?

Remember when the new Pope took office and everyone was all, "Ohhhh that Pope, he's never going to change," and we went on with our lives?

Well. Guess. What. He went and changed bloody everything didn't he! Well, not everything. But, if ever a man has deserved to be TIME's person of the year, it's this guy. While other men positions of power were showing that their economy was bigger than yours, Pope Francis was saying that gay people shouldn't be that big an issue and was all up in cleric's grills over child sex abuse allegations.

Admittedly, female priests still get a cold shoulder, and he also suggested people would get fast-tracked to heaven if they tweeted about World Youth Day, but don't we all get a bit overexcited when we first join the information super highway?