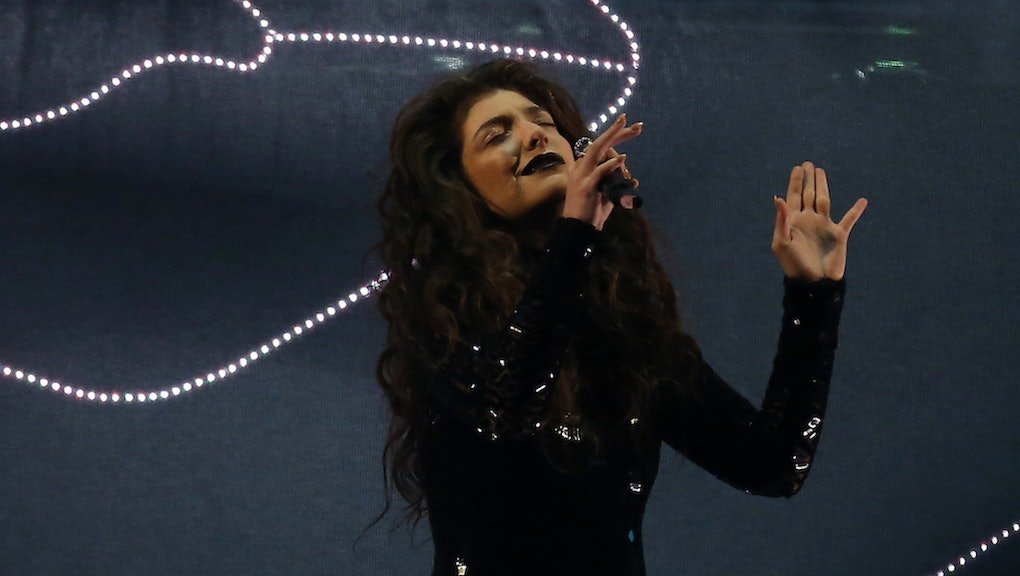 Lorde has once again shown herself to be a completely awesome feminist crusader.

When the young singer spotted a heavily-airbrushed picture of herself floating around the Internet, she decided to take a stand for natural beauty by tweeting an unedited shot alongside it. Turns out she — horror of horrors — has zits like any other 17 year old.

This is great. Age truthers be damned, Lorde is still very much a teenager. And given that 80% of people have an outbreak between ages 11 and 30, not having flawless skin at her age is totally normal (really, it's normal at any age). Zits happen, and Lorde knows there's no reason to pretend they don't.

She's the rare star whose music and public image are perfectly aligned. Just as "Royals" rejects consumer excess, so too does she resist big corporate media with her tweet. This isn't the first time the singer has shared a more natural photo of herself with the world, either:

The worst of it, though, is that Lorde's skin honestly still looks pretty clear in the second shot. The pressure on stars, especially female stars, to conform with utterly unrealistic beauty standards is immense, and no one — let alone a 17-year-old girl — should be faced with it. It's inspiring to have a young woman in the spotlight who seems so completely comfortable in her skin, and Lorde's confidence makes her a genuine role model for young fans who are surely struggling with their own self-esteem issues.

But if the recent influx of viral exposes railing against the use of photoshop are any indication, young people in general are no longer content to simply sit by as the media tells them that beauty comes from airbrushing away any and every supposed flaw. From outrage over Target's absurd thigh-gap fail to American Eagle's decision to use un-airbrushed models, our discontent is being heard. Let's hope more awesome celebrities take after Lorde and join the conversation.