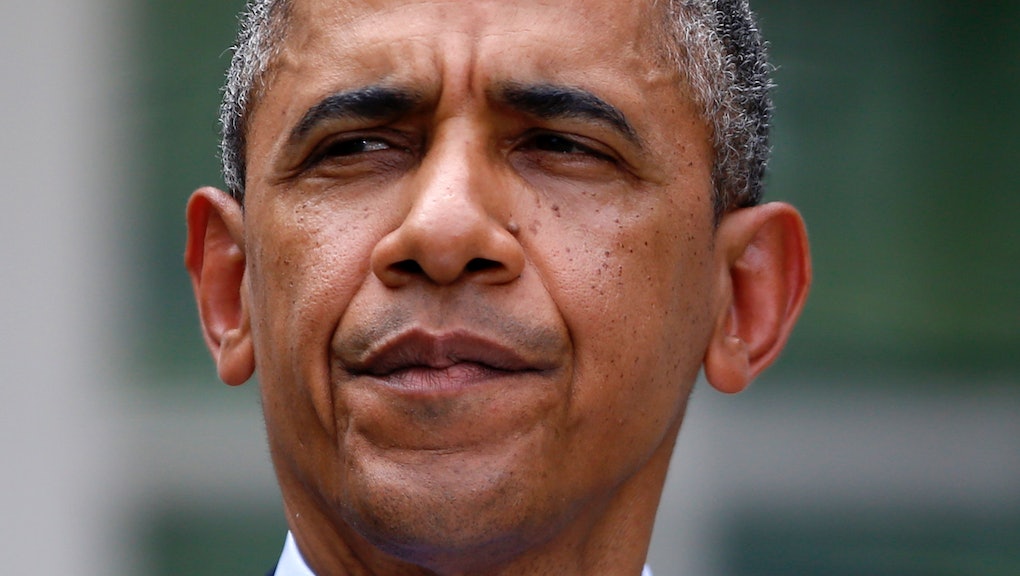 President Obama Has a Scathing Message for Congress on Immigration Reform

"If Congress will not do their job, at least we can do ours," President Barack Obama said outside the White House on Monday when he slammed House Republicans for their inability to pass "a darn bill."

At the press conference in the Rose Garden, Obama said that Homeland Security Secretary Jeh Johnson and Attorney General Eric Holder will identify "additional actions my administration can take within my existing legal authorities, to do what Congress refuses to do and fix as much of our immigration system as we can."

In 2012, Obama halted the deportation of some undocumented children. He has also indicated that he wants to send additional resources to the border region to increase security and process undocumented immigrants more efficiently.

The political cat fight: The president's Monday speech comes a week after House Speaker John Boehner (R-Ohio) told him that the House will not hold an immigration vote this year. During his speech, Obama squarely blamed House Republicans for their inability to pass last year's Senate bill. "They're unwilling to stand up to the Tea Party and do what's right for the country. And what's worse — a bunch of them know better," he said.

As to be expected, Republicans are not taking too kindly to this approach. "It is sad and disappointing that — faced with this challenge — President Obama won't work with us, but is instead intent on going it alone with executive orders that can't and won't fix these problems," Boehner said in a statement after Obama's announcement.

But it's more than just words: Boehner announced last week that he will sue Obama for overusing executive actions, giving himself "king-like authority" — despite the fact that when you look at the per day average, Obama has issued the fewest executive actions of any U.S. president in the past century:

Obama is on an executive kick right now. During his State of the Union address this year, Obama promised a "year of action," with or without congressional backing, and so far, he has been delivering. After unilaterally easing student loans, capping carbon emissions, strengthening federal background checks for gun purchases and increasing minimum wage for federal workers to $10.10 an hour, the president has finally turned his attention to immigration.

However, the one thing that lawmakers across the aisle have been able to agree on is the likelihood that bipartisan immigration reform is dead until Obama leaves office. And it seems that the president has given up on any kind of legislative compromise: If Congress won't play ball, he's just going to do it himself.