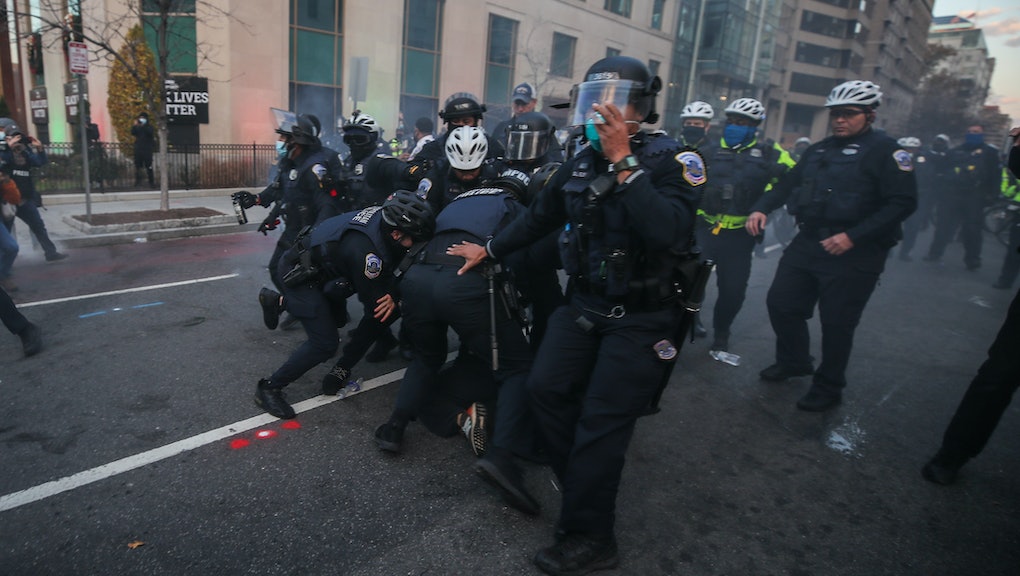 This summer's uprisings defined a year of activism and movement work. Months of persistent and community-driven protests and direct action responded to the police killings of Breonna Taylor and George Floyd and spurred national debate and congressional action around policing, Immigrations and Customs Enforcement, and militarism. As a result, a number of political terms and ideologies that had previously been considered too radical have broken into establishment political discourse this year.

But now, it's finally been accepted on a widespread scale. Here's Mic's round-up of radical, progressive, or marginalized terms and ideas that shaped political conversation this year.

According to Critical Resistance, abolition is a "political vision with the goal of eliminating imprisonment, policing, and surveillance and creating lasting alternatives to punishment and imprisonment." Abolitionist thinking calls for the dismantling of harmful systems of control and replacing those systems with imaginative and healthy systems that celebrate inherent humanness.

Some communities, like Minneapolis, lobbied to abolish police departments. Black-led grassroots organizations have pushed for years to hold the department accountable after a series of violent or racist incidents, and national attention spurred the city council to address those calls.

Other communities abolished forms of imprisonment. St. Louis closed The Workhouse, a "hellish" jail where the majority of people were incarcerated simply because they couldn't afford to post bail. This victory, too, resulted from years of organizing and coalition-building.

The U.S. has multiple monuments to its racist past — and its racist present. This year's uprisings offered renewed energy to calls to dismantle and tear down statues of Confederate officials and famous racists across the country and even in the halls of Congress. Monuments, organizers argue, signal pride in these histories; if the U.S. wants to address the racism baked into its society, then it has to part with the imagery and symbols of these racist origins.

Just last week, a statue of Robert E. Lee, the Confederate general who led a movement against humanizing and freeing enslaved African and Black people, was removed from Capitol Hill. Across California, meanwhile, people spray painted and wrote on statues of Junipero Serra, a Catholic priest who led the colonization of the state and terrorized Native and Indigenous peoples. And Columbus, Ohio, a city named for Christopher Columbus, has multiple monuments to the man who first colonized the U.S. and killed and enslaved Native Americans to do so. Columbus State Community College committed to removing a monument to the man after it was covered with paint.

This year also saw a debate over not just what we want our local and national political futures to look like, but how we want to get there. One of the central debates regarded reform versus abolition. For example, abolitionists argue that police departments can't be reformed into not killing Black people with impunity, especially because contemporary policing is a direct descendent of the country's first use of policing: slave patrols.

Those who favor reform, like the leaders of Berkeley, California, argue that we can curb rates of police violence with a more marginal approach. The city will try to reroute some police funds to an unarmed team that will respond to some calls, like traffic violations.

Realistically, all politics is a game of slow-bore reform — but whether the process itself should be the endgoal is something that organizers question. As Mic wrote in June, "Reforms like requiring body and dashboard cameras would require putting more money into police, and they haven't been consistently effective. In many cases, officers simply decline to turn on their body cameras, and similar to banning chokeholds, putting cameras on police doesn't stop them from killing people even when the cameras are running."

The federal government's late, negligent, and pathetic response to the coronavirus pandemic forced people to take matters into their own hands. Instead of waiting for $1,200 checks to arrive (and now, $600 checks), people took to social media to circulate their own funds and create mutual aid networks to support local food pantries, shelters, and restaurants.

Mutual aid networks have been around since, well, forever. As Maya Adereth explained in a piece for Jacobin, there is a long history in the U.S. of people of color organizing with and supporting each other economically, often as a result of the federal government's refusal to provide substantive support.

As Teen Vogue's Lucy Diavolo wrote, "Mutual aid is basically a fancy term for helping each other." But as the government's response to the pandemic forced millions of people into economically precarious situations, more people started helping each other, and these intertwining networks have saved countless jobs, homes, and livelihoods this year.

No one actually likes it and it doesn't have the most accurate track record. That's right: We're talking about the Electoral College. In this heated election year, we saw a renewed call to get rid of the institution and ensure that a national popular vote determines the president.

There have been nearly 1,000 congressional resolutions to change or get rid of the Electoral College altogether, largely because it's not best way to elect a president. This was felt most recently in 2016, when Democratic candidate Hillary Clinton lost the Electoral College but won the popular vote by 3 million votes. Fearing that lightning might strike twice in 2020, political parties and PACs put money and labor into just a few states: Pennsylvania, Georgia, Florida, and Michigan. President Trump won these states in 2016, and given the way the Electoral College math shook out, they were critical to winning this year.

But many argue that a presidential race shouldn't come down to Electoral College math, which prioritizes the votes in a few smaller states over every individual's will. Instead, they say, it should come down to the simple math of whoever wins the most votes. As Rachael Cobb, chair and associate professor of government at Suffolk University in Massachusetts, told Mic, the Electoral College makes it "essentially as if ... the political interests of the majority of people are irrelevant."

Restorative justice is framework and practice that centers community-building, restoration, and accountability rather than carceral methods of justice. Everyone from community organizations to some municipal courts have begun to implement restorative justice practices after learning what Black and Indigenous-led groups and communities have known for generations: that locking someone up does not heal impacted communities or change the circumstances of criminality.

Restorative justice allows people who have been harmed to come to the table with those who have done the harming, and co-create a path forward. As Rep. Sheila Jackson Lee (D-Texas) wrote in a blog post for the American Civil Liberties Union outlining why we need to pass a reparations bill in Congress: "With the rise and normalization of white supremacist expression during the Trump administration ... the concept of restorative justice [has] gained more urgency, garnering the attention of mainstream commentators and illustrating the need for a national reckoning."

More like this
The Chauvin trial is incapable of delivering real justice
By Vanessa Taylor
What is court packing, and why are Democrats suddenly so into the idea?
By Ray Levy Uyeda
Why grand jury proceedings are so secretive
By Vanessa Taylor
Stay up to date