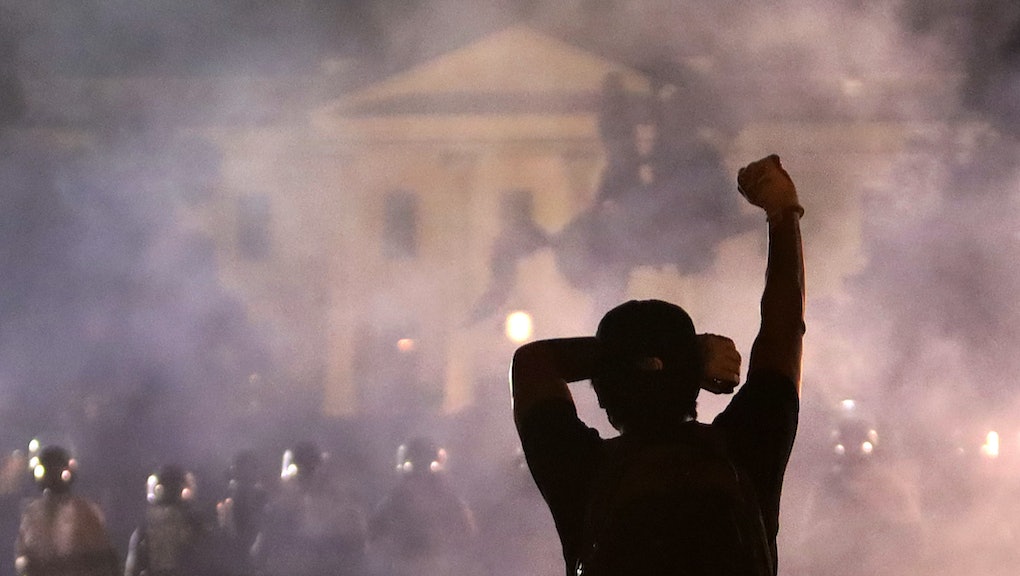 America is on fire and Trump is nowhere to be found

Historically, presidents have addressed the nation in moments of reckoning. But as the country begins its second week of protests of police brutality against Black Americans sparked by the murder of George Floyd in Minneapolis, President Trump has been quiet — except on Twitter.

Last Monday, a white police officer killed the 46-year-old Floyd, kneeling on his neck for nearly nine minutes, even after he apparently lost consciousness. Floyd, a Black man, was unarmed and handcuffed during the incident. A video of the police killing went viral the following morning, sparking nationwide protests to bring charges against the arresting officer, Derek Chauvin and the three other officers at the scene who watched as Chauvin suffocated Floyd and ignored his cries of "I cannot breathe."

As Minneapolis reeled from Floyd's murder last week, with protesters taking to the streets to speak in what Martin Luther King Jr. called the "language of the unheard," Trump advocated for militarizing local police departments and shooting protesters, tweeting, "When the looting starts, the shooting starts."

Though Trump once claimed that he as president has "total authority" over the country, time and time again he's declined to lead the nation. When he claimed "total authority," he was referring to managing the coronavirus pandemic, but his statement was debunked in real-time as states began sourcing their own personal protective equipment and digging into their own rainy-day funds to support unemployment claims in the absence of federal leadership.

That same pattern is what we're seeing from Trump again now: claims of leadership, with little actual leadership.

It's becoming clear that mayors and governors are navigating the protests on the local level, while Trump throws stones via the White House WiFi. Trump has used Twitter to lay blame on Minneapolis Mayor Jacob Frey (D), as well as other Democratic local and state leaders whom he believes have mishandled the protests, singling out Frey for a "total lack of leadership."

While it's true that the local powers that be were conspicuously absent in Minnesota last week, Trump hasn't done any visible leading either. As protests continued through the weekend, demonstrations taking place outside the White House worried the Secret Service so much that officials brought Trump to the underground presidential bunker at 1600 Pennsylvania Ave. for about an hour Friday night. It wasn't clear what exactly necessitated this response or why the Secret Service felt that it was safe for the president to emerge after an hour's time.

But after a night that had him "rattled," as the Associated Press put it, by the size of the protests, Trump's big presidential message was about the apparent lethality of the Secret Service's resources. Protesters would've "been greeted with the most vicious dogs, and most ominous weapons, I have ever seen," he wrote, while citizens rose up against brutality by law enforcement. "That’s when people would have been really badly hurt."

On Saturday, Trump traveled to Florida to watch the launch of the Space X Dragon capsule, which proved to be a stark display of the different Americas that will be recorded in history. Some photos from this weekend will show the executive branch's leaders celebrating the a rocket launch, and others will show cities literally burning. During his address to the crowd that gathered to watch the launch, Trump mentioned Floyd's death and called for further police action to stop the protests.

As Trump and Vice President Mike Pence watched American astronauts head into space, protests continued Saturday, with police dressed in full riot gear facing off against protesters, many of whom donned masks to protect against coronavirus — and police-administered pepper spray. While Trump continuously disparaged protesters as "violent" or "thugs," he said nothing about the countless videos that surfaced of police aggression, with officers in vans running through crowds in New York City, spraying journalists in the face with pepper spray, or breaking into a car in Atlanta to Taser the people inside.

On Sunday, with demonstrations tearing through the nation's capital, the White House "went dark," with all of the building's outside lighting turned off. Observers noted the austere visual was a dramatic contrast to the protests and fires that raged outside the White House gates and literally lit up the city. According to The New York Times, national advisers recommended to Trump that day that he make an address to the country, but as of Monday afternoon he's still yet to do so.

Instead, Trump told the nation's governors in a private call Monday morning that they should "dominate" protesters. According to audio obtained by Vice, Trump told state leaders, "If you don’t dominate, you’re wasting your time. They’re going to run over you, you’re going to look like a bunch of jerks. You have to dominate." On the call, per Vice, he also advocated for arresting, detaining, and "tracking" protesters as a way to control the "movement."

About 40 cities so far have instituted curfews to quell unrest, and some state leaders have called in the National Guard to patrol the streets and uphold curfews. One Minneapolis resident filmed as National Guard soldiers marched down her streets yelling "Light 'em up!" and then shot paint canisters at members of her household who were merely standing on the porch.

Trump's Justice Department — which has been skeptical of civil rights — has vowed to investigate Floyd's case. But if Trump decides to address the country, it's unlikely that his words will be the balm American so desperately needs. The president has often refused to take responsibility for the death of his citizens, and he's continually praised police even in the face of overwhelming evidence of police violence. He stood forcefully alongside protesters who opposed the stay-at-home orders designed to mitigate the spread of coronavirus, the majority of whom were white conservatives, but has been utterly absent in recognizing the real anger, frustration, and pain that Black Americans and their supporters are expressing now. If and when Trump does speak on the issue, the odds seem long that he will be able to show he understands the country he leads right now — that this not just about one man, or one death, but rather about confronting a system of entrenched inequality.