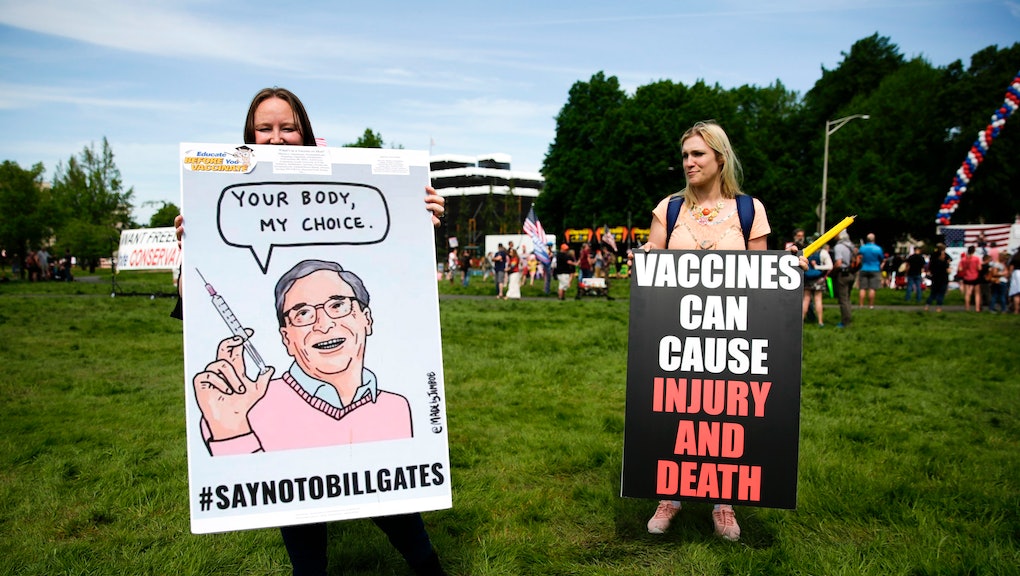 Anti-vaxxers have finally incurred the wrath of the celebs

At the beginning of the pandemic, we were scared. Then we got lonely, weathering a long, dark, diseased winter. Humanity got a shot of hope in the spring, with the turbo-charged rollout of a life-saving vaccine that's very good at protecting people from coronavirus. But largely thanks to the "pan-dummies" who think Dr. Anthony Fauci is trying to inject them with microchips, Covid-19 is inexplicably worse now than it was a year ago. As maskless, unvaccinated hoards of people keep sharing air and passing the virus around, it'll keep mutating and getting better at evading our antibodies.

There's only one logical way for people who believe in science to feel about all this: angry. Vaccinated folks are wearing masks again and still coming down with the virus — though at least they're not winding up in the ICU. It's largely the unvaccinated who are being hospitalized and dying from COVID-19 these days. Another reason to be mad at anti-vaxxers: they're making it really difficult for doctors to adequately care for other sick patients.

Anyhow, celebrities are starting to get very vocal about their rage towards people who still refuse to get the vaccine. During his first monologue back from a months-long hiatus, Jimmy Kimmel said unvaccinated Covid patients don't deserve ICU beds. "Vaccinated person having a heart attack? Yes, come right on in, we'll take care of you. Unvaccinated guy who gobbled horse goo? Rest in peace, wheezy," the late-night host joked, to cheers from his audience.

Howard Stern, the king of putting things bluntly, literally said screw 'em on his radio show this week. "When are we gonna stop putting up with the idiots in this country. Fuck 'em, fuck their freedom. I wanna be free to live," he ranted. Stern also made the salient point that schools have long required measles, mumps and polio vaccines, so what's the difference? He echoed Kimmel's sentiment about anti-vaxxers clogging up ICU beds. "I'm really of mind to say, 'Look, if you didn't get vaccinated [and] you got Covid, you don't get into a hospital.' Go fuck yourself. You had the cure and you wouldn't take it."

Faced with venues that wouldn't comply with Covid-19 safety precautions, comedian Patton Oswalt decided anti-vaxxers don't deserve nice things. He cancelled four planned shows in Florida and one in Salt Lake City, since they wouldn't mandate proof of vaccination or a negative Covid-19 test to attend. "My ego is not big enough to think that people should die to hear my stupid comedy," he told fans on Instagram. "So hopefully, hopefully, in the future we can rebook those when sanity holds sway again."

They're hardly the only famous folks to rage against the unvaccinated. Arnold Schwarzenegger nearly lost his temper while talking to CNN about "schmucks" who don't care about protecting others. "There is a virus here. It kills people, and the only way we prevent it is get vaccinated, get masks, do social distancing, washing your hands all the time, and not just to think about 'Well, my freedom is being kind of disturbed here.' No, screw your freedom," the actor and former governor of California said.

Friends star Jennifer Aniston went so far as to cut off friends who wouldn't get the shot. "I've just lost a few people in my weekly routine who have refused or did not disclose [whether or not they had been vaccinated], and it was unfortunate," she told InStyle. "There's still a large group of people who are anti-vaxxers or just don't listen to the facts. It's a real shame."

In a way, it's nice to see stars getting as pissed off as the rest of us are who followed the rules. There's the small chance some fans will listen to them and finally get the jab. But their wrath also validates the rage we're feeling on a daily basis. As psychotherapist and certified coach Tess Brigham told Mic recently, everyone is reeling. "This is the first time that what people who are nameless and faceless are doing is impacting us and how we move forward. That’s really difficult and really scary," she said. Anger is a pretty natural response, she noted, and probably part of the pandemic grieving we'll all have to grapple with at some point.

More like this
After shutting up for a minute, celebrities want everyone to listen to them again
By Brandon Yu
The moral of Nicki Minaj and the Tale of the Giant Balls? We need to explain vaccines better
By Kara Weisenstein
Nicki Minaj's cursed vaccine tweets show celeb transparency is a slippery slope
By Keith Nelson Jr.
Stay up to date