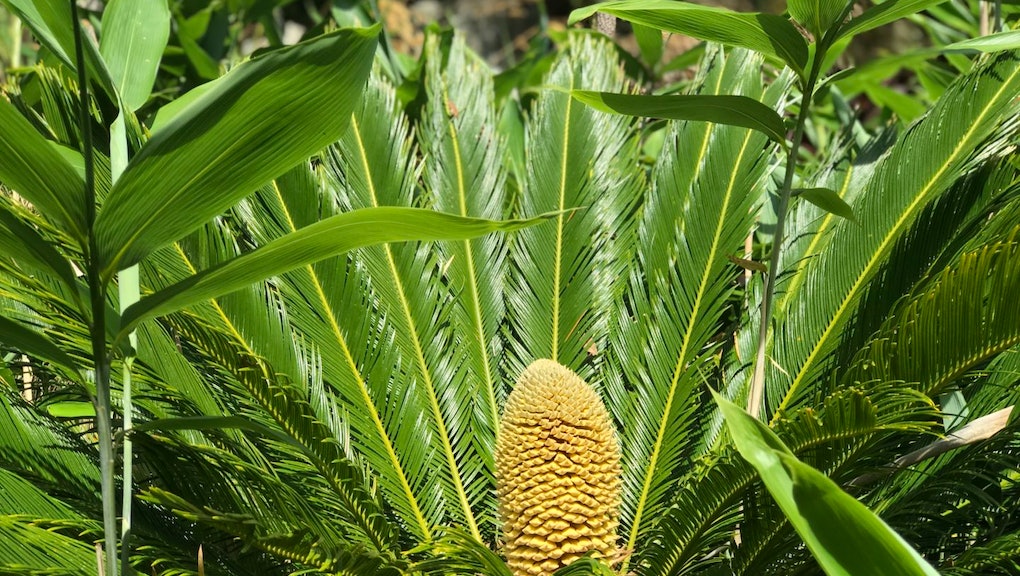 A botanical garden in the U.K. has announced that their experiment growing prehistoric plants have finally developed male and female cones that will allow them to create seeds. But the botanists aren't treating it like unequivocally good news. They believe climate change is what's caused the plant's comeback, and that it could indicate how rising temperatures can quickly change an environment.

According to Berkley's UC Museum of Paleontology, these plants, known as Cycads, once flourished on the Earth nearly 300 million years ago. During the Triassic and Jurassic periods, cycads thrived in the tropical environment alongside the dinosaurs. Fossils found all over the world — from Alaska to Antarctica — indicate that they made up approximately 20 percent of all plants at the time. Nowadays, cycads only grow in tropical or subtropical areas of the world. A country like Great Britain isn't typically the ideal environment for these plants.

However, Ventnor Botanical Garden, located on the Isle of Wight, is in a unique spot that allows temperate and subtropical plants to grow. The plants are cultivated outside, where they manage pretty well thanks to the warmer temperature in the area. One day, about 15-20 years ago, the gardeners at the Garden decided to experiment with raising prehistoric cycads (Cycas revoluta). The experiment has been an overall success; the ancient plants have grown healthy leaves and survived cold seasons despite being outdoors. But the cycads never produced any cones since the environment was not quite warm enough for them. As temperatures rose each year, one of the plants finally produced a male cone just five years ago — but the botanists were unable to do anything with the bachelor plant, since they needed both male and female cones to make seeds.

This month, the Garden has announced the growth of two plants with cones — one male and one female. With the help of botanists, these plants will be able to pollinate each other and create seeds. The curator at Ventnor Botanical Garden, Chris Kidd, told CNN that this event is the "first time that cycads have produced male and female cones in the British Isles since 60 million years ago."

But it's something that could only happen because of global warming. "This can be seen as further evidence from the plant kingdom of climate change in action," he explained. "Certainly this sort of plant could formerly not be considered hardy in the U.K.; the recent heatwave has contributed to the individual cone growth."

According to Kidd, these plants don't usually produce cones outdoors because of the cooler weather. To him and the botanists of the Garden, the appearance of the cones are both an exciting and a worrying indicator of what the global scale of climate change can mean for everyone in the world.

"This could be seen as exciting for British gardeners but if you can see the climate changing so dramatically in such a short range of time," he said to CNN, "it's very minor when you consider what could be happening elsewhere in wider agriculture, horticulture, and socially, for geo populations on the planet."

Other studies conducted by researchers have indicated that rapid climate change could drastically alter life as we know it. Increasing temperatures can threaten existing farmlands, melt enough ice to cause flooding to coastal communities, create a dire health risk to elderly and children, and spur human migration to nations with more work opportunities as farmlands dry up. The growth of tropical plants in atypical areas is just a small example of how environments all over the world could change. Humans may soon have no choice but change with it, as well.