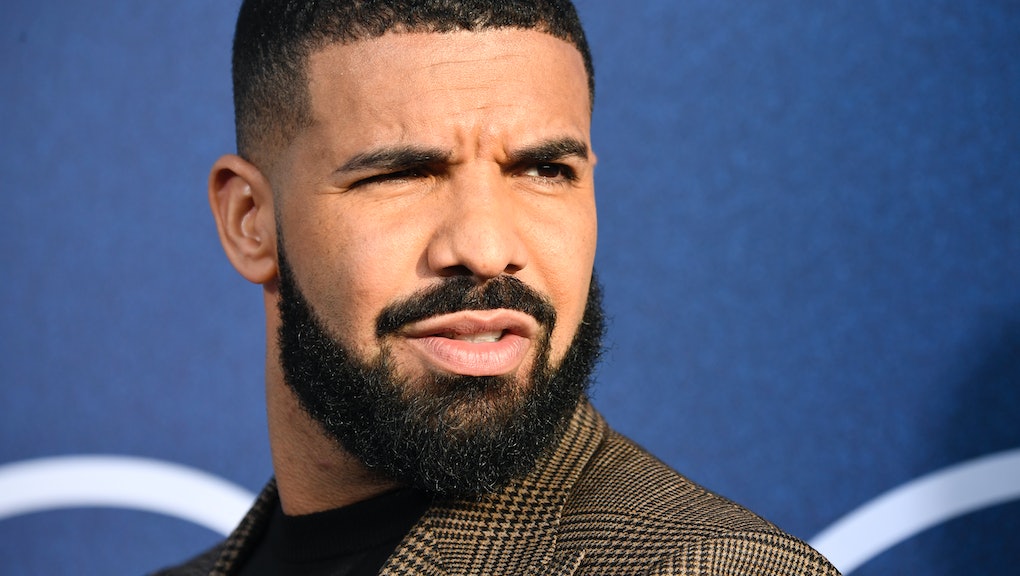 Drake sure seems lonely in his $100 million mega-mansion

Poor Drake. It must be really hard hunkering down in your $100 million mansion during a pandemic. How could he possibly divert himself? Perhaps by shooting some hoops on his “NBA regulation-size indoor basketball court crowned by a 21-square-foot pyramidal skylight” or doing a few laps in his “indoor swimming pool sheathed in black granite.”

If athletics don’t sound appealing, Drake could noodle around on the “bespoke concert grand piano by the venerable Austrian piano maker Bösendorfer designed in collaboration with Japanese artist Takashi Murakami.” If he likes what he plays, the 33-year-old millionaire can mosey on over to his in-house world-class recording studio, which Drake described as “eccentric 1970s studios mixed with Annabel’s in London.” Two massive amethyst crystals frame a paisley couch in the booth. An entire wall in the studio lounge is made of backlit brown agate semi-precious stones.

And we have not even scratched the surface of how opulent, how over-the-top Drake’s house is. The Architectural Digest feature on his massive new abode reads like a fancy, moneyed word salad. Drake’s architect, Ferris Rafauli, bedazzled the property with high-priced finishes. Everything’s covered in marble, antique mirror and bronze.

Rafauli crafted chandeliers for the mansion modeled on the iconic starburst fixtures at the Metropolitan Opera in New York. The biggest light, in Drake’s living room, has more than 20,000 pieces of hand-cut Swarovski crystal and is the second-largest installation of its kind in the world. The architect also designed Drake’s bed, which weighs a literal ton and evidently cost more than many folks’ entire homes. Its antique mirror and tufted leather headboard has a whiskey-and-champagne bar embedded in the reverse side, and the bedding features a tapestry by Alexander McQueen.

“The bedroom is where I come to decompress from the world at the end of the night and where I open my eyes to seize the day,” Drake told AD. “The bed lets you float, the shower lets you escape and gather your thoughts, and the closet makes you want to talk to yourself while you’re getting dressed.” Well, sir, if I had a 3,200-square-foot master-bedroom suite to romp through on a nightly basis, I’d be a happy human, too.

The rollout of Drake’s… palace could not come at a worse time, though. People are losing their jobs in record numbers; many don’t know if they’ll make rent in the coming months. And the Toronto rapper is choosing the middle of a pandemic as an apt moment to flaunt his wealth.

Look, Drake has never purported to be a man of the people. His whole brand is escapism and fantasy rap. “It’s a vibe,” as they say. Like Kanye West presiding over his $15 million ranch in Wyoming, Drake built himself a temple so he could live like a god.

Back in the “before time” when nobody knew the word “coronavirus,” a lot of people were into this rich guy schtick. There’s a reason MTV Cribs was a phenomenon. But with loads of people out of work, stuck inside their less luxurious accommodations, now is not the time to be flaunting how out of touch you are.

But being in touch with reality and in touch with what’s trendy are two entirely different things. Drake may be (successfully) conquering TikTok. But he’s dense if he thinks people are happy to get a glimpse inside his comfy kingdom in these trying times.

More like this
Steve from 'Blue's Clues' gave us the closure we didn't know we needed
By Kara Weisenstein
Lil Nas X's 'baby registry' proves trolling can be done with heart
By Brandon Yu
The 8 best reality shows you're not watching, but should be
By Brandon Yu
Stay up to date