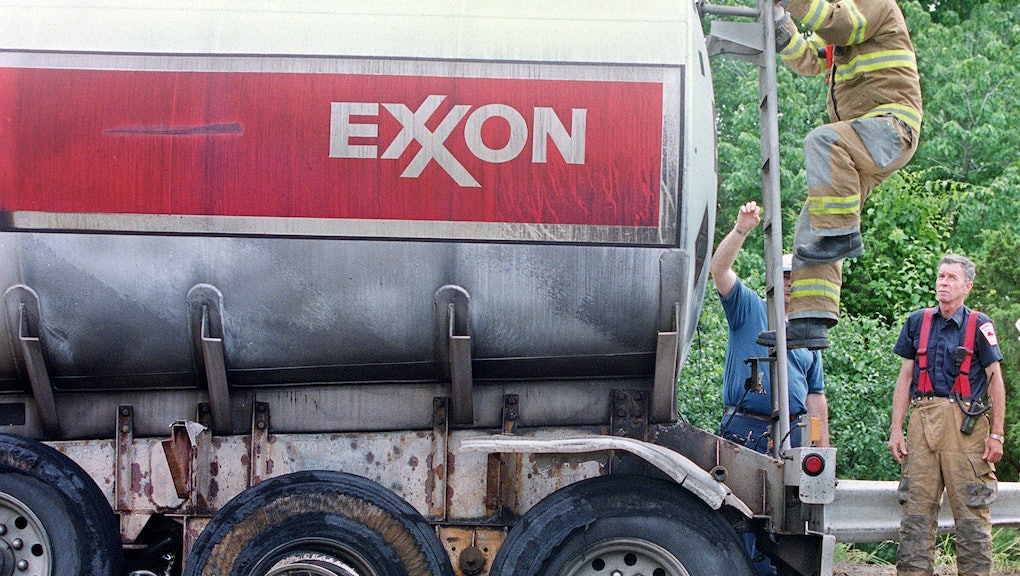 Exxon lobbyist tells the truth, is sorry you heard it

ExxonMobil has been saying all the right things when it comes to climate change, a global crisis that the international oil firm played an outsized role in creating, by promising to reduce its emissions and fall in line with the Paris Climate Agreement. But behind closed doors, the company seems to still be committed to its own bottom line, rather than to the planet. In a video call with undercover activists from the environmental advocacy organization Greenpeace, a senior lobbyist for ExxonMobil accidentally gave away the game, admitting that the company opposes action to address the climate crisis and uses "shadow groups" in an attempt to muddy the science and create doubt about the reality of climate change.

Keith McCoy, a senior director of federal relations at ExxonMobil, and Dan Easley, a former chief lobbyist for the company, serve as the voice of ExxonMobil during the call — though the company now says that two men "in no way represent the company's position," according to The New York Times. The two unwittingly hopped on a video call with Greenpeace, under the impression that they were speaking with recruitment consultants looking to hire lobbyists for a major client. Instead, they spilled to the environmental org about Exxon's corporate strategy, revealing what the company apparently really thinks about climate efforts.

It turns out, Exxon doesn't seem to take climate change all that seriously. "Did we aggressively fight against some of the science? Yes," McCoy says on the call, which was published by Greenpeace investigative outlet Unearthed. "Did we hide our science? Absolutely not. Did we join some of these shadow groups to work against some of the early efforts? Yes, that's true.”

McCoy seems to be referencing Exxon's history of covering up early evidence of climate change discovered by company scientists in the 1970s. That history was covered extensively by Inside Climate News, which found that the oil firm knew that climate change was happening and actively hid that fact from the public. A peer-reviewed study published by Harvard University in 2017 also concluded that Exxon misled the public on climate change, though Exxon contends that all of these studies were "bought and paid for" by activist groups — and that's not from a secret tape, that's the company's public position.

As for those so-called "shadow groups," it's not clear exactly which ones McCoy is referencing. There are just so many to choose from! Exxon has given millions of dollars over the years to conservative think tanks and other groups that turn around and push pro-Big Oil policies. According to a 2015 paper published in the journal American Behavioral Scientist, as much as 90% of all research papers that question or deny the reality of human-caused climate change come from right-wing think tanks like the ones that Exxon pours money into. But, to Exxon, that means it's money well spent: "There’s nothing illegal about that," McCoy said of the money. "“We were looking out for our investments. We were looking out for our shareholders."

On the call, McCoy also made it clear that Exxon would do whatever it could to try to stand in the way of the Biden administration as it attempts to pass climate change legislation. "We're playing defense because President Biden is talking about this big infrastructure package and he's going to pay for it by increasing corporate taxes," McCoy said. He also revealed that stripping the ambitious plan of its climate-related spending and sticking to just roads and bridges — much like the bipartisan compromise bill proposed last week — would save Exxon nearly $1 billion in potential taxes.

That appears to be something that Exxon is willing to fight for, though it's not like Exxon doesn't have money to spare. According to Unearthed, Easley laughed when asked if the company scored any policy wins under former President Donald Trump, apparently because there were simply too many to list. "The wins are such that it would be difficult to categorize them all," he said on the undercover recording. Easley also claimed that the Trump tax cut was "probably worth billions to Exxon.”

The call also revealed that even when Exxon publicly takes the side of a policy that would potentially help address climate change, it's likely just for show. For example, Exxon has publicly lent its support to a carbon tax, a fee paid by companies for the carbon emissions they produce through manufacturing. But McCoy revealed the insidious reason for that support: Exxon believes it will never happen.

"Nobody is going to propose a tax on all Americans and the cynical side of me says, 'Yeah, we kind of know that but it gives us a talking point that we can say, well what is ExxonMobil for? Well, we're for a carbon tax,'" McCoy said. According to Unearthed, when asked if ExxonMobil actually thinks that a carbon tax could happen, McCoy said, "No it's not, it's not. Carbon tax is not going to happen."

ExxonMobil has quickly tried to distance itself from these comments, which is a little challenging seeing as they come from two people hired to fight for the company's agenda with lawmakers. In a statement to The New York Times, company CEO Darren Woods said that McCoy and Easley "in no way represent the company's position on a variety of issues, including climate policy." He claimed that the two "were never involved in developing the company's policy positions on the issues discussed," and that his company "condemn[s] the statements and are deeply apologetic for them."

McCoy also issued an apology, though one that certainly feels like he's sorry for getting caught, but not for what he said. In a post on LinkedIn, he unleashed the business person's version of a Notes app screenshot, stating, "I am deeply embarrassed by my comments and that I allowed myself to fall for Greenpeace's deception. My statements clearly do not represent ExxonMobil's positions on important public policy issues."

McCoy went on to apologize to his colleagues and friends in Washington, D.C., which feels a little telling in its own right: He's sorry for making life a little more difficult for the folks he works with, but neither he nor Exxon seem all that sorry about the company's role in contributing to climate change.