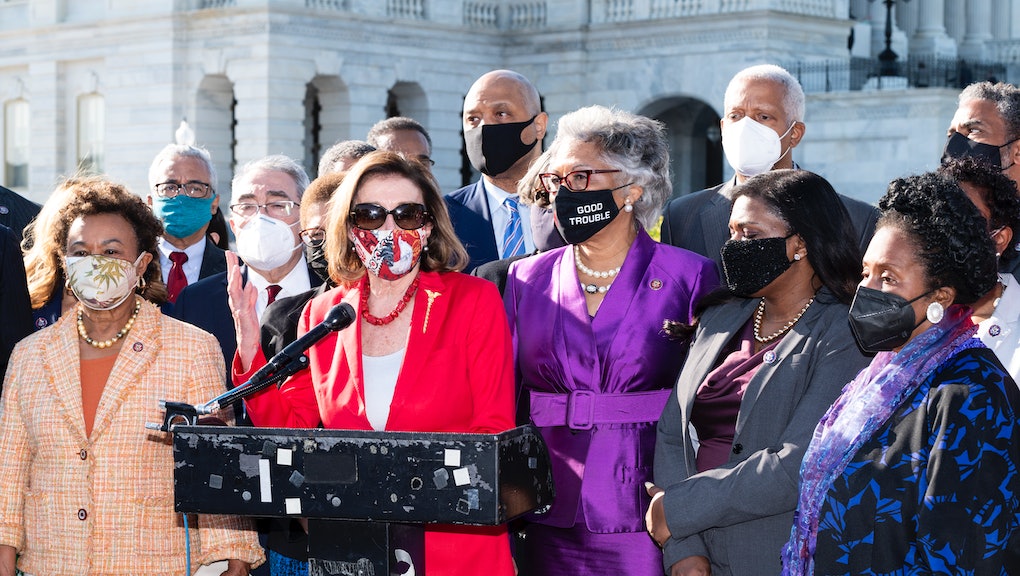 For real justice, it’s not Black people who need to “sacrifice”

Tuesday’s verdict for former police officer Derek Chauvin’s murder of George Floyd wasn’t a victory or cause for celebration –– it was a brief sigh of relief after weeks of dread. The footage from last year’s cell phone video and the testimony in the case were crystal clear, but in a country where there’s such a long history of police being able to escape carceral ramifications from killing civilians, there was still a sense of foreboding that Chauvin’s case would have a similar fate. But that's only part of why a statement from Nancy Pelosi, one of the most powerful politicians in the country, was so jarring.

“Thank you George Floyd for sacrificing your life for justice,” said Pelosi, the Speaker of the House of Representatives, at a press conference with the Congressional Black Caucus. “Because of you and because of thousands, millions of people around the world who came out for justice, your name will always be synonymous for justice.”

Pelosi’s usage of the phrase “sacrificing your life” is thoughtless and irresponsible. Some may just dismiss it as a well-intentioned flub. But to say that George Floyd “sacrificed his life” is dishonest: He didn’t volunteer himself to die for the sake of a worldwide surge of protests against police brutality. He was fighting, and pleading, for his life until the final breath left his body. Of all the victims of police brutality that have been most covered by the news –– Breonna Taylor, Botham Jean, Philando Castille, Alton Sterling, and the endless list of so many others –– none of them “sacrificed” themselves for justice. They desperately wanted, and deserved, to still be living today.

Black people may be victims and survivors of a white supremacist system that equips police officers with guns, military-grade weapons, and qualified immunity. But we aren’t sacrificing anything: We’re fighting for our lives. When Sandra Bland was pulled out of her car for the apparent crime of smoking a cigarette and being upset for being pulled over, she spoke angrily and passionately to the police officer, citing her rights while fighting to defend herself. Tamir Rice was 12 years old, playing with a toy in the park, when police did what was ostensibly a drive-by shooting. And Tuesday night, around the same time the verdict for Derek Chauvin was being delivered, 16-year-old Ohio girl Ma’Khia Bryant was killed by a police officer after she, herself, had reportedly called the police for help.

She wasn’t sacrificing her life; she was depending on the police to save her life, and she got the opposite. These people’s families didn’t sacrifice their loved ones for the movement, either; they’ll be grieving for the rest of their lives. And the people who restlessly spend their time protesting, marching, meeting with elected officials, and organizing, they aren’t sacrificing either; they’re fighting for the lives of themselves and the people they love.

The person we most associate with “sacrificing his life” was Jesus Christ. Followers of Christianity believe that he willingly suffered persecution and ultimately gave his life, through an excruciatingly painful crucifixion, in exchange for God forgiving humans for their sins. But according to this same religious belief, Jesus was resurrected from the dead three days later, walking amongst the people again before ascending into heaven. As much these victims of police brutality will have legacies that are continued by activists who do the work, they don’t have the ability to rise from the dead. Police often act as if unarmed Black men and women are supernatural beings, as if killing us is the only way to stop us. And they shoot or strangle us, often without even offering medical attention afterward, as if we can easily revive ourselves.

Politicians were quick to call Tuesday’s verdict a “victory” and to label it as “accountability,” but they directly benefit from those labels. They want the powerful bloc of Black voters to associate them and their political tenures with the fight for justice against police brutality, so that we’ll feel protected by putting them in office. But it’ll take more than one or two guilty verdicts to be on the right side of history. Police need to know ahead of time that angry protesters and civil payouts won’t be the only repercussions if they take a life unjustifiably, or stand by as their partners do so; they should credibly fear losing their badge and their freedom. And while the infamous “blue wall of silence” was breached for this case as officers testified against Chauvin, there's still a long way to go before this is changed systemically. This case doesn't leave substantial reason to believe that Black people are immensely safer from police violence than we were the minute before the verdict was delivered.

Nancy Pelosi spoke of “sacrifice for justice.” But the real sacrifice needs to be done by her fellow politicians, law enforcement organizations, and judges. To sacrifice, you have to willingly give something up on behalf of something else. And these people must be ready to sacrifice the benefits of white supremacy to destroy its evil. They have to be willing to give up hundreds of years of advantages they have as white people, all in the pursuit of what’s right.