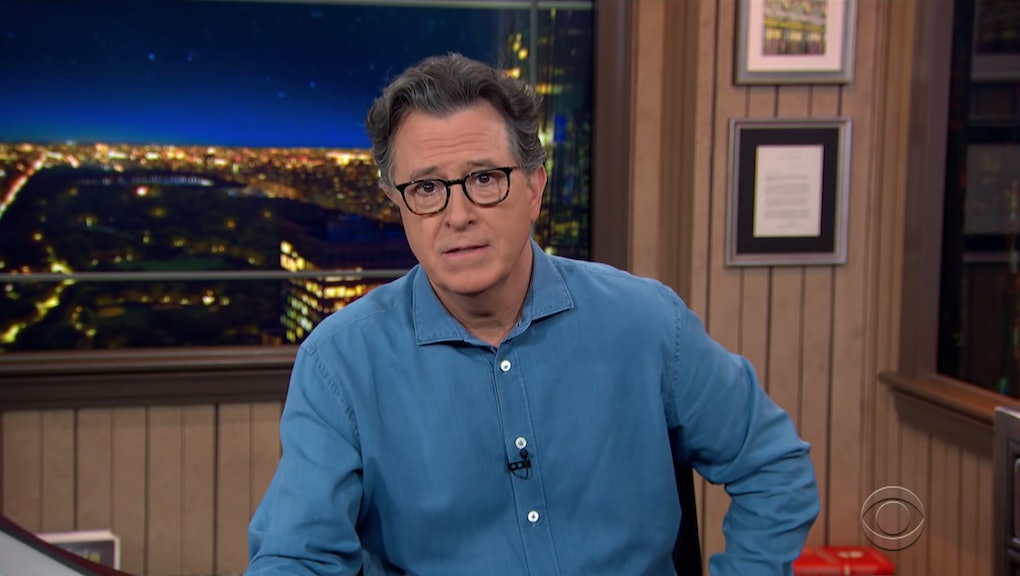 The news that former Minneapolis police officer Derek Chauvin was convicted of murdering George Floyd broke late in the afternoon on Tuesday, right around the time late night shows typically tape episodes. As a result, most of the hosts shoehorned somber statements about accountability and police reform into monologues otherwise dominated by cannabis jokes. Still, since tons of news-weary Americans rely on late night for slightly-less-depressing updates on current events, it felt important to see hosts like Stephen Colbert and Jimmy Fallon mark a momentous day in American history.

“After 10 hours of deliberation, a jury in Minneapolis decided that it’s illegal for the police to murder people; that Black lives matter,” Colbert told viewers in a cold open. “It’s hard to celebrate, because a man is still dead, but there is a sense of relief that at least this one injustice was not compounded with indifference." Colbert celebrated the conviction but emphasized that accountability does not equal justice: "Hopefully this is a step toward a future where police being held accountable for their actions isn’t headline material."

He added that it's up to the American people to keep demanding racial justice, as they have in the streets since last May. "There is more work to be done, and it’s work that all of us should be committed to, because as Ben Crump, the Floyd family lawyer, reminded us today, justice for Black America is justice for all America," the comedian concluded.

Elsewhere on late night, Fallon echoed a lot of what his rival said: "The courts did their job and justice was served, and while this is a step in the right direction, there’s still a lot of work to be done," the NBC host told viewers. We all must continue to call out injustice until things change for the better.” And in the meantime, Fallon promised to entertain folks for an hour.

“Real justice would be Black Americans not having to live in fear of being stopped by police and killed, and surely that is a verdict that we need to work towards," observed James Corden, who's on CBS after Colbert. “I think we’re all grateful that it went the way that it did," Jimmy Kimmel said over on ABC. "And I also want to say, ‘Good luck in prison, Derek, you’ll need it.’ That’s right. I hope you’re there for a very long time.”

By contrast, the discourse on Fox News' late night show Gutfeld! centered on criticizing Rep. Maxine Waters, who rallied with protesters in Minnesota over the weekend and encouraged them to "stay on the street" and "get more confrontational" if a guilty verdict wasn't returned in the Chauvin trial. Host Greg Gutfeld and his guests complained that Democrats were sowing division willy-nilly, even as a majority of Americans thought the ex-cop was in the wrong.

Meanwhile, the comedians most folks would like to hear weigh in on the conviction haven't gotten the platform yet. Trevor Noah and The Daily Show are on hiatus this week. A Little Late with Lilly Singh seemed pre-taped, focusing on the racist war on drugs. Full Frontal with Samantha Bee airs on Wednesdays, Desus & Mero is on Sundays and Thursdays, and Amber Ruffin's show drops most Fridays. In other words, there'll surely be a lot more said about the trial on late-night in the coming days and weeks.

More like this
Steve from 'Blue's Clues' gave us the closure we didn't know we needed
By Kara Weisenstein
The 8 best reality shows you're not watching, but should be
By Brandon Yu
Uma Thurman recounted her abortion as a teen in a powerful rebuke of the Texas law
By Kara Weisenstein
Stay up to date