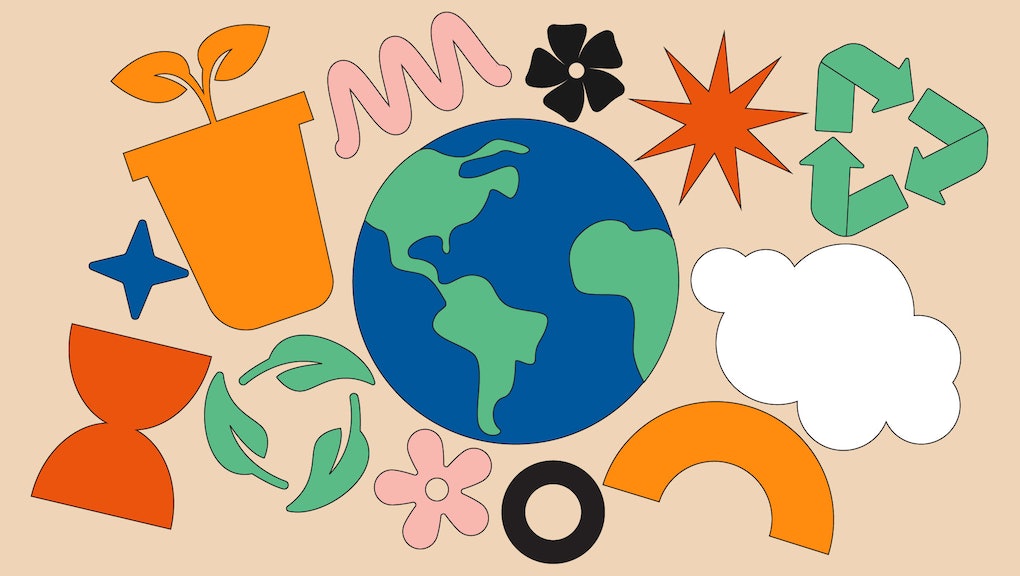 How to go green without trying too hard

Faced with a problem like climate change, it’s easy to feel powerless. When humanity at large is dumping 43 billion tons of carbon dioxide into the atmosphere each year, why should I sort my recycling? When some Americans still don’t believe that climate change is happening, or that people are causing it, why should I change my light bulbs?

It’s true that, even if we replaced every plastic bag on the planet with a reusable tote tomorrow, we’d still be in a hot mess. We need massive, collective action to mitigate the worst effects of climate change; some people even consider the focus on individual action a distraction from the true scale of the problem.

But our personal behavior does have an effect on the environment. A 2018 report by Rare, a nonprofit that uses behavioral science and design thinking to solve environmental problems, found that nearly two-thirds of global greenhouse gas emissions are linked to human consumption. Changing these patterns of consumption has a massive potential for reducing emissions, even absent broader policy change.

Brandon Schauer, who leads a climate change initiative at Rare’s Center for Behavior and the Environment, tells Mic that individual actions can deepen our political commitments and build constituencies for change by influencing others. “Take biking for instance,” he says. “If you didn’t bike but then you started to bike recreationally, or you started to bike to work, suddenly you might find yourself in support of policies about bike safety, bike lanes, things that make the world around you align with your values.”

In the report, Rare has researched a master list of actions that would go the furthest toward cutting carbon emissions if taken up by enough Americans (some popular ideas, like increasing residential recycling or composting, rank surprisingly low). The bad news is, making a sizable dent in our carbon emissions requires a lot of us to act. The good news is, some of the highest-impact changes really aren’t that difficult.

Here are a few that you may find surprisingly easy to pull off:

Order a veggie burger. Or even chicken

As Bill Gate famously reminded us, if cows were a country, they would be the third largest emitter of greenhouse gasses. Not only because their farts release methane, a gas with a greenhouse effect 20 times more potent than that of carbon dioxide, but the land they require (for pasture and growing feed) is often cleared through mass deforestation.

That said, while eating more plant-based proteins (like beans or tofu) and cutting back on the highest-impact meats (such as beef and lamb) is important, you don’t need to go vegan to significantly curb your diet-related carbon emissions. It can be as easy as reducing your beef consumption by the equivalent of one hamburger per week. According to a 2017 analysis by the Washington Post, if you swap beef for beans once a week for a year, you can keep 331 kilograms of carbon dioxide from entering the atmosphere.

Even diehard carnivores can do better. Replacing one five-ounce steak per week with a less environmentally-unfriendly meat, like chicken or pork, can cut your carbon emissions by 260-270 kg per year, the Post analysis found.

One of the lowest-effort ways to reduce your carbon footprint is by offsetting it entirely. Carbon offsets allow you to “negate” your personal emissions by funding projects elsewhere on Earth that pull carbon from the atmosphere or keep it from entering it in the first place. Organizations like Cool Effect make it easy to calculate your carbon footprint and choose a project that resonates with you, like buying a clean cookstove for a family in Honduras or protecting a peat swamp in Indonesia.

And it’s a lot more affordable than you might expect. According to Cool Effect, the average American can offset their annual carbon emissions for about $150. For vegetarians, or people who don’t drive cars, the cost is likely even lower. Many offset projects are backed by 501(c)(3) nonprofits, meaning the donations can be deducted from your tax bill.

Carbon offsets are mostly purchased by companies and governments to reach “net-zero” emissions (emphasis on the net), but there’s an individual market for offsets as well. Some airlines and ecommerce shops have even started offering them at checkout.

At Rare, Schauer and his team have built a pilot version of a program that estimates your carbon footprint by analyzing your spending data. He hopes that soon, offsetting your emissions will be as easy as clicking a button in your banking app. “There was a day when no one thought they would go to their bank to learn about their credit report, but they do that now,” Schauer says. “So I think there's going to be that same adoption curve for helping consumers understand their carbon budgets.”

That said, carbon offsets shouldn’t be viewed as a free pass to pollute. Just as refusing, reducing, and reusing is more important than recycling, cutting back on your consumption before purchasing offsets is key, Schauer says.

If the pandemic has taught us anything, it’s that a lot of meetings could have been a Zoom call. If you’re able to carry that knowledge into your post-pandemic life and reduce unnecessary business travel by one trip per year, you could drastically cut your emissions and save your company some money, without depriving yourself of a vacation.

A round trip flight from JFK to LAX emits on average just over 565 kg of carbon dioxide into the atmosphere per economy class passenger. The footprints of first class and business class seats, which are heavier and take up more space, are even larger than seats in coach.

Opting for the train is your best bet for reducing emissions when you travel; and in many cases (particularly short trips), driving beats flying when it comes to minimizing your carbon footprint.

According to Rare’s report, cutting 140 million business flights between now and 2050 could keep anywhere from two to 17 gigatons of carbon dioxide out of the atmosphere. Hands down, though, the lowest-emitting option — staying home — is also the easiest.

Our elected officials matter a great deal when it comes to addressing climate change and protecting the environment, it turns out. During Donald Trump’s four years in office, he consistently rolled back environmental protections, making it easier for companies to release mercury into the atmosphere and to dump toxic coal ash, lifting bans on fossil fuel exploration in coastal waters off the U.S. and a wildlife refuge in Alaska, and withdrawing from the Paris Climate Agreement, among other things. If he had been re-elected in November, it’s safe to say the United States wouldn’t have re-entered the climate agreement, and we certainly wouldn’t have just committed to halving our greenhouse gas emissions by 2030.

Looking further back, if Richard Nixon hadn’t been president, we might not have the Endangered Species Act, the Clean Air Act, or the Environmental Protection Agency (surprisingly green guy, Nixon).

But it’s not just about who’s in the Oval Office. Voting in candidates who will act on climate change at the state and local level can help prevent the kind of deregulation we saw during the Trump years, which was mostly accomplished via executive order because congress hadn’t enshrined many Obama-era environmental protections in law. Passing the Green New Deal, the most ambitious congressional proposal for tackling climate change, means voting in enough candidates who support it.

Though it’s hard to quantify the carbon-mitigation potential of voting for candidates with better environmental policies, there’s no question doing so is an individual action with the potential for large-scale effect. It’s also something that you can do in an hour or less.

The bottom line: These individual behaviors may only reduce global carbon emissions by a tiny amount — but when it comes to your role in the climate emergency, you simply can’t view your actions in a vacuum. The influence your behavior has on the people around you is just as important as the behavior itself, Schauer says. Solar power, for instance, can be contagious; when one house on the block installs solar panels, others often follow.

In fact, he notes, it’s impossible to predict whether or not someone will change their behavior just by looking at their political affiliation, or even their beliefs about climate change. “The best predictor,” Schauer says, “is actually whether others around you are doing something, and whether you think that they think it's important.”

This article was originally published on April 22, 2021

More like this
How to save your skin from climate change
By Melissa Pandika
Scientists are potty-training cows in an effort to save the planet
By AJ Dellinger
Jeff Bezos is too rich for one lifetime, so he's trying to live forever
By Joseph Lamour
Stay up to date