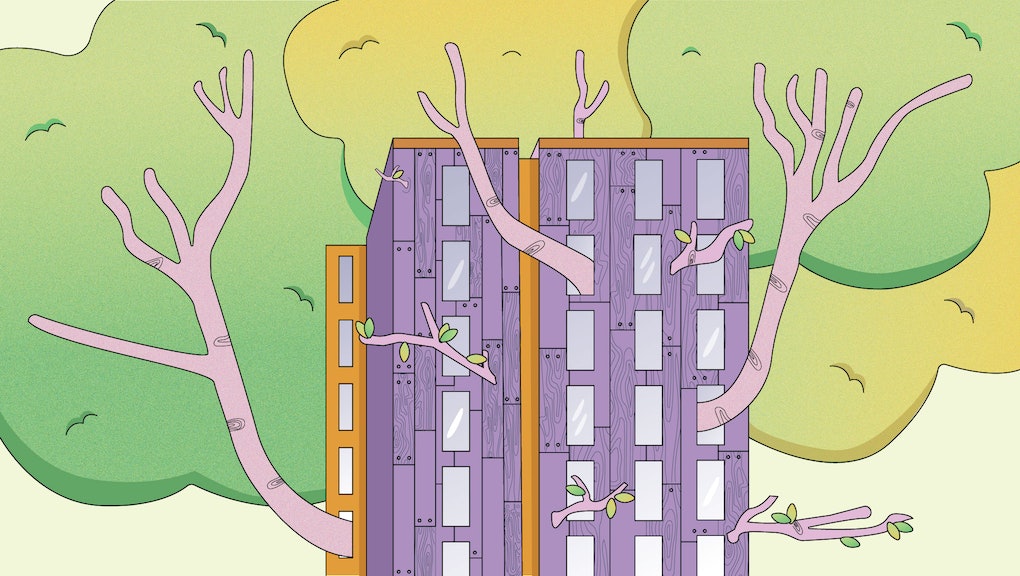 The skyscrapers of the future will be made of wood

If architecture in 2021 is any indication, future skyscrapers might have less in common with the Empire State Building than they do with the 1,300-year-old Hōryū-ji temple in Japan. Its five-story pagoda is one of the oldest standing wooden buildings in the world. It is a testament to the durability of our original renewable building material, timber — which, tweaked by contemporary engineering, might be key to slashing the world’s carbon emissions.

The last decade has seen the emergence of “mass timber” — an umbrella term for engineered woods. The most common is cross-laminated timber, or CLT. With mass timber, buildings aren’t made of whole pieces of wood like a log cabin or garden shed. Instead, they’re made of panels, themselves created by gluing strips of wood together in a crisscross pattern that makes them strong enough to compete with concrete or steel.

That strength is crucial. Currently, the construction and operation of buildings accounts for nearly 40% of global carbon dioxide emissions, and concrete alone accounts for as much as 8%. There’s no way of averting the climate crisis without a significant change to how we build tall buildings.

Panels of mass timber form high-rises such as Norway’s 18-story Mjøstårnet, currently the tallest all-timber building in the world. And using hybrid techniques that incorporate some steel and concrete, architects are pushing the material into further heights, with the 25-story Ascent tower underway in Milwaukee and the 40-story Earth Tower proposed for Vancouver. There’s even a 70-story, 350-meter-tall hybrid timber “plyscraper” in the works for Tokyo, although it’s a long way from being realized.

But two recent changes mean that mass timber is no longer reserved for prestige projects in the world’s richest postcodes. The building material is coming to ordinary apartment and office blocks across America, where it can make a real difference. (It’s got a slight head start in Europe.) The first change is that the International Buildings Code, which most U.S. jurisdictions follow, now allows mass timber buildings of up to 18 stories, making building permits easier to get. The second is that with the new Biden administration committed to taking action on climate change in Washington, bills like the CLEAN Future Act should push the construction sector to reduce emissions.

“As it stands now, mass timber is the product to use to achieve net-zero,” says Dalton Ho, the senior sustainable building adviser at Perkins&Will, an architecture firm that frequently works with mass timber. “If you look at a high-performance building that's as close to zero-carbon as possible, mass timber is kind of the only way you can achieve that right now.”

How mass timber cuts carbon emissions — and even reverses them

The main difference between timber and almost any other building material is that timber acts as a carbon sink, storing the carbon dioxide that trees have absorbed in their lifetime rather than releasing it back into the atmosphere when they die and decompose. Scientists are racing to advance new methods of carbon capture, but trees are currently the only version of the technology that we know how to implement at scale.

But that’s just the beginning. Think of the main material that mass timber displaces — concrete — with its steep CO2 emissions. Those emissions come partly from the chemical reaction of making the key ingredient of cement, partly from the high heats required, and partly out of just how laborious the whole process is. First, a mold for the concrete needs to be constructed on site. Then cement mixers carry and pour the mixture in over a span of weeks. Once the cement mixture is dry, the construction waste from the used mold has to be taken away by more heavy vehicles.

With mass timber, that pollution is avoided. Architect John Klein, who researches mass timber at the Massachusetts Institute of Technology and heads his own timber-focused architecture practice, Generate, describes the material as being “like Legos.” The panels are cut to size in factories, they are lightweight and easy to transport, and when they arrive on-site, they can be fit together with simple tools in not much time at all. The eight-story LifeCyle Tower in Austria was constructed in just over a week using prefabricated timber modules.

While we still don’t know how best to dispose of or recycle timber panels at the end of a building’s life — at which point we’d face having to return its trapped carbon to the atmosphere — Klein points out that the panels are designed for easy disassembly, making reuse possible. And if protected from its main enemy, moisture, timber can have a long, long life. “In Japan, there are timber structures that have been up for thousands of years because they design water shedding in such a strong way,” Klein tells Mic.

There are other benefits to mass timber, including a boost to human wellbeing from the connection to nature and a surprisingly high level of fire resistance. Although we associate wood with burning, trees have evolved a natural protection mechanism against fire: They char on the outside, and that black layer insulates the timber underneath. In contemporary buildings where timber is precision-engineered, that char can protect the underlying structure from flames for hours — well beyond the point at which steel would collapse.

We’ve known how great mass timber could be for years. The difference in 2021 is that, along with the regulatory changes, the costs of the material have come down dramatically, and the supply chains now exist to make mass timber a viable option even in your average American neighborhood.

Klein’s company Generate is among those making the material more accessible. It creates prefabricated timber and hybrid “kits of parts” so that developers and architects don’t have to design and engineer everything from scratch. Instead, they can just access Generate’s library of existing elements, ranging from individual columns and slabs to full bathroom pods. From there, they can customize those plans to their specific needs, see a cost and carbon analysis, and then get their materials made to order. It’s like building Legos, but for skyscrapers.

After a slowdown in construction at the start of the pandemic, Klein says he’s seen accelerating demand for mass timber from developers. Ho from Perkins&Will said the same.

He thinks that being able to observe improvements in water and air quality during lockdowns had a profound effect on people. “I believe seeing those changes helped to make the connection between our everyday lives and the impact on the environment,” he says. And the more people who start to care about this every day, the more demand there will be for climate-friendly methods of everything — including large-scale construction.

But is it enough?

Mass timber is the most transformative technology in architecture right now, but it’s not a silver bullet. Generate’s embodied carbon analysis shows its nearly all-timber design cutting the building’s global warming potential in half, but with more modest reductions for hybrid versions involving steel and concrete. Ho meanwhile points out that while wood may make a structure carbon-neutral or even carbon-negative, there are still all the other materials that go into fitting out a building to consider, like the building facade, insulation, and mechanical systems such as heating and air conditioning.

And with the urgency of the climate crisis, we’re going to have to think a lot more deeply about how and whether we build new buildings at all. At the Architecture of Emergency summit in London last year, architect Maria Smith, the director of sustainability and physics at Buro Happold, an engineering firm, made the case that making real progress on climate change is only possible by “degrowth” — that is, by producing less and distributing the resources we already have more equitably.

“To really make progress, to do more good and not just less bad, we need system change, and critically, we need to be free from the subjugation of obligatory economic growth.” Smith said at the conference. “We must do much more than substituting one way of extracting energy and resources from the Earth and other people for another. ... Substitution is not enough. We must think and act differently.”

At the same time, we can’t stop building entirely. And the building type we have the most need for — urban housing — is the type arguably most suited to mass timber, with its blocky, repetitive floor plans. That’s why innovators like Klein, with his company’s prefabricated designs lowering the barrier to mass timber building dramatically, are optimistic that they’re about to hit the boom times.

“I would say in the next five years, we will see mass timber buildings in every city in the U.S.,” says Klein. “It's going to come fast.”