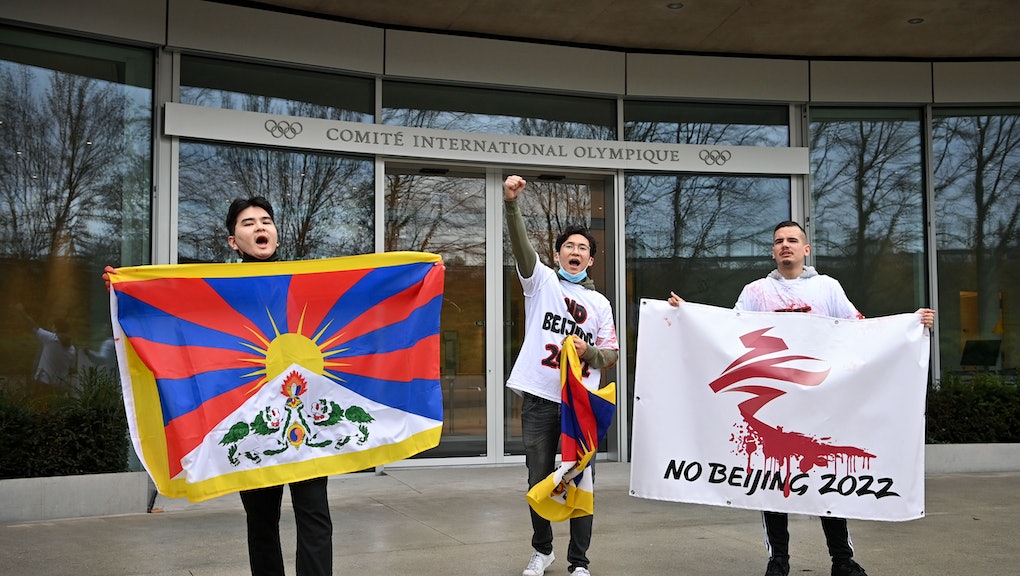 We're just 10 weeks out from the pandemic-delayed Tokyo Games, and the Olympics discourse has been zeroed in on whether or not Japan should still hold them, as the country faces another COVID-19 surge. But human rights groups are focused on the competition slated to begin just six months later — the 2022 Winter Olympics in Beijing. A coalition representing Uyghurs, Tibetans, Hong Kong residents and others who accuse China of human rights abuses are calling for a boycott of the Games next February, according to the Associated Press.

"We call on all governments and people, including all National Olympic Committees and Olympic athletes, to boycott the Beijing 2022 Winter Olympic Games," the group said in a statement. "The Chinese government is committing genocide against the Uyghur people and waging an unprecedented campaign of repression in East Turkistan, Tibet and Southern Mongolia, as well as an all-out assault on democracy in Hong Kong."

The International Olympic Committee, fittingly based in Switzerland, tries very hard to stay out of politics, insisting they must remain "neutral." According to the AP, the IOC draws about 75% of its income from broadcast rights to the Games and 18% from sponsors — meaning corporations have a lot more sway with the Olympics than the competing countries, at least when money is talking.

After years of lobbying by activists, the IOC announced in 2017 it would incorporate human rights principles into future host city contracts. But the first Games these standards apply to is the 2024 Paris Olympics. Beijing is technically exempt, and human rights groups have met with the IOC several times in the last year asking for the Games to be moved.

The Olympics have a shoddy track record of turning a blind eye to human rights abuses, even in recent years. An estimated 60,000 people lost their homes during preparations for the 2016 Rio Games, and police were accused of violently rounding up "street children." The 2014 Sochi Olympics were also overshadowed by forced evictions, the exploitation of migrant workers, media censorship and LGBTQ+ discrimination. Beijing hosted the 2008 Summer Games just over a decade ago and was accused of a whole slew of human rights violations then, too. Some 1.5 million residents were evicted, China tried restricting internet access for reporters covering the Olympics, and the government arrested vocal dissidents.

I know these decisions get made, like, a decade in advance, but it's still baffling that the IOC chose Beijing for 2022 in the first place, since the 2008 Games were controversial way back when George W. Bush was president. A lot has changed since then. A recent U.S. State Department report actually explicitly condemned China for “genocide and crimes against humanity” against Muslim Uyghurs in Xinjiang. I also know the subject is tough for athletes, who only get a short window to compete at their prime and hate that their fates are tied up with international politics. But still, it seems logical that the Olympics should endeavor not to economically prop up governments that abuse their citizens.

All sorts of institutions are being re-evaluated partly due to pandemic disruptions. Maybe the Games should take a real pause to reform, too.