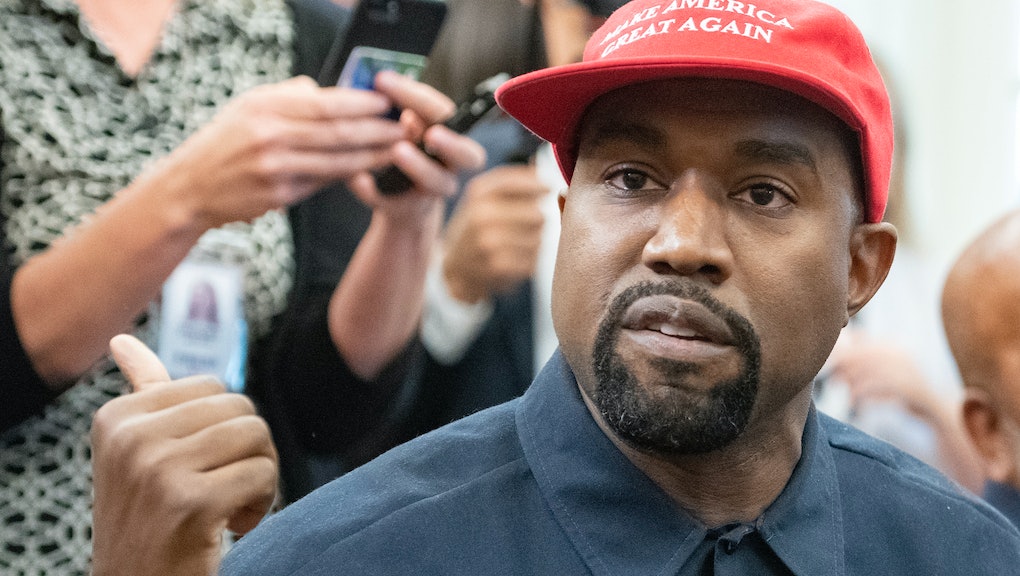 Always a man with a knack for commanding headlines, Kanye West was a guest on the latest episode of Nick Cannon’s podcast, Cannon’s Class, and had a lot to say. The controversial rapper bemoaned it took Forbes so long to dub him a billionaire. He said that God told him to interrupt Taylor Swift’s acceptance speech at the 2009 MTV Video Music Awards, to give Beyoncé the shine “Single Ladies” deserved. And West spoke at length about his opposition to abortion, cementing a pro-life agenda for his political party, the “Birthday Party.”

Nearly 30 minutes into his conversation with Cannon, West broached the topic of abortion and called it “Black genocide.” The rapper repeated an unverified statistic he had previously tweeted, claiming that more than 22.5 million Black people were aborted in the last 50 years. West argued the pro-choice movement was orchestrated “strategically and on purpose” by Planned Parenthood and said the organization was “placed in minority communities to kill Black people.” He claimed that more than 1,000 Black babies are aborted each day and that abortion kills more Black people in America than HIV, homicides, accidents, diabetes, cancer, and heart disease combined.

None of these assertions are backed up by data. But it’s vital we acknowledge the awful truths lurking within West’s unsubstantiated claims. America has an ugly, racist history of eugenics in medicine, including the white supremacist attempt to control Black reproduction through forced sterilization. On his podcast, Cannon mentioned Margaret Sanger, who opened the first birth control clinic in the U.S. in 1916 — and was also a racist. Planned Parenthood recently disavowed Sanger for her “harmful connections to the eugenics movement,” which targeted poor people, people with disabilities, immigrants, and people of color.

Minority communities continue to be disproportionately failed by the health care community; it’s a terrible fact that the color of your skin has been statistically proven to affect the quality of care you receive. Still, Planned Parenthood does provide essential health services to underserved communities, separate from its founder's racist roots. And in the last decade the organization has faced unprecedented attacks — both political and physical. Mic reached out to both Planned Parenthood and West's representatives for comment but did not receive an immediate response.

West told Cannon that religion is at the core of his political platform, which is squarely anti-abortion. “When I came up with the name of my party, the Birthday Party, it was funny. It was just crazy, it was Yazy,” the rapper said. “I can only give God the glory, because the connection point to the Birthday Party is dealing with life and pro-life. Because these are kids that are now gonna get a chance to have birthdays."

West’s bid for the White House has dominated headlines the last couple of months, as he’s managed to get his name on the ballot in some states and failed in many others. But as Cannon pointed out during their conversation, West wields real influence and power whether he’s in office or not. The host pressed his guest on what his critics might say about two men having a long discussion about women's reproductive rights. But West dismissed it as another attempt to muzzle him: “That’s the strategy to take the male opinion out of any conversation, just like taking leaders and males out of neighborhoods in the ‘80s,” he said, evidently referencing racist criminal justice legislation of the era.

It was a neat encapsulation of how West appears to formulates his views: by cherry-picking information and retooling it to fit his own life. Unfortunately, given that the rapper is also running for public office, that leaves journalists to sort through the mess of misinformation in Ye's wake.

Update 4:05 p.m. ET: Planned Parenthood's director of Black leadership and engagement, Nia Martin-Robinson, disputed West's assertion that the organization had somehow preyed upon Black women. In an emailed statement to Mic, Martin-Robinson said: "Black women are free to make our own decisions about our bodies and pregnancies, and want and deserve to have access to the best medical care available. Any insinuation that abortion is Black genocide is offensive and infantilizing."