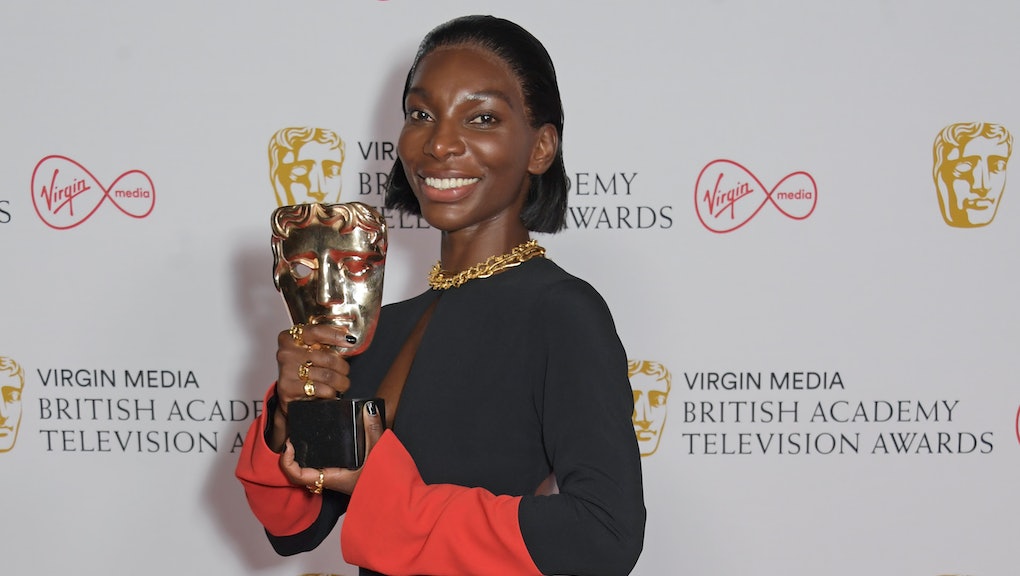 It's great to see Michaela Coel's landmark, genre-defying TV series I May Destroy You being recognized as the profound art that it is. The Golden Globes shamefully snubbed the critically-acclaimed drama — along with a whole lot of other shows and films centered on Black stories. But during the BAFTA awards this weekend in London, Coel took home two big, well-deserved awards: Best Mini-Series and Best Leading Actress, both for I May Destroy You.

Coel turned her acceptance speech for her acting award into a profound moment of recognition for someone who helped shape the series behind the scenes — I May Destroy You's intimacy coordinator, Ita O’Brien. "Thank you for your existence in our industry, for making the space safe, for creating physical, emotional, and professional boundaries so that we can make work about exploitation, loss of respect, about abuse of power, without being exploited or abused in the process," Coel said, dedicating her win to O'Brien.

I May Destroy You explores complex and sometimes harrowing themes around consent and trauma. It centers on a young writer in London, Arabella (Coel), seeking justice and healing after a sexual assault. Variety asked Coel why she specifically thanked O'Brien, and she explained: "I’ve shot without intimacy directors and I’ve shot with Ita — and team members that Ita has trained — and the confidence that it gives you to be able to really tell a story that looks harrowing, that looks inappropriate, whilst being totally appropriate, whilst being protected, means that you’re able to properly tell that story."

Intimacy coordinators are becoming standard practice in Hollywood and beyond, largely thanks to the #MeToo movement, which helped highlight the many ways women are systemically and directly disenfranchised by the industry. For the first time, SAG-AFTRA put out a standardized set of guidelines for intimacy coordinators last year. At the BAFTAs, Coel called professionals like O'Brien "essential" for any production making work about consent. "I know what it’s like to shoot without an intimacy director — the messy, embarrassing feeling for the crew, the internal devastation for the actor," the I May Destroy You writer and star said.

"I also think it’s a very vulnerable place for not just actors, for the crew as well, because the crew might have had experiences and it triggers things for them. So to have her there protects everybody," Coel added in the press room later. "And if you don’t have people like Ita on set when you’re shooting things like that, I think it’s quite thoughtless and I think it’s really inconsiderate and it shows a lack of mindfulness."

More like this
The stars of 'Kim's Convenience' blast its "overwhelmingly white" production team
By Kara Weisenstein
This new Loki teaser touts gender fluidity. But is it just an Easter egg?
By Tim Brinkhof
Willow Smith's latest interview proves "white people's music" doesn't exist, but racism does
By Keith Nelson Jr.
Stay up to date