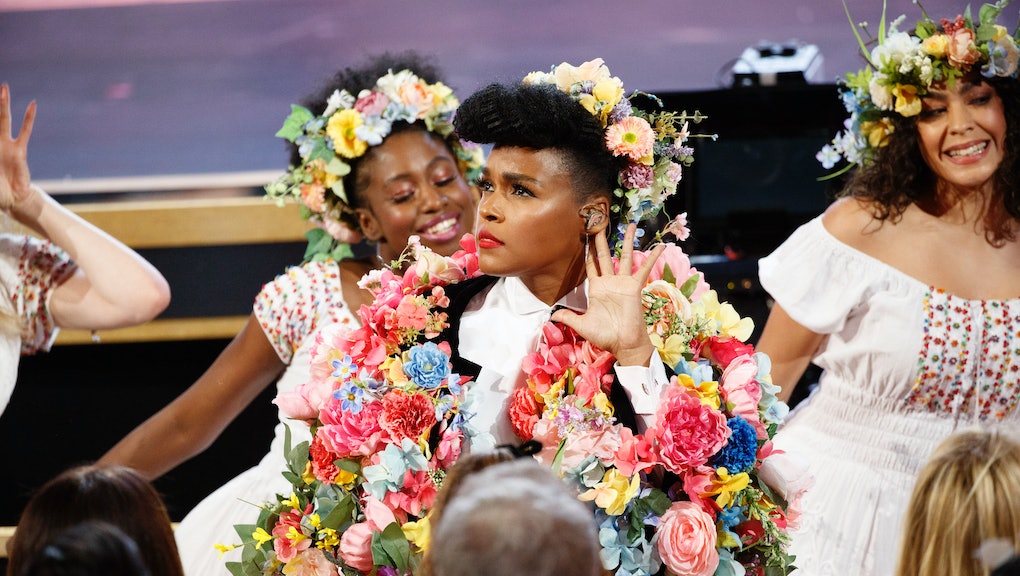 The 2020 Oscars tried too hard to be woke

From the opening moments of the 92nd Academy Awards on Sunday, the Oscars seemed to be apologizing for itself.

Janelle Monáe, who had a supporting role in Harriet, kicked things off with a musical number that appeared to pay tribute to all the films that got snubbed… First, she took the stage in a Mister Rogers-inspired red cardigan, singing “A Beautiful Day in the Neighborhood” directly to Tom Hanks. (He lost the Supporting Actor category to Brad Pitt, recipient of the first award of the night.) Then she launched into a version of her hit “Come Alive,” with dancers dressed as characters from movies like Us, Midsommar, Queen and Slim and Little Women. Bizarrely, there were also a couple dancing Jokers. Monáe had a couple pointed barbs for the Academy: "We celebrate all the women who directed phenomenal films," she said at one point, adding "Happy Black History Month," probably aimed at the Oscars for its lack of diverse nominees this year.

The run-up to the ceremony was marred by controversy and criticism. Not only were women shut out of the directing category, a pattern that’s tiresome but not that surprising at this point, but the Academy also excluded performers of color. Cynthia Erivo was the lone non-white actor to be nominated for any acting award; that’s beyond embarrassing in a year that brought theatergoers masterful movies like Us, Queen and Slim, Waves, Harriet, The Farewell, Parasite, Dolemite Is My Name, and Just Mercy (to name but a few). It’s frankly unconscionable. The movies that led the pack were all centered on white men — Joker went into the Oscars with the most nominations, 11 of them, while 1917, The Irishman, and Once Upon a Time… in Hollywood all tied with 10 nods each.

Thankfully, the Academy somewhat corrected its gaffes Sunday night by lauding Parasite with the four biggest awards of the night. The film and its writer-director Bong Joon Ho swept Best Picture, Best International Feature Film, Best Director and Best Original Screenplay. (Again, it’s insane that this movie earned top accolades, but none of its stars were nominated for acting awards.)

The Irishman was completely shut out last night, but Bong paid tribute to Scorsese: “When I was young and studying cinema, there was a saying that I carved deep into my heart, which is, ‘The most personal is the most creative.’ That quote is from our great Martin Scorsese,” he said via his interpreter. Bong also praised last year’s name change to the international category, and delivered the most memorable one-liner of the evening in response to all his accolades: “Thank you, I will drink until next morning.”

There were other instances of the Oscars (and Hollywood A-listers) trying to atone for the industry’s blindspots. After Monáe’s performance, Steve Martin and Chris Rock (both previous Oscar hosts themselves) took the stage to deliver somewhat of an opening monologue, peppered with jabs at the Academy. “I thought there was something missing this year,” Martin said, and Rock responded, “Vaginas?”

References to the fact that no women were nominated for Best Director (though a wealth of great films directed by women came out last year) peppered the entire telecast. Natalie Portman caused the biggest stir by wearing a custom Dior cape embroidered with the surnames of the snubbed directors on the red carpet last night.

While presenting the Best Documentary Feature award, actor Mark Ruffalo made sure to point out that four of the nominated films were directed or co-directed by women. Sigourney Weaver, Brie Larson and Gal Gadot took the stage together and announced the formation of a “female fight club,” whatever that means, before introducing Eimear Noone, the first female conductor in Oscars history, to lead a medley of Best Original Score nominees.

Despite the evident focus on gender and racial diversity during the telecast, the performative wokeness of this year’s Oscars felt like a futile gesture. Don’t get me wrong: it’s a gigantic, monumental deal that Parasite won Best Picture, making it the first non-English film to do so. That bodes really well for international directors like Bong, who encouraged Hollywood to get over ”the 1-inch-tall barrier of subtitles” in his acceptance speech for Best Foreign Language Film at the Golden Globes.

At the same time, nothing will change in Hollywood till industry gatekeepers reflect global film audiences, and convincing movie moguls to relinquish their power (or at least throw resources towards more representative films) is bound to be an uphill battle. Still, it’s a war worth waging.