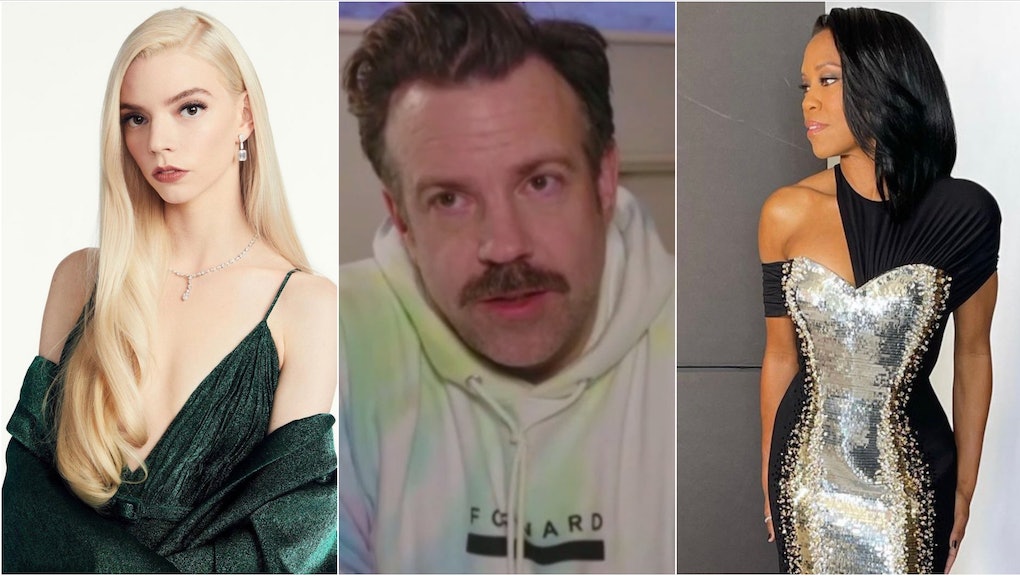 The Golden Globes were extremely chaotic. Thanks to the pandemic, the awards ceremony felt like a messy, extended Zoom meeting, full of the predictable glitches inherent to video conferencing. The specter of institutional racism not-so-subtly haunted the Globes, amid recent revelations that the Hollywood Foreign Press Association (HFPA) hasn't had a single Black member — in two decades. The brazen jokes about it from co-hosts Tina Fey and Amy Poehler, coupled with the institution’s public pledge to diversify, rang hollow to many ears. As everyone’s mother has said at one point or another: actions speak louder than words.

Another weird dynamic was on display during the socially distanced Globes: with most of the celebrities beaming in from their respective couches, nobody quite knew how to dress. Some folks went all-out and served couture glamour, like Anya Taylor-Joy in custom Dior accessorized with over $1 million in diamonds or Dan Levy decked out in head-to-toe Valentino. Other winners gave their speeches wearing more casual looks, like Jason Sudeikis in a tie-dyed hoodie or Chloe Zhao in braided pigtails and a simple green t-shirt.

The fancy-casual fault line did not fall strictly along gender lines. But it was still hard not to notice that many female celebrities still pulled out all the stops, pandemic be damned, whereas lots of their male counterparts felt comfortable phoning it in.

To be crystal clear: I’m not here to shame Sudeikis for (possibly? probably?) getting stoned in his comfy loungewear. The man has been very publicly going through it, ever since his ex-fiancé Olivia Wilde started dating dreamboat pop star Harry Styles. Actually, they were recently forced to form a pandemic “pod” in London to share co-parenting duties, which sounds quite stressful and could explain the need for weed. But actually, it was like 3 a.m. in the UK when Sudeikis gave his speech, so maybe he was just really tired. I majorly digress!

Anyhow, let’s talk about some of the other casually clad gentlemen at last night’s Globes. There was Bill Murray sporting a Hawaiian shirt and drinking a martini, giving laid-back cool grandpa vibes. Ramy Youssef wore a beanie and sneakers. Jeff Daniels sported a Carhartt flannel, looking like he’d just returned from a trip to the hardware store. Don Cheadle gave Sudekiis the signal to wrap up his rambling while wearing a white T-shirt and bomber jacket. Al Pacino wore a suit, but was comfy enough to catch some Z's during the telecast.

Meanwhile, women dominated the best-dressed lists, from Dakota Fanning channelling Grace Kelly in an ice blue Gucci gown to Amanda Seyfried embracing opulence in a dramatic Oscar de la Renta number. Regina King shimmered in a silver, asymmetrical Louis Vuitton dress embroidered with 40,000 sequins. Andra Day evoked the jazz era in an exquisite tulle creation by Chanel. Cynthia Erivo looked like a glamorous Sorry! game piece in Valentino. Sarah Paulson even had a couture arm cast designed by Prada to complement her sleek black gown. Jodie Foster notably dressed-down, appearing in matching pajamas with her wife (and their dog). But even those were fancy Prada pajamas.

Some people might try to dismiss the disparity as sartorial silliness. But what stars chose to wear for the Globes underscored the skewed expectations for male and female performers. Most troublingly, it’s evidence of women working way harder to look good for an institution that has historically ignored them.

Zhao’s win for Best Director for Nomadland is a historic landmark and cause for celebration — she’s the first woman of color to win the award. But it’s also deeply embarrassing that she’s only the second female director in history to take home a Globe. It’s kind of ironic that she was one of the only women to feel comfortable enough to dress-down for the telecast, in a year when everyone had more than enough excuses to do so.

Don’t get me wrong: I love dressing up (and watching others do so). It’s the creative aspect of awards I most look forward to, and the complete absence of “red carpet” looks would be a bummer. But who feels obligated to make an effort shouldn’t be so blatantly gendered.