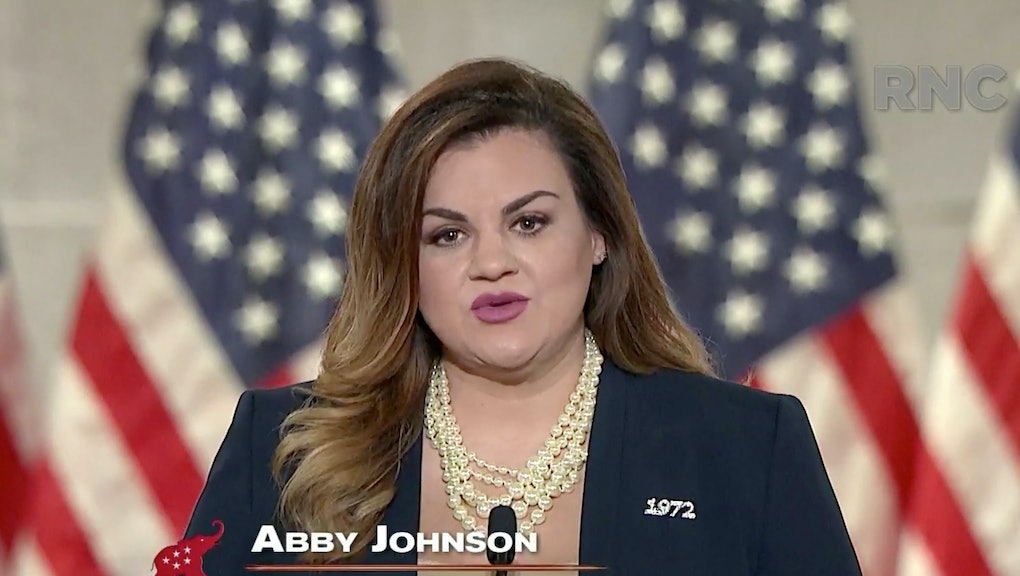 More than anything, the Republican National Convention seems like a supersize fan club for President Trump. But, it seems the RNC implemented a little bit of strategy with one of its guests last night — even if the speaker they turned to was questionable. On Tuesday night, the RNC appealed to Trump's evangelical base with a speech from Abby Johnson, an infamous anti-abortion "activist."

You might know Johnson as the inspiration behind the 2019 anti-abortion film Unplanned, which is based on her 2011 memoir of the same name. Much of Johnson's "activism" has centered around her conversion story: She was formerly a Planned Parenthood clinic director in Bryan, Texas, and she now touts anti-abortion propaganda.

During her speech, Johnson took time to go after her former employer, accusing Planned Parenthood of having "racist roots." She also told attendees that "Planned Parenthood abortion facilities are strategically located in minority neighborhoods." To be clear, Johnson's claim is incorrect, as the American Public Health Association says "there is no evidence of racial targeting" by abortion clinics, but "documented disparities in abortion rates in the United States mirror other fundamental inequalities." This isn't the only evidence of false statements by Johnson, as her journey from clinic director to anti-abortion figurehead has been in dispute since she began telling the story.

Going after Johnson's speech for incorrect claims is easy, but it misses the overarching point of why she was at the RNC at all. Johnson didn't speak at the RNC to educate people about abortion. While her inaccuracies should be noted, people also need to recognize that it doesn't matter to the crowd she's meant to appeal to.

Since his first campaign, Trump has appealed to evangelicals as a significant portion of his base. Vox reported that Trump's promise to overturn Roe v. Wade upon taking office likely contributed to his overwhelming win with white evangelical voters back in 2016, despite the fact that he's a twice-divorced man with a history of making crass comments and has been credibly accused of sexual assault dozens of times. (He's denied all allegations.)

It's a base of voters he needs to maintain in order to stay in the Oval Office. That's why throughout his presidency, Trump and his administration have continued catering to anti-abortion crowds, including by with reinstating the global gag rule, and demanding the U.N. remove abortion access from its coronavirus pandemic plan.

Trump wasn't always as staunchly anti-abortion as he is today. In 1999, Trump told then-moderator of Meet the Press Tim Russert, "I hate the concept of abortion. I hate everything it stands for, I cringe when I listen to people debating the subject. But you still — I just believe in choice ... I am strongly for choice and yet I hate the concept of abortion." But as Trump started to realize his desires to run for office, he evolved into the president we know today, even appearing at the March for Life earlier this year.

Johnson, meanwhile, was already making waves before she appeared on the RNC stage Tuesday night. On Monday, Vice reported on a now-deleted video in which Johnson said police would be "smart" to racially profile her adopted biracial son. "Statistically," Johnson said in the clip, "my brown son is more likely to commit a violent offense over my white sons.”

It certainly is a choice to have a speaker who would make such comments about her own son during a summer defined by civil unrest around policing. Then again, the RNC also hosted the gun-touting St. Louis couple who threatened protesters, so Johnson's inclusion is par for the course.

Of course, Johnson didn't stick to only trashing Planned Parenthood at the RNC. She went on to make an appeal directly to anti-abortion crowds, stating, "This election is a choice between two radical anti-life activists and the most pro-life president we have ever had. That is something that should compel you to action, go door-to-door, make calls, talk to your neighbors and friends, and vote on Nov. 3.”

More like this
Supreme Court justices' political leanings: A guide to the 2021 court
By Vanessa Taylor
The GOP has tried to kill Obamacare for a decade. SCOTUS just saved it for a third time
By Rafi Schwartz
Uber offered its drivers help with health care, but of course it was a mistake
By AJ Dellinger
Stay up to date