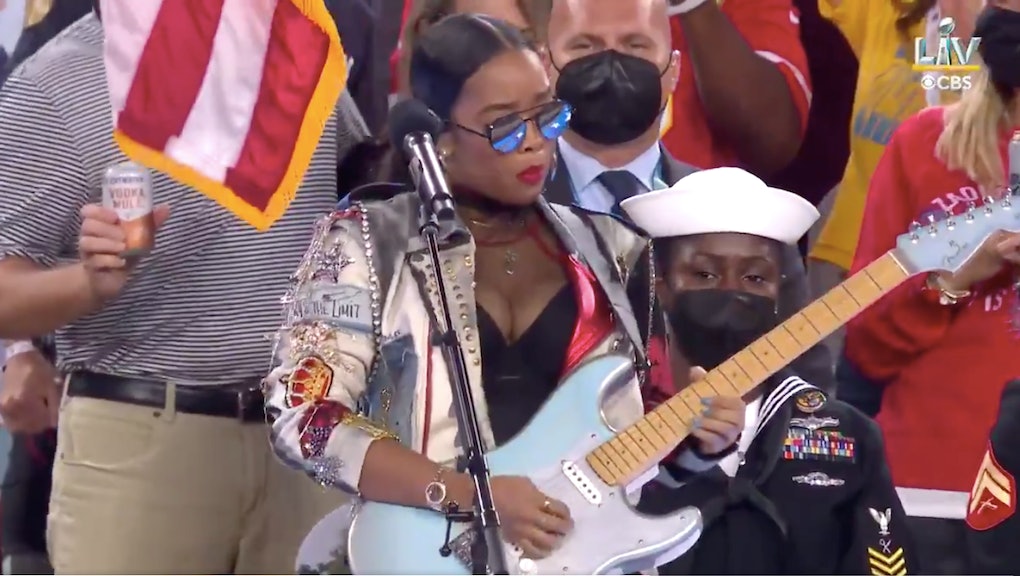 The women of the Super Bowl were the real stars

Whether you loved it or hated it, there’s no denying the Weeknd’s Super Bowl halftime show got people talking. And meme'ing. Personally, I was left wondering what on earth he spent millions of Pepsi’s money plus $7 million of his own fortune on? The man didn’t drop from the heavens like a glittering spider the way Lady Gaga did at Super Bowl LV. Maybe fitting hundreds of backup dancers with N95 masks — I mean bandaged balaclavas — was really pricey.

But I don’t want to talk about the Weeknd anymore. The Weeknd was fine. The Weeknd made people dizzy. And I don't want to even start talking about Tom Brady. Instead, I’d rather pour out a few hundred words in tribute to the stunningly talented women who dazzled us during Super Bowl LV: singer-songwriter H.E.R., R&B singer Jazmine Sullivan, and poet Amanda Gorman. They breathed fresh and thrilling artistry into some of the most traditional moments of the game.

First up was H.E.R., performing an electrifying rendition of “America the Beautiful” that included a face-melting guitar solo. “I wanted to do it the way nobody has ever done it before,” she told Gayle King on CBS This Morning. “The plan was to create an arrangement that was totally me and represented so many different versions [of the song]. I listened to a lot of different versions and was like, ‘You know what? I gotta take it to my world,’ and start with a soft intro, bring in some strings, and then we gotta rock it out. But that was the idea, to do something different.”

Sullivan took the stage next, to perform “The Star Spangled Banner” with country artist Eric Church. He’d previously sworn-off ever performing the national anthem (it’s really hard to sing) but reconsidered when the opportunity to duet with Sullivan turned up. Not to be mean or anything, but she certainly outshone him sonically and literally, performing in a pearlescent pantsuit and glittering headpiece fit for music royalty. But their pairing was a poignant bridging of genres, meant to appeal to all sorts of NFL fans. “We wanted to show that you could come together and bring some unity within song,” Sullivan told CBS.

More importantly, powerful back-to-back performances by two Black women on one of the world’s biggest stages sent a “powerful message,” H.E.R. observed during her CBS interview. “That was a good example of ‘black girl magic,’ a lot of people are saying,” King noted in reply. Jennifer Lopez and Shakira sharing the stage last year was a groundbreaking moment for Latina artists; it’s cool to see the Super Bowl carving out space for Black women this February.

On a similar note, the NFL also invited Gorman to perform before the big game. It’s the first time in history that poetry played a role in the Super Bowl. But after Gorman became a viral sensation for her poem “The Hill We Climb” at President Biden’s inauguration, verse is in vogue. On Sunday night, Gorman celebrated three specially-chosen frontline workers with a poem titled “Chorus of the Captains.” The honorees were Pittsburgh-based Marine veteran James Martin, Los Angeles teacher Trimaine Davis, and Tampa ICU nurse manager Suzie Dorner.

Gorman recently shared her take on the role of poetry in unconventional settings, like the Super Bowl, with Trevor Noah on The Daily Show: "These are the moments I strive for in my lifetime, which is to bring poetry into places that we least expect it, so we can fully kind of grapple with the ways in which it can heal us and kind of resurrect us." Somebody get this woman a championship ring already. She won the Super Bowl in my humble opinion, not that dude Tom Brady.