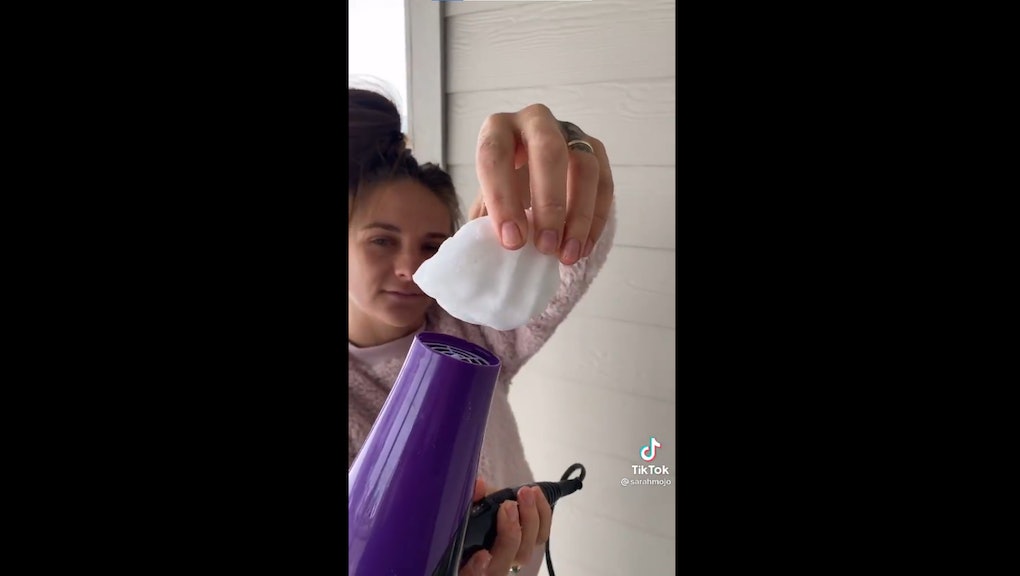 TikTokers are trying to prove that snow is a government conspiracy

TikTok is no monolith. Within one app, you can listen to enchanting sea shanties, learn how to regain your sense of smell after having COVID-19, and, apparently, watch a bunch of people try to convince you that the snow in Texas is fake. As Texas continues to thaw out and recover from its horrifying winter storm and utilities crisis, conspiracy theorists are spreading word about what they believe is a deep state plot to produce a massive snowstorm.

Their apparent evidence? The snow itself — or, more specifically, the fact that if you pick up a big chunk of snow and take a lighter to it, the glob won’t melt right away. Instead, you might see black charring on the side — which, the conspiracy theorists say, is clearly evidence of a metallic snow substitute dropped on Texas to convince people climate change is real.

As with anything on TikTok, you have to lend a charitable reading to shake out if some of these people are being knowingly ironic — but after watching enough of these things, the evidence tends to pile up that some people really believe the snowstorm is a psychological operation engineered by some combination of Bill Gates, the shadowy deep state, and Joe Biden to make doofs like Ted Cruz look bad for vacationing in Cancun and relying on Texas’ deregulated energy grid.

Here’s one user, who picks up a snowball, holds a candle flame to it, and drops a big gotcha when the snow doesn’t melt away and leaves a black mark. Then, she tries it again with a hair dryer:

Another video features a woman insistent that the snow is fake because it doesn't melt over a lighter in her kitchen. Instead, she says, Gates and the government have simply tried to convince the masses the snow in Texas is real. “Thank you, Bill Gates, for trying to fucking trick us that this is real snow,” she says.

Another woman put out a call for TikTok users in other states to burn snow to compare to Texas, since, she says, it might be a targeted effort by Biden to retaliate against states that didn't vote for him:

The actual explanation is much simpler: The charring is due to sublimation, or the process of solid transferring directly to gas, rather than melting into liquid, as it might when snow gradually erodes as the weather gets warmer, USA Today reported. Those black spots are soot, which forms because snow only allows for incomplete combustion, Dr. Tandy Grubbs, professor and chair of the department of chemistry and biochemistry at Stetson University, told USA Today.

But I suppose that's a bit less exciting than a Microsoft-deep state alliance.