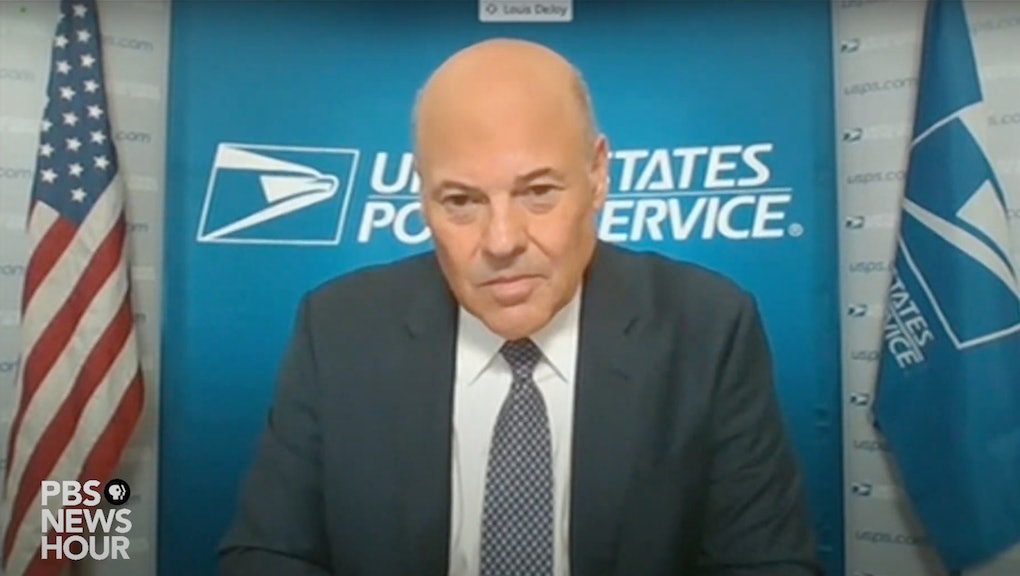 Louis DeJoy, the former Trump campaign donor-turned-postmaster general, appeared remotely before the Senate Homeland Security and Governmental Affairs Committee on Friday in a scramble to justify the ongoing attacks from the Trump administration on the U.S. Postal Service, as well as his own reported efforts to significantly hamstring the agency he leads.

DeJoy, who incidentally owns significant stock in the USPS-contracted XPO Logistics company, fended off fierce questioning from both Republican and Democratic senators who seemed keenly aware that attacks on the post office represent something of a third-rail of politics, able to animate voters from across the political spectrum like few other issues can.

Contrary to Trump's fear-mongering, DeJoy stressed that "the Postal Service is fully capable and committed to delivering the nation’s election mail securely and on time." He also admitted that he personally votes by mail, and encouraged others to do so as well.

But when pressed on a number of changes implemented during his tenure — including the removal of crucial mail-sorting machines and cutting overtime and work hours — DeJoy defended the policies, even while admitting that delivery service has indeed slowed down recently.

Perhaps most significantly, DeJoy pointedly refused to walk back the steps he's taken in recent months to reduce the post office's capacities, telling GOP Sen. Rob Portman (Ohio) that when it comes to reinstating the decommissioned mail-sorting machines, "there's no intention to do that. They're not needed." He later reiterated the same sentiment to Democratic Sen. Tom Carper (Del.), explaining, "It's insignificant, it's not material to anything that we do. And we're sticking to where we're at right now."

DeJoy also notably denied foreknowledge that nearly 1,000 mail collection boxes had been removed under his watch, telling the committee, "I had no idea that that was a process," adding that with regard to "both the collection boxes and this machine closedown, I was made aware when everybody else was made aware."

When pressed to make available the analysis he'd used to asses how the changes would affect some mail customers, DeJoy refused to commit to sharing his work.

DeJoy also expressly denied the drumbeat of allegations that his changes were politically motivated to both help skew the upcoming 2020 election and achieve the longstanding Republican goal of privatizing the USPS. He also, confusingly, claimed he had never discussed the Postal Service or its fate with Trump after he was appointed to the role.

In fact, DeJoy and Trump met in early August, nearly a month and a half after DeJoy assumed the role of postmaster general. The White House did call the summit a "congratulatory meeting." But notably, their meeting occurred in the midst of the president's attacks on mail-in voting, and just ahead of a negotiation meeting with congressional Democratic leadership. Trump initially denied speaking with DeJoy at all, saying a few days later, "Well, I didn't speak to the postmaster general ... I know this: He's a very good businessman. He's very successful."

At the exact same time DeJoy was testifying before the Senate committee, Pennsylvania Attorney General Josh Shapiro announced that he had filed a lawsuit against the postmaster general to "protect the Postal Service and make sure every eligible vote counts."

Per CNN, Pennsylvania's lawsuit was filed along with California, Delaware, Maine, Massachusetts, and North Carolina, plus Washington, D.C.

The whole affair, from DeJoy's unctuous self-justifications to the ghoulish efforts by some Republican senators to downplay the significance of the Postal Service's work, is likely best encapsulated by a hot mic moment courtesy of Carper, the Delaware senator. In a fit of extremely relatable technological confusion, he offered this poignant bon mot:

More like this
This poll shows just how strong Trump's hold on Republican voters is
By AJ Dellinger
Oops, the Arizona recount the MAGA crew demanded actually took votes away from Trump
By Rafi Schwartz
Trump's brilliant 2022 strategy is for Republicans to get into a messy intra-party fight
By Rafi Schwartz
Stay up to date