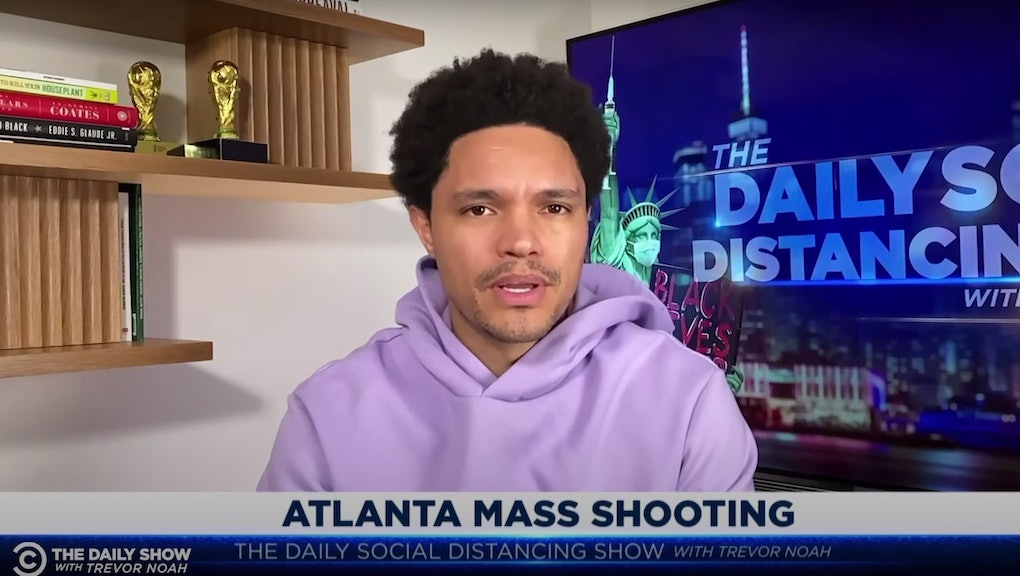 In the wake of unimaginable violence, Trevor Noah is often the public figure who most eloquently calls out racist bullshit. The Daily Show was on hiatus the week after police murdered George Floyd, but the comedian posted an emotional, 18-minute video on Instagram about the deadly consequences of systemic racism. In September, he addressed conservative backlash to the ongoing Black Lives Matter protests: "I think sometimes in society, people get more focused on the symptoms than the cause," Noah said then.

The late-night host reiterated that salient point on his show on Wednesday, reacting to the mass shooting in Atlanta that claimed the lives of eight people, six of them Asian women. Noah said that it is extremely frustrating to witness this sort of senseless violence in America over and over again. "Why are people so invested in solving the symptoms instead of the cause? America does this time and time again. A country that wants to fight the symptoms and not the underlying conditions that cause those symptoms to take effect," he argued.

Noah blasted the country for not seeing this coming and proactively protecting Asian-American communities. It’s not like people weren’t warned: there has been an appalling spike in anti-Asian racism in the last year, according to Stop AAPI Hate. There were 3,800 separate incidents reported to the group between March 19, 2020 and February 28, 2021; 503 of those cases were in 2021 alone. "We see these things happening. People have been warning, people in the Asian community have been tweeting, saying please help us," Noah said in his monologue.

He also denounced the way the deadly attack has been spun by the media, law enforcement and the killer himself to downplay the role of racism. "Whatever you do, please don't tell me that this thing had nothing to do with race," Noah said. "Even if the shooter says that — he thinks it had to do with his 'sex addiction' — you can't disconnect this violence from the racial stereotypes people attach to Asian women. This guy blamed a specific race of people for his problems, and then murdered them for it. If that's not racism, then the word has no meaning."

Noah had a direct message for the shooter: "Fuck you, man," he spat. "Your murders speak louder than your words."

More like this
This couple's gender reveal stunt started a deadly wildfire. They're now facing 20 years in jail
By Joseph Lamour
Films based on real life tragedy often lead to exploitation of real life people
By Chloe Stillwell
'Dr. Death' clings to the wrong part of a true story
By Chloe Stillwell
Stay up to date