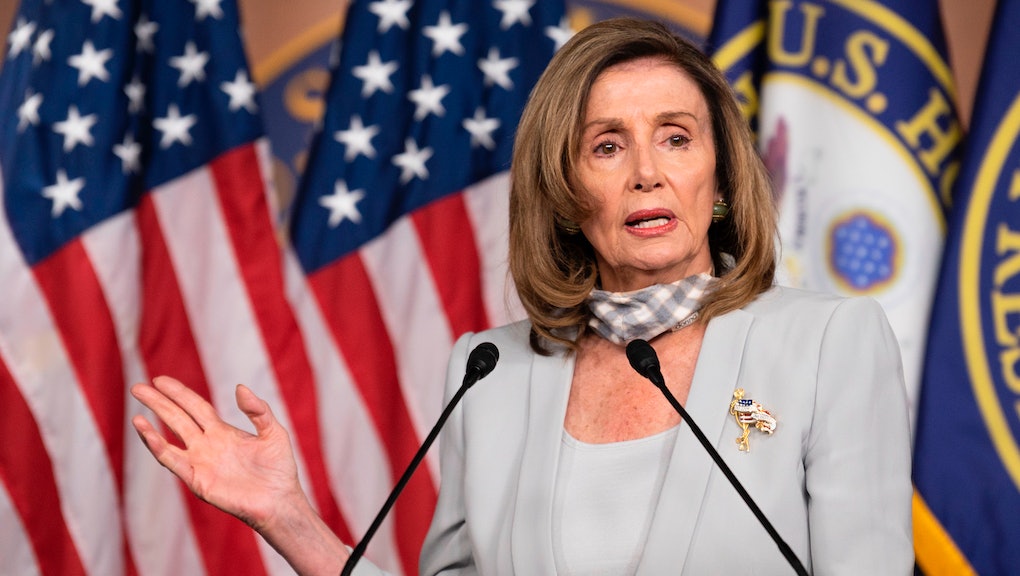 With the USPS under siege, representatives will return to the House early for a vote

In the midst of a pandemic, the United States Postal Service may be the key to holding safe elections this November. But for months, President Trump has opposed mail-in voting at every turn, going so far as to withhold vital funding for the agency. Now, the House is cutting is recess short over Trump's attacks on the USPS.

On Sunday, House Speaker Nancy Pelosi called on the House to reconvene early, writing, "The Postal Service is a pillar of our democracy. ... Alarmingly, across the nation, we see the devastating effects of the president’s campaign to sabotage the election by manipulating the Postal Service to disenfranchise voters." The chamber had adjourned for a summer recess, igniting criticism over their decision to vacate Washington while the USPS is under consistent attack.

Pelosi went on to note that Postmaster General Louis DeJoy — who has donated millions to the Republican Party, including Trump's own campaign — has "proven a complicit crony" in the president's efforts to halt services. Trump appointed DeJoy as postmaster just a month after urging Republicans to "fight very hard" against mail-in voting, incorrectly claiming it would lead to widespread voter fraud.

Since then, the Trump administration's sabotage on the USPS has rapidly unfolded. Last week, Trump basically admitted he's withholding funding to the postal system so people can't vote by mail. He told Fox Business: “Now they need that money in order to make the post office work so it can take all of these millions and millions of ballots. ... But if they don’t get those two items that means you can’t have universal mail-in voting.” Trump has repeatedly sowed distrust of mail-in voting, incorrectly labeling it as fraudulent, despite that fact that he's done it himself.

The House is reconvening early specifically to vote on New York Rep. Carolyn Maloney's "Delivering for America Act", which would stop the USPS from implementing any changes to operations or services it had in place on Jan. 1, 2020.

Maloney, who chairs the House Oversight and Reform Committee, also called upon DeJoy to testify at an "urgent" congressional hearing later this month. In a letter to DeJoy, Maloney wrote, "Your testimony is particularly urgent given the troubling influx of reports of widespread delays at postal facilities across the country — as well as President Trump’s explicit admission last week that he has been blocking critical coronavirus funding for the Postal Service in order to impair mail-in voting efforts for the upcoming elections in November."

Per The Hill, the hearing was originally planned for mid-September. However, Maloney decided to move ahead with a speedier timeline, setting a new date of Aug. 24 following reports of lengthy delivery delays, removal of mail-sorting machines, and more.

While the House can pass Maloney's act, it's unclear whether the Senate will return from its recess early, and how the bill would fare in the GOP-controlled upper chamber. However, there are some Republicans who represent rural states where their constituents are reliant upon the USPS. According to The New York Times, Republican senators in Montana and Alaska are facing competitive re-election races and so may be feeling pressure to fix the Postal Service.

In addition to bringing the House back early, Pelosi called on representatives to appear at a post office in their district on Tuesday. Meanwhile, seven states — including Virginia, Pennsylvania, and Minnesota — are considering suing the Trump administration to prevent it from doing any more harm to the essential service.

More like this
A Philly foster agency can continue discriminating against LGBTQ families, SCOTUS rules
By Rafi Schwartz
Kamala Harris's trip to Guatemala highlights Biden's impossible task on immigration
By Vanessa Taylor
Why are there protests in Colombia? How a tax proposal ignited decades of unrest
By Ray Levy Uyeda
Stay up to date