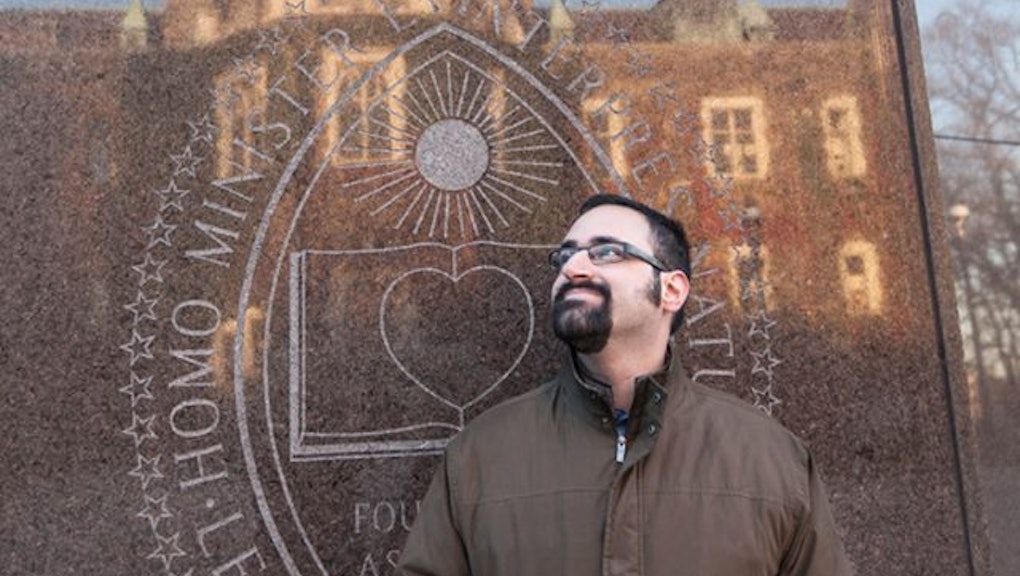 Matthew Rozsa is a Pennsylvania patriot, a self-proclaimed history nerd, and our thoughtful politics pundit of the week.

As part of the "pundit of the week" column, we spotlight one PolicyMic-er to share personal experiences with our community, and pose one never-been-asked question to a staff member. Matt asks me to take on his question about what PolicyMic has learned from our writers, and offer advice to aspiring pundits.

About Matt: He is a born bibliophile and a proponent of pugnacious progressive punditry. Matt's heroes include Abraham Lincoln, Adlai Stevenson, Mark Twain, and Voltaire. At one point in his life, he wrote plays (and even had one performed).

Caira Conner (CC): First things first. When and why did you get involved with PolicyMic?

Matt Rozsa (MR): I first got involved with the site in February 2012 when Jake Horowitz saw an editorial of mine on Ron Paul and asked if I'd be interested in having PolicyMic run it. I looked up PolicyMic's background, saw that it was a political site dedicated to cultivating intelligent debate among millennials, and became immediately interested in participating in any way I could.

CC: Most of your work on PolicyMic is for our politics section, but you've also written personal narratives.  Why is PolicyMic an effective platform for your cause(s)? Is there something you wish you could change about your user experience?

MR: When it comes to my political op-eds, PolicyMic is a great platform because I can discuss a wide range of topics. Hell, in the last five weeks alone I've written about budget policy, food stamps, immigration reform, gay rights, the digital revolution, Ted Cruz, horror movies, the 2012 presidential election, anti-Semitism, and the 150th anniversary of the Gettysburg Address. Not only have these subjects allowed me to incorporate my interest in American history with my passion for progressive political causes, but the variety keeps me on my toes and forces me to become a better writer. If I was still posting on my own small blog, I would have a much smaller audience, and it would be easy to fall into a creative rut. Because PolicyMic has such diverse political content, that doesn't happen here.

While it wasn't easy for me to open up about some of my more sensitive experiences, I eased into it when I saw how others were doing the same thing. It's a bit like entering the ocean — you may bristle at the temperature and get tossed around by the waves, but if you stick around long enough to get used to it, the experience can be cathartic and rewarding.

In terms of my personal narratives, PolicyMic has a writing and editorial staff which is so supportive (as well as so open about their own personal experiences) that it creates a comfortable atmosphere. While it wasn't easy for me to open up about some of my more sensitive experiences, I eased into it when I saw how others were doing the same thing. It's a bit like entering the ocean — you may bristle at the temperature and get tossed around by the waves, but if you stick around long enough to get used to it, the experience can be cathartic and rewarding.

CC: What is one outcome you'd like to result from your engagement with PolicyMic? Any ideas for the best way to make this happen?

MR: Obviously I would like to develop a meaningful brand for myself as a political pundit. In addition to that, I historically contextualize my analysis on political events as often as possible. While I don't agree with the cliché about history repeating itself, I strongly believe that the events of the past can teach us a great deal about the present. No matter how much political, social, economic, and technological conditions change, human nature is constant, so one of the best ways to understand the present is to analyze how people have reacted to analogous scenarios in the past. If I'm able to do even a little in bringing that perspective to my take on current events, I will be very happy.

In terms of the best way to make that happen... Well, that's difficult. The challenge reminds me of an observation by the Roman emperor Marcus Aurelius, who once wrote that "The object of life is not to be on the side of the majority, but to escape finding oneself in the ranks of the insane." Unfortunately, insanity spreads like wildfire in political discourse. I try my best to remain detached so that my partisan biases and ideological predispositions won't put me on the wrong side of an important issue. I probably fail at this more often than I'd like to admit, though.

CC: You started with us on the now "old" PolicyMic site. How does it compare being a pundit on the relaunched platform?

MR: For the most part, the experience is the same. It took a little time to adjust to the new format, but there aren't any significant differences in how I write articles.

MR: My main priority right now is completing my Ph.D program at Lehigh University. Because I'm a full-time student in the history department there, my hands are pretty full. I'm also as active as possible with the local Democratic Party and was even lucky enough to manage the campaign of one of the county council candidates. I also enjoy hanging out with friends (which I occasionally merge with my activities on this site, such as when I attended a film festival screening), going on movie binges (anything from Alfred Hitchcock to B-movie horror fare), and of course, reading. I'd like to say that my apartment has its own little library, but it looks much closer to what would happen if a library was hit by a tornado.

CC: Your turn. What's one question you have for a member of our staff?

MR: My question is for you, Caira. What would you say are the main lessons you've learned from having interviewed so many PolicyMic pundits? What advice would you give to other aspiring writers, both here and from other sites?

CC: Ahh, excellent question. I'd say that PolicyMic is never going to run out of supremely talented pundits, never going to run out of original perspectives, and always going to have a community acting as our biggest resource pool. Bold to say "always" and "never", but it blows my mind how intelligent and sophisticated these young writers are, and how enthusiastic each is to get their voice out in the open. It is inspiring, it is humbling, and sometimes, it is just baffling.

Thank you, Matt, for sharing your experiences and ideas with us. You help make PolicyMic great.