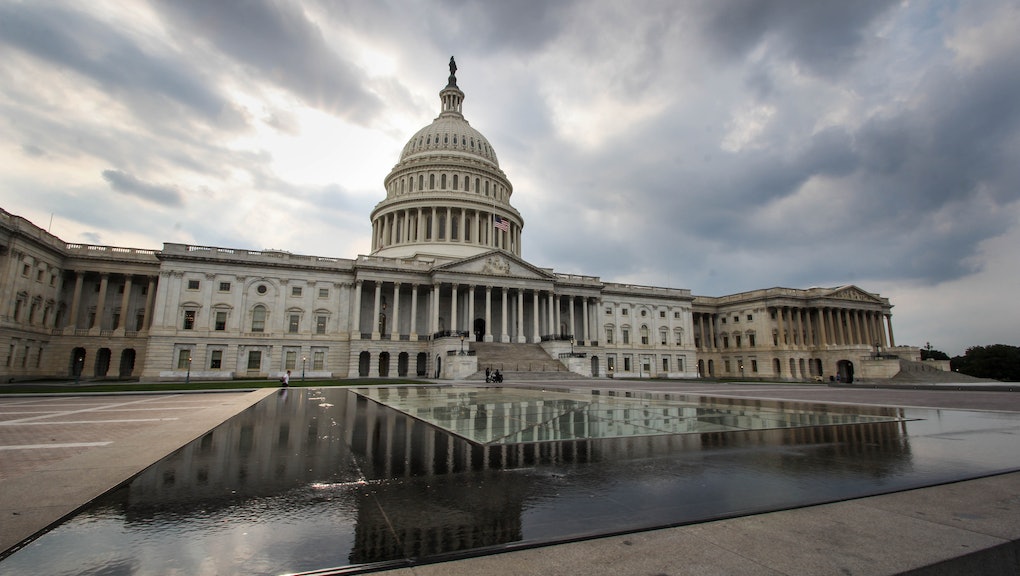 With all the data floating around, you probably had a sense that our generation isn't the biggest fan of our politicians and government. But according to a new poll by Harvard University, the figures are much, much worse that we might have thought.

The poll, released Tuesday by Harvard's Institute of Politics, found that young Americans have less trust in government than ever before, with 18- to 29-year-olds' level of trust toward the president, Congress, the military, the Supreme Court and the federal government in general dropping to record lows.

The president and the military took the biggest hit, dropping 7%. The pollsters said levels of trust in "most American institutions tested in our survey" had fallen lower than even "last year's historically low numbers."

This is really bad news, and yet another big signal that our government is no longer responding to citizens' needs. The charts speak for themselves:

In a more in-depth chart, young people expressed majority confidence in precisely zero of the institutions mentioned in the poll. As of this month, only the military breaks the 40% barrier at 47% confidence. And private institutions don't fare much better, with just 12% expressing trust in Wall Street and 11% in the media.

What's next? The pollsters suggest that this loss in confidence is directly correlated to a measured lack of interest in the upcoming 2014 midterm elections.

"Currently, less than one-in-four (24%) young Americans under the age of 30 say that they will 'definitely be voting,' in the upcoming midterm elections for Congress, a sharp decrease of 10 percentage points since the Fall. During a similar time of the year in 2010, 31% of 18- to 29-year-olds reported that they would definitely vote."

And Democrats should be concerned, because the poll also suggested that Republicans are doing better than the left in this environment.

"Currently, there seems to be more enthusiasm for midterm voting among traditional Republican consistencies than Democratic ones. For example, 44% of those who voted for Mitt Romney in 2012 say they are 'definitely voting,' which is a statistically significant difference compared to the 35 percent of 2012 Obama voters who say the same. Additionally, self-identified conservatives (32%) are 10 points more likely to vote than liberals (22%)."

And the new generation of voters is ever-so-slightly to the right of their predecessors.

Who can help? The survey did find that likely 2016 presidential hopeful Hillary Clinton enjoys a significant 52% favorable rating among 18- to 29-year-olds, while Chris Christie slots in at just 21%. But that seems a little unfair, given that the New Jersey governor's scandal-ridden year has perhaps knocked him out of frontrunner status.

But beyond short-term electoral gains or losses, the survey paints a grim portrait of Millennials' faith in the U.S. government. And other studies suggest our pessimism isn't limited to just the feds. A recent Ipsos MORI poll found that just 26% of those under 30 in the U.S. feel that their lives will be better than their parents' generation.

For Millennials in the U.S., the future still seems rather bleak. And that's something we should all be very concerned about because if young people don't even have optimism, they don't have very much at all.

And, unfortunately, there's a lot to be pessimistic about these days. Once you get past the modern world's smartphones, great TV and superhuman Google vision, it can be a pretty scary place. The economy isn't also exactly welcoming, with Millennials expected to "bear the brunt of pay cuts and layoffs, translating to lower salaries that will dog many of us for the rest of our lives."

Top economists are pessimistic about the future. Current thought-leader Thomas Piketty's new book Capital in the 21st Century found that economic inequality is likely to reach levels that result in social destabilization. Poverty is still increasing after an economic recovery that saw as much as 95% of gains go to the top 1% after the recession.

And climate change is here, with the Nation summing up the current situation saying, "Our environmental crisis has progressed beyond 'might' and 'probably' to 'is' and 'will.'" On top of all that, the U.S. suffers from myriad challenges like rampant police brutality and crushing student loan debt.

If our country's leadership is serious about regaining the trust of young people (which it should be, given we're the future of the country), it needs to start formulating a plan for tackling at least some of these problems in a serious, systematic way — a plan that it seems most Millennials don't think is likely to develop. Hopefully, we can prove ourselves wrong.