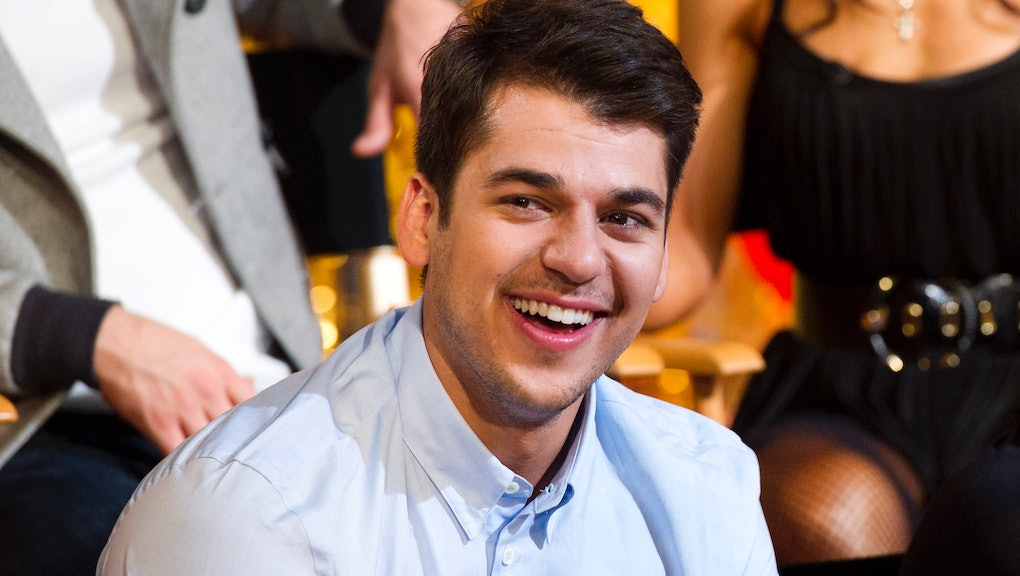 The Kardashians are no strangers to media scrutiny and negative press, but the public taunting was cranked up a notch this week — somewhat unusually, at the expense of the male heir, Rob Kardashian.

When the reality TV star was spotted at LAX on his way to France for Kim and Kanye's wedding, the blogosphere erupted with digs and taunts at Kardashian's weight. TMZ ran the headline "Would you like chicken or fish? (Or both?)," while tweeters called him a beach ball, accused him of gunning for a diet endorsement deal and made jokes about his eating habits.

The audience and anonymity afforded by the Internet makes bullying an easy ride, but it also gives the victim a platform to respond. In tweets that have since been deleted, Kardashian said:

In doing so, Kardashian joined an ever-growing league of public figures speaking back to those who would critique their bodies. With each, the message is clear: Their weight has nothing to do with their profession, with their self-confidence or, frankly, with anyone else.

It should be noted that fat-shaming — the act of demeaning a person (intentionally or otherwise) on account of his or her body size — tends to be directed at women. Just this week, a bunch of British music critics spent more time discussing opera singer Tara Erraught's dress size than her voice — an issue Pavarotti never seemed to face.

But the public glee over Rob Kardashian's extra weight emphasizes that it's not only women who face antagonism and insult over their body shape. Kat Stoeffel at New York magazine argues that male body scrutiny doesn't amount to "fat-shaming" in the same way as it does for women, for whom weight gain is seen as "a moral failure." But the evidence stands against Stoeffel.

Rob Ford, a politician with endless fodder for criticism, is constantly the butt of fat jokes, from his "near-spherical shape" to his "heart-disease skin tone." As a Twitter handle dedicated to the cause asks, "Why attack a politician for his platform when you can just make fun of him for his weight?" Tabloids have called Russell Crowe a "gladi-eater," mocked Gerard Butler for his "moobs and a really big gut" and even rebranded the Oscar-nominated The Wolf of Wall Street star "Leolardo DiFlabrio" and "The Great Fatsby," asking, "What isn't Gilbert Grape eating?"

Not that Kardashian is the first fat-shamed man to fight back. Actor and Britney Spears ex-boyfriend Jason Trawick tweeted a proud, sarcastic photo of his stomach after TMZ ran a story on his weight gain.

The Kardashian episode serves as a loud reminder that it's not only women who suffer at the hands of a culture that sees fatness as a disability and a negative attribute worthy of derision. A report from 2009 showed that weight discrimination in the U.S. increased by 66% over the previous decade. It also found that obese people are overwhelmingly stigmatized as "lazy, unmotivated, lacking in self-discipline, less competent, noncompliant and sloppy," and depicted by the media as "stupid, ugly, naive, irresponsible, lazy, greedy, without manners and repugnant."

As Jillian D'Onfro wrote at Business Insider, "Fat-shaming is one of the last socially acceptable forms of discrimination. It's easier to recognize overt sexism or racism and many of sizeism's most blatant manifestations slip into the mainstream." Any of these kinds of everyday prejudices would not be appropriate if they were aimed at a person's gender, ethnicity or sexuality.

Even major corporations are guilty — Disney, Instagram, Lululemon, Abercrombie and OKCupid, to name just a few; the discrimination holds people back professionally and can even lose votes for political candidates.

Fat-shamers often hide behind the guise of concern, either for the overweight person or for the taxpayer's money. But as Lindy West wrote for The Stranger, "Bullshit."

If the comments aimed at Rob Kardashian were really concerns about his weight, they would have gone easy on the nasty following rumors that Kardashian was having a tough time, struggling with weight gain and substance abuse, and had checked into rehab for depression.

Fat-shaming is the unnecessary, thoughtless and cruel act of drawing attention to a person's body shape, as if they didn't already know what they looked like. Fat-shaming is the incorrect and conceited assumption that you know something about this person's medical history, dietary habits and life choices. Fat-shaming is the belief that this person is deserving of your judgment, derision and scorn, that they are a less worthy individual than you.

Body-shaming comes in all shapes and sizes — underweight as well as overweight, male as well as female — and it is never acceptable.