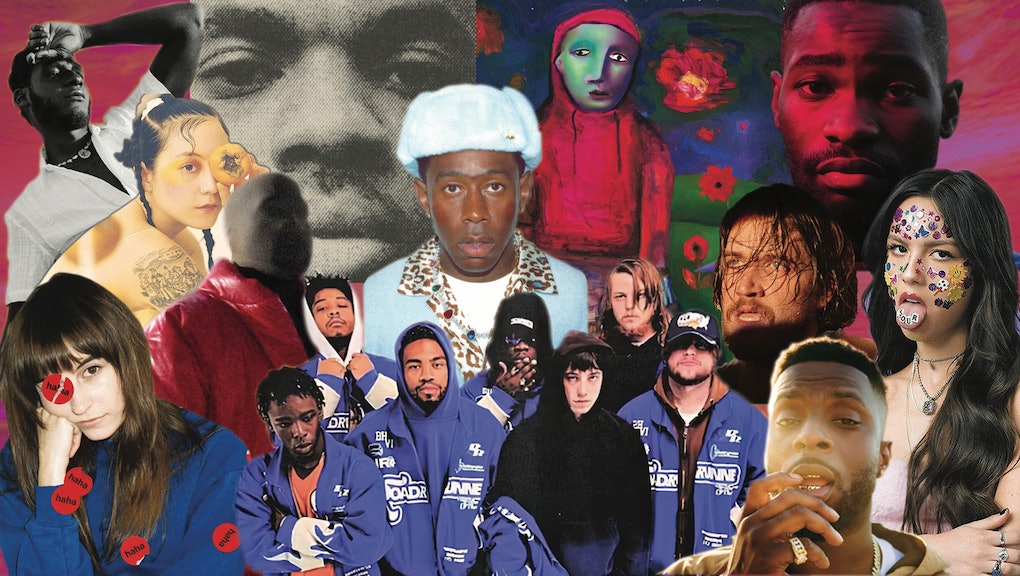 12 albums that saved our summer in purgatory

The return of music festivals — one of the final markers of a true exit from the pandemic, in all its sweaty claustrophobia — might be doubling back on itself, but music itself made a big clamor this summer. Some big releases are still stewing: Kendrick Lamar and Frank Ocean have just barely indicated they’re alive, and Drake just announced an early September release of Certified Lover Boy after an uncharacteristically silent 2021. But other blockbusters and remarkable releases took their place this season, book-ended by Olivia Rodrigo’s big, deliciously angsty entrance in May and Lorde’s long-awaited return in August. These were the best albums of the summer:

If this summer belonged to anyone, it's Olivia Rodrigo. Within the blink of an eye, Rodrigo managed to storm through the zeitgeist as our next generational pop star. She was anointed a Gen Z emblem in the most modern of ways — Sour’s lead single, “Drivers License,” which single-handedly catapulted Rodrigo into everyone’s homes, blew up via Tiktok. But Rodrigo also arrived seemingly fully-formed as both a vessel for deep-feeling youth, and also a studied maestro of how exactly to channel and perform that emotionality in her music. Any interview of Rodrigo gives one a sense of just how precocious and knowing Rodrigo is of how her music sounds or what her aesthetic projects. On Sour, she’s having a young lover’s breakdown, but is also completely aware of the machinations of what makes that breakdown so romantic, intoxicating, and endlessly listenable.

Call Me If You Get Lost, Tyler, the Creator

“The sun beaming,” Tyler, the Creator says impassively in the first second of Call Me If You Get Lost, a proclamation that belies the wormhole we soon fall into. Listening to his latest record is, indeed, akin to staring into the sun. It’s a dazzlingly brilliant pastiche, filled to the brim with his ideas and moods: production that careens between sounds on the same track; Tyler feeling himself before hating himself for being a bit of a sleaze; hype man DJ Drama bellowing into our ears every couple minutes. You’re left dizzied by the end of it. It’s also all somewhat of a distraction from the guilt and heartbreak that lies underneath, particularly on “WILSHIRE,” the album's church confessional centerpiece. Of course, Tyler still emerges smirking, if a little shaken, and at the height of his powers.

Most of the time you hear Faye Webster sing, the words are slipping out of what sounds like a barely opened mouth — her lines land like a wry sigh, although sighing itself might be too exhausting for her. I Know I’m Funny haha, the second album from the alt-folk songstress, embodies the energy of its title (along with the titular song and the line’s delivery on that track), full of deadpan matter-of-fact reflections that can be startling — “I don’t get the point of leaving my house / ‘cause I always come back” — in their simple yet visceral picture of deep malaise. The album landed in the middle of a summer that felt like a brief respite from everything, yet the record was the sound of a past year of depressive afternoons, trapped in a room, wondering what the point of it all was.

Finally, it’s here. After weeks of teases — exclusive listening parties and three stadium shows, a livestream of him literally sleeping and working out — and more controversies still rolling in, Kanye West has finally released his tenth album, DONDA. Or at least, if West is to be believed, Universal Music has released it. DONDA is Ye’s galactic religious opera: overly long, censored, and populated by synth-heavy church organs, messy confessionals, and a crowded congregation of guests in superbly-cast roles. Many songs are compelling but still feel unfinished — a lack of drums on some, for instance, feel like the final missing stroke to creating momentum on what would otherwise be glorious tracks. It is, as is the case with the majority of Kanye’s career, to be an initially polarizing work upon arrival — it’s hard to completely dissociate an opinion about the music from one’s own frustrations (or admiration, depending on your stan-dom) about the rollout itself or from pre-conceived impressions of the previous incarnations of the record. But, of course, as is Kanye’s ultimate design, we’re nevertheless listening, and the chatter is by far the loudest for an album all summer.

We’re All Alone in This Together, Dave

It’s hard to imagine the level of pressure that followed British rapper Dave’s debut album, Psychodrama, which topped UK charts and earned him the prestigious Mercury Prize for Music. It’s particularly jarring when you consider he was only 21 at the time. And yet, with We’re All Alone in this Together, he still managed to top towering expectations. In a manner reminiscent of Lamar's To Pimp A Butterfly, Dave’s sophomore work grapples with a sudden stardom that only makes the stark realities of the Black and immigrant experience all the more glaring for him. The record is full of contemplative bangers, supported by Dave’s impressive wordplay and lyricism, but the album is most potent for his earnest, often heartrending self-reflections about marginalization and alienation.

It may be blasphemous to put in a collection of songs from a comedy/variety special on a list of otherwise true-blue albums. But even apart from the fundamentally visual performances of Bo Burnham’s Netflix special, the music from Inside takes on a life of its own. The tracks become surprising earworms, swing wildly from electro-pop to R&B to folk, and together offer up a script for a period of upheaval and apocalyptic darkness. The goofy nature of some tracks may belie the often moving (e.g. the sketch concept of “White Women’s Instagram” with a suddenly poignant bridge that trucks you over) and incisive songwriting. And the two-piece combo of the mournful “That Funny Feeling” and the manically grand opera (no surprise here that Burnham has repeatedly referenced Kanye as an influence) of “All Eyes On Me" is a gut-punch that is singular, even transcendent.

The House is Burning, Isaiah Rashad

After an acclaimed album that garnered him a cult fan base, Isaiah Rashad retreated into darkness and addiction, only to return years later to lay his scars bare on record. That might be the storyline of the release of The Sun’s Tirade, Rashad’s sophomore album from 2016, or it could be the same one for his latest, The House is Burning. During the five years since his previous record, Rashad ended up in rehab, homeless, and was almost kicked off of his label multiple times. You get glimpses of those grim places here, but Rashad’s album can also be boisterous and buoyant (he is the master of the smooth banger), his flows always stank-face thick and sticky. It is his most accessible and immediately enjoyable work yet. Rashad had to rise from the darkness again, but this time, as embattled as he is, he also sounds wiser, freer, and more ready to smile.

Much of the work we have come to know Michelle Zauner, a.k.a. Japanese Breakfast, for has been steeped in grief. Her first two albums were often consumed by the darkness that stemmed from her mother’s death, and her bestselling memoir from this past April more pointedly centered on that relationship and the shattering, paralyzing effect of loss. It is this context that enhances what conversely feels often like a full-throated parade on her latest record, Jubilee. Her writing is just as rich and still wrestles with grey moments, but the sound is far more grand — rich instrumentation at times capped with triumphant horns — and Zauner seemingly much happier. For the listener as much as it is for Zauner, Jubilee feels like finally picking yourself up out of the haze, going to the carnival, and catching yourself finally laughing and screaming on all the rides.

If you take a long-arc view of Vince Staples’s work, from his breakout Summertime ’06 to his most recent self-titled album, you’ll quickly notice a consistent vision of him revisiting the nightmares of a dangerous and destabilizing youth. (Staples himself confirmed this in a press release about the album: “I feel like I’ve been trying to tell the same story.”) In his hands, though, it’s not a mark of repetition, but one of long-lasting trauma. This latest work wrestles with those ghosts and producer Kenny Beats’s touch lends a cohesive, spare but sturdy sound to the record. It can be, as is often the case with Staples’s oeuvre, a bouncy record on the surface, but one that is upon the slightest inspection simultaneously haunting.

Anybody privy to BROCKHAMPTON's origin story — a gaggle of teens who met on a Kanye fan page, rented a house in LA, and churned out a trilogy of truly bracing hip-hop within a year — knows how much of a factory of organized creative chaos the rap group is. There’s always been an air of both frenetically giddy energy and moody melancholy in their work. Their latest record feels like the group is at its most focused, but the anguish is far weightier: the back-end of the album is shadowed by the voice of one of its members, Joba, reflecting on his father’s recent suicide. That trauma, though, is also paired with reliably stellar pop cuts ("I'll Take You On," "Old News") and arguably some of their best rap tracks yet. Somehow, it all fits perfectly.

if i could make it go quiet, girl in red

If Olivia Rodrigo’s Sour was the summer breakup record that you blasted while you shouted and cried on the floor of your bedroom, girl in red’s debut album if i could make it go quiet is the moody, romanticized soundtrack to the montage of the relationship itself. The record marks a more official entrance following an impressive string of singles — infectiously youthful tracks about the melodrama of angsty love — over the last couple years that built a substantial fan base for Marie Ulven Ringheim, the 22-year old Norwegian singer-songwriter behind girl in red. Here, she reaches a fuller form, with a more impressive range in her production (Ringheim produced the album alongside fellow Norwegian artist Matias Tellez) that nevertheless maintains that trademark feeling of a fall romance, in all its ups and downs.

In the past, Leon Bridges’s music has been enjoyable and magnetic, but predictably so because of the easy way he slips into the voice, sound, and look of a rose-tinted retro soul era. But on Gold-Digger Sound, he moves those inclinations into something more fully his own. His soulful flair still feels like a throwback, but it's less like a worshipping homage, and instead much more weighted, more personal, and full of rich surprises, including even occasionally some trap drums. It’s no surprise that the backstory to Bridges’s new album is informed by a return home and a period of self-discovery. Gold-Digger Sound is named after the studio where he lived and recorded in Los Angeles, but it is in fact the sound of Bridges having found himself artistically and entering his prime.