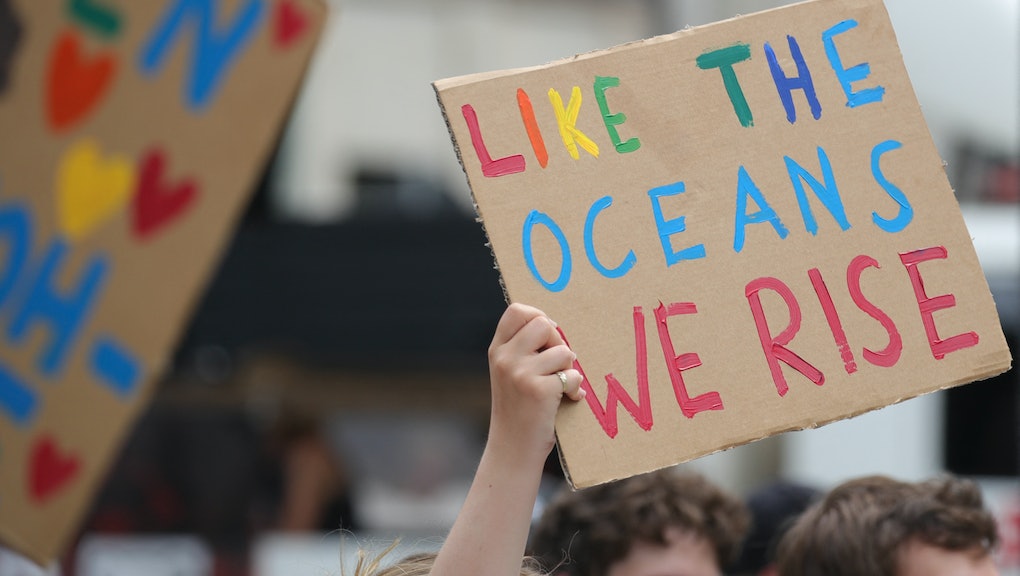 5 reasons to feel hopeful about the climate change fight

In this day and age, if you hear the word "climate," the word "disaster" — or perhaps "crisis" — is likely to follow. From terrible wildfires, to microplastic pollution, to Earth clocking in at the hottest it's been in 12,000 years, there's no escaping news about how screwed our world is. But it's important to remember that being momentarily screwed doesn't mean all is lost.

When discussing climate change scenarios, it's impossible to completely avoid frightening data or difficult conversations. The unfortunate reality is that, yes, the environment is in dire straits right now. Yes, there's serious cause for concern and, more importantly, drastic change. The fear of what will come if that doesn't happen shouldn't be ignored — but it's also not helpful when that fear becomes all-consuming. In fact, feelings of hopelessness about climate change can actually keep us from taking necessary action.

So, say it with me: The world isn't doomed. People, in general, are not terrible. We are not destined to completely destroy the planet, and we are capable of doing better. But if you've been feeling a little hopeless about climate change and struggling to see the (restored) forest for the (charred) trees, here are five reasons to be optimistic about the climate fight ahead of us.

Fossil fuels are out

Most people know that fossil fuels like coal, oil, and gas — the primary source of carbon dioxide emissions, according to the EPA — are terrible for the environment when burned. But the problems with fossil fuels extend far beyond their use, to the actual process of extracting them. For example, fracking — the process of drilling deep into the earth, then using a high-pressure mix of water, chemicals, and sand to release the fuels inside — is responsible for toxic air and water pollution, not to mention negative mental health effects.

Luckily, fossil fuels are falling out of style — mainly because they're losing value. In recent years, massive investors have backed away from the industry. For example, Norway's Government Pension Fund Global, which is the world's largest sovereign wealth fund, dropped over $13 billion of investments in the fossil fuel industry; new legislation allowed it to instead invest in renewable energy.

Renewable energy is far from perfect. There are some clear shortcomings to address when it comes to solar power, for example, like the lack of a global plan for recycling panel materials. Still, it's undeniable that clean energy is ultimately far better for the planet than a continued reliance on fossil fuels — and it's cheaper, too.

In 2018, a report from global consulting firm Wood Mackenzie claimed that in the next 20 years, clean energy will replace fossil fuels as the main global energy source, due to how (relatively) inexpensive it's become. In June 2021, a BloombergNEF analysis found that building new renewables is cheaper than burning fossil fuel. And the U.S. Department of Energy's 2021 Land-Based Wind Market Report revealed that wind energy installations surpassed all other energy sources in 2020.

Transitioning from fossil fuels to renewable energy won't necessarily solve all of our problems, especially if energy use itself doesn't improve. However, in its 2021 World Energy Investment Report, the International Energy Agency stated that "renewables dominate investment" and are expected to account for 70% of the $530 billion that will be spent on new power generation in 2021.

The renewable energy market is also seeing massive job growth, which will hopefully ensure the industry itself continues to grow. Forbes reported that in 2018, a clean energy boom led to the industry adding 110,000 net new jobs.

Even though there's much work to be done, growing climate movements show that people are becoming mobilized en masse. In a 2021 Pew Research Center survey, 64% of U.S. adults believed efforts to combat climate change need to be prioritized, up from 52% the year prior.

And while the climate fight is often seen as being led by youth — which is partially true — there's still a clear intergenerational aspect within climate organizing, particularly when it comes to communities of color. Take the many Indigenous-led movements to stop pipeline construction, for example — there's no ignoring the presence and overall influence of elders in those scenarios.

This intergenerational work is incredibly important in the fight against climate change, as no generation should be left to take on this monumental task alone. The inclusion of elders also makes it difficult to continue ahistorical narratives that paint climate change as a modern concern of the 2010s or 2020s; it's clear communities of color, in particular, have spent decades speaking up about the impacts of environmental racism.

The biggest polluters are starting to be held accountable

When I was growing up, the dominant narrative was that the responsibility for averting climate disaster rested on individuals, and I was frequently lectured by teachers about how wasting water or forgetting to shut off the lights was bad for the environment. But we can't focus on individuals while ignoring the biggest contributors to climate change: corporations and governments.

If you want to blame someone for the climate crisis, take a peek at the 2017 The Carbon Majors report published by the environmental non-profit CDP in collaboration with the Climate Accountability Institute. It found that since 1988, just 100 companies are responsible for more than 70% of the world's total greenhouse gas emissions.

The worst polluters want you to think that you, alone, are the problem, so they can continue flying under the radar with their reckless actions. But thanks to growing social movements, people are learning more about climate change from grassroots activists and leaders — and as a result, we're seeing increased demands to hold top polluters accountable.

This year, Senate Democrats, led by Chris Van Hollen (D-Md.), even introduced the Polluters Pay Climate Fund Act. The legislation would require roughly 30 of the biggest greenhouse polluters in the U.S. to pay $300 billion into a fund over 10 years. Per The Hill, Van Hollen's office estimates that companies like Shell, ExxonMobil, and Chevron would get hit with a $5 billion to $6 billion annual tax. It's about time.