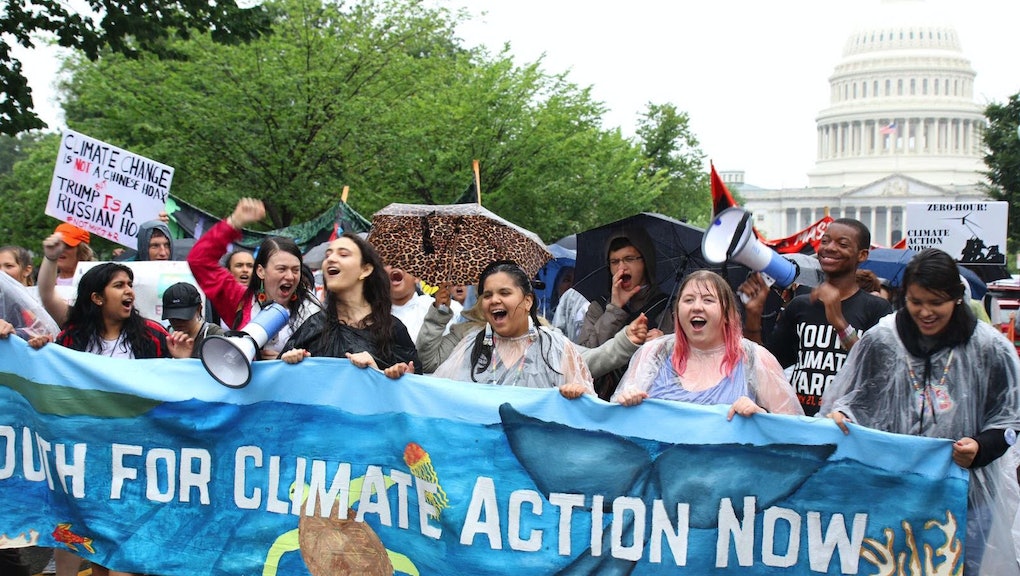 How youth climate activists pushed through the pandemic

It's hard enough growing up amidst never-ending lists of pending climate crises without a once-in-a-lifetime global health event thrown in on top of it. Yet these dual existential threats merged in the last year, throwing the youth of the world a curveball as they work to fight for a livable future. Some expected organizing around issues like climate change to take a hit as lockdowns made massive actions like rallies and marches impossible. But instead, the pandemic has fundamentally changed how youth approach environmental justice as a whole, and many say that shift has occurred for the better.

Youth have always taken part in environmental justice organizing, but the spotlight on them has increased over the past few years. In the United States, youth like 13-year-old Mari Copeny — also known as Little Miss Flint — and Xiuhtezcatl Martinez have garnered publicity for tirelessly advocating for their communities. And while youth have staged massive in-person events, like the first-ever Youth Climate Strike in 2019, a global walkout of more than 1 million students, they've always utilized social media, too.

The Earth Guardians Youth Council, the youth-led decision-making body of an intergenerational organization addressing environmental movements globally, cites this familiarity with digital organizing as key to sustaining activity during the pandemic. In a collective statement, the Youth Council told Mic, "[We have] been working across the nation and across borders via phone conferences and using Zoom for years prior to the pandemic. So, when it hit, we had the opportunity to process together and begin to reimagine, once again, what we could do together."

Rather than bring everything to a screeching halt because of the pandemic, the Youth Council worked on initiatives like a virtual training series for youth who are new to activism, and Earth Day Live 2020, a three-day livestream that reached millions of viewers worldwide. Planning for the event began after in-person mobilizations were cancelled in March 2020 and helped the Youth Council realize the power of virtual organizing.

There was a legitimate bonus, too: By shifting online, the Youth Council said it was able to build connections not only nationally, by bringing its grassroots-level crews into national work, but also globally. With all of the council's in-person trainings now taking place virtually, the Youth Council is able to "meet and collaborate with youth from around the world, who ordinarily wouldn’t be able to attend," they told Mic.

"We were able to see the larger impact we could have as an organization," the Youth Council shared. "This pandemic has been so hard on so many, but it has allowed us to connect our Earth Guardians family more than we have ever been able to do. With this newfound inspiration and camaraderie, we are ready to take Earth Guardians to the next level."

The ability to collaborate digitally with people that otherwise wouldn't have been available was also mentioned by Natalie Sweet, the 17-year-old communications director for Zero Hour, an international youth climate justice movement. Sweet told Mic by email that "the pandemic has provided more opportunities for projects with our international chapters; now that we are all online, we have more time to communicate and plan. We were able to uplift and work with chapters around Earth Day 2020," and they planned to do the same for Earth Day 2021.

Like Earth Guardians, Zero Hour had to dramatically restructure some of its planned events, including a bus tour across the U.S. that was supposed to take place in March 2020 as part of a voter campaign called Vote 4 Our Future. With those plans uprooted by the pandemic, Zero Hour made its campaign virtual instead, which included holding livestreams with organizers from some of the Midwestern states they planned to hit on their bus tour.

"We have been able to organize phone banks for this campaign, which might not have been a top priority if we were organizing in person. But I’ve found it to be very impactful to connect with voters — even on the phone — about issues that they deeply care about, such as jobs and climate change," Sweet told Mic. "I have learned that you can make a huge impact while organizing online — COVID has not rendered Zero Hour unmotivated, rather, we've continued the fight for climate justice in unique ways."

The Youth Council echoed Sweet's sentiments about the usefulness of replacing large-scale protests with locally-focused efforts like phone banking, petitioning, and education. "Virtual organizing has afforded us the opportunity not only to collaborate more effectively within our own international organization," the council wrote, but also "to build powerful multi-organizational coalitions within the national climate organizing space."

"The movement became accessible to youth who may feel they do not have a community to share their passions with, and those who live in remote areas, far away from the large-scale physical mobilizations of New York, Los Angeles, and D.C.," the Youth Council continued.

In addition, Sweet shared that the pandemic has made Zero Hour and others more conscious of the roles that corporations play in global crises. For example, Zero Hour joined the No Fossil Fuel Bailout campaign in May 2020, which, Sweet explained, was aimed at preventing Congress from giving fossil fuel corporations millions while people in the U.S. struggle to survive because those same politicians refused to release any substantial form of aid.

"Because of this experience, we're looking to expand our policy and lobbying reach in the future to many other tangential and relating movements under the umbrella of climate change, such as labor issues and bills about the filibuster," Sweet wrote. "I'm very excited to show the impact that youth organizers can make, and we've already started — for example, we partnered with Rep. Alexandria Ocasio-Cortez's team to publicize the BUILD Green Act in March."

Although digital organizing obviously has its positives, organizers are looking forward to when they'll be able to build those in-person connections again. Ivy Jaguzny, the press lead for Zero Hour, told Mic by email, "While we have been able to adapt to online organizing, this pandemic has revealed the value of on-the-ground community organizing and in-person action. Social media and online organizing have their limits, and alone, they cannot sustain a movement forever."

Recognizing the work of youth in areas like environmental justice is vital. But it's also necessary to remember that, at the end of the day, the youngest activists are still harmed by the pandemic on a personal level. Researchers have repeatedly found that the pandemic has severely impacted the mental health of youth, with increased symptoms of depression, anxiety, and more. And while Earth Guardians and Zero Hour continue to organize, they are also having tough conversations about how to prioritize their own well-being.

It's easy to run yourself into the ground until you are exhausted; anybody who has organized can attest to that. And with youth organizers so often revered as almost superhuman in their abilities to mobilize, this becomes especially true. But as Jaguzny told Mic, "Even as young people with an immense capacity for optimism and hope, we are not invincible. Many of us have really struggled during the pandemic, as high school and college students especially. We are facing serious conversations about burnout and what it takes to keep people engaged."

As a result, Jaguzny shared, Zero Hour has become more intentional about team-building and community bonding, while people also consider what is keeping them tied to this work. Sweet said, "We've been working on storytelling exercises to ground ourselves in why we are in the fight for climate justice."

Similarly, Earth Guardians has used the pandemic to reflect and turn inward. That means not only looking at the organization's internal structure but also recognizing the value of individual growth. As the Youth Council told Mic: "On a personal level, the effects of the pandemic impacted us all, and it became increasingly apparent that mental health must be prioritized within the organization. We used the pandemic to slow down, pause, and reflect on what it means to be an Earth Guardian, and to hold space for each other while we process the effects of the pandemic as a community."

The pandemic by itself is terrible — there are no questions about that. But in terrible moments, it is perhaps even more important to recognize the useful lessons that you can take away for the future. When the pandemic ends, youth will undoubtedly be permanently changed by it, but it doesn't necessarily have to be for the worse. As the Earth Guardians Youth Council wrote, the need to "change to stay afloat in the midst of a global pandemic ... had a large, positive impact on us, and we plan to advance many of the initiatives we engaged with."

And in reflecting on how the pandemic has changed how Zero Hour will respond to environmental issues in the future, Jaguzny shared, "I think many of us have discovered that person-to-person connection and community support are necessary to sustain this work." When the pandemic ends, she said, rebuilding from the "isolation and trauma" it has inflicted will be a priority.

But still, Jaguzny said, "As a movement, I think we are emerging from this pandemic with a renewed desire to build solidarity and connection, because real connections matter." The pandemic might have changed the work — but it certainly didn't stop it.