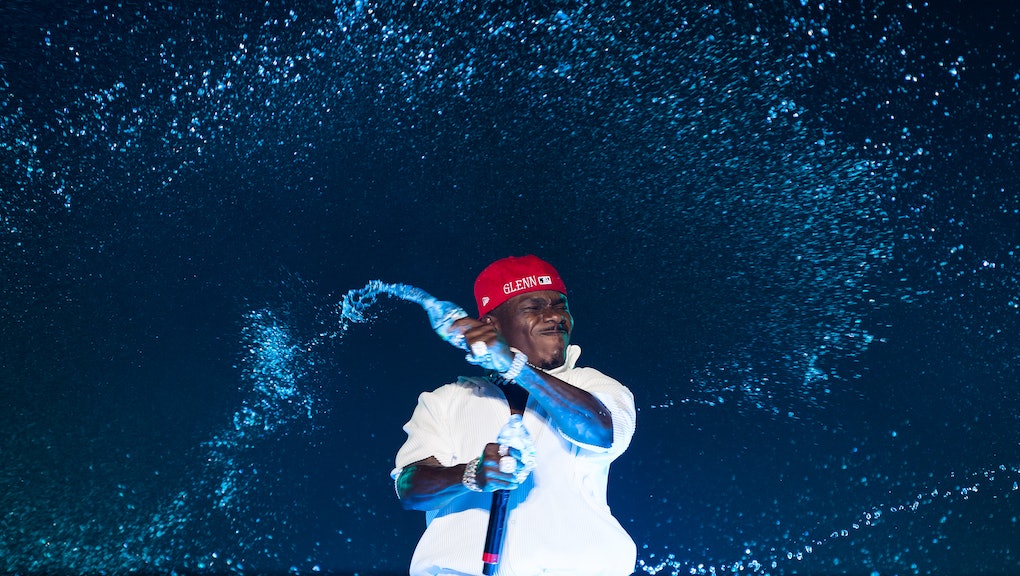 DaBaby met with HIV organizations, but does that absolve him?

DaBaby has had a busy five weeks in the pop culture news cycle since his July 25th appearance at Miami's Rolling Loud music festival, and not in a good way. For those of you who take good care of your mental health and stay far away from the sticky web of the internet, DaBaby went on an incredibly bizarre homophobic rant at the festival, and was promptly cancelled. The artist, who had previously coined himself one of the "best rappers alive," faced extreme backlash from fans, fellow celebrities and a slew of concert cancellations including getting kicked off of the Lollapalooza, Austin City Limits and Governor's Ball festivals. Now we're faced with the uncomfortable question yet again that a growing group of celebrities have forced us to ask: what does it take to come back from major transgressions in the public eye?

DaBaby has taken us on a rollercoaster ride of emotion in creating his own answer to that storied question. The day after his disparaging comments on stage went viral, he took to his Instagram stories to dig in, suggesting, among other things, that his queer fans don't have HIV because they're not "nasty" and aren't "junkies." Not only is it a horrific, and wrong argument to make, it's a strange hill to want to die on for DaBaby. It has long been established that people living with HIV can live fulfilled, healthy lives with treatment, and the mission of many HIV/AIDS organizations is trying to make these treatments available to marginalized communities and educate the public on ways to prevent the spread of the virus. Considering that information, and just how horrifically the AIDS epidemic was propelled by homophobia, why in 2021 would DaBaby chose to disparage those living with HIV/AIDS?

When underlining his hateful argument didn't work, DaBaby did post an apology to his Instagram page, but it was quickly dismissed as disingenuous and he subsequently deleted the post days later. And when Hot 97 welcomed him to perform at Summer Jam, he apologized and thanked the station in a recorded message — before calling his critics "crybabies" during his performance. It's hard to believe someone is sorry when they take it back like that.

What was most meaningful in the days just after the incident was the open letter that numerous HIV/AIDS organizations from GLAAD, to the Southern AIDS Coalition, to the Black AIDS Institute penned to the rapper, imploring him to use this moment as an opportunity to engage and learn, urging him to transform from an "adversary to an advocate." As of August 25, 125 organizations had co-signed the letter. Well almost a month after its release, DaBaby has met with these organizations, but considering his behavior since late July, is that enough to absolve him?

In a press release from the organizations present at the mea culpa summit they extolled, "The open letter to DaBaby was our way to extend him the same grace each of us would hope for. Our goal was to ‘call him in instead of calling him out.’ We believed that if he connected with Black leaders living with HIV that a space for community building and healing could be created. We are encouraged he swiftly answered our call and joined us in a meaningful dialogue and a thoughtful, educational meeting." And while DaBaby actually confronting his words and asking representatives of the actual people he harmed to educate him is important and necessary, we can't ignore that it's also exploitative. It also isn't advocacy. It isn't revolutionary for DaBaby to show he's capable of recognizing queer human beings living with HIV as just that, human. It's not work; it's where the work begins.

In terms of the organizations present, it's worth noting the optics of public forgiveness. It's a complicated aspect of fighting oppression. It's a set up. Black people are expected to show forgiveness to oppressors because of the stigma around black communities being violent. If they don't, they're accused of perpetuating the toxic and manipulative stereotype that oppressors invented to begin with; if they are forgiving, they're seen as exemplifying christian values and given a condescending pat on that back, a loose handshake agreement to be allowed to continue living. In the same vein, queer people are expected to forgive because they have managed to grab a modicum of power for themselves, and they in turn must perform forgiveness as a thank you for being allowed the bits of power that the community has managed to maintain. It is a long-used trick of convincing marginalized communities to smile for the cameras, because if you show your true rage, they'll just condemn you for being who they said you were to begin with. It is an insidious way to get the people you oppress to behave. It is also the reason that the queer organizers who originally protested the AIDS crisis in the 80's and 90's were called Act Up.

There is also a long-running argument in social justice politics that it's not the job of the oppressed to re-educate the oppressor. Audre Lorde spoke of this in Sister Outsider: Essays and Speeches stating, "I am responsible for educating teachers who dismiss my children’s culture in school. Black and Third World people are expected to educate white people as to our humanity. Women are expected to educate men. Lesbians and gay men are expected to educate the heterosexual world. The oppressors maintain their position and evade responsibility for their own actions. There is a constant drain of energy which might be better used in redefining ourselves and devising realistic scenarios for altering the present and constructing the future." I believe that the trend of celebrities who say racist, homophobic and misogynistic things in public scrambling to non-profit organizations operating on shoestring budgets to help underserved communities and marginalized people survive falls into this category.

Sure, maybe DaBaby really does want to learn why his comments were so offensive. Maybe he even wants to set an example to others who agreed with his homophobic comments that they too can learn and grow. But much like when Morgan Wallen met with the Black Music Action Coalition months after being filmed using the n-word in what he is still referring to as a "playful" manner, it feels more like DaBaby just wants his cancelation to end. These celebrities lose hundreds of thousands, sometimes millions of dollars in partnerships, appearances, sales and performances when they get "cancelled," so how are we to believe that they're protecting anything other than their paychecks and their status?

Marnina Miller of the Southern AIDS Coalition said in a statement, “DaBaby’s willingness to listen, learn, and grow can open the door to an entirely new generation of people to do the same.” And while she's not wrong, it just seems insidious that this could become a trend of celebrities running to the appropriate non-profits and advocacy organizations after they fuck up. They get publicly scolded, smile and nod along, while mentally preparing to start working again — because absolution has magically been granted. It sets up an awkward dichotomy, because people who support the cause will feel uncomfortable going against the word of the groups that typically protect them. It's not a bad thing for these groups to want to engage with a defamed celebrity, and create a public soapbox on which to spread their message, but like Audre Lorde said, it is draining when that energy can be spent elsewhere.

It's complicated territory that became more complicated by the Trump era. The societal question about whether or not to engage with those you fundamentally disagree with was put on the table in a new, bigger way. For some, the answer is an easy 'no,' you don't indulge the hatred of others and dignify it with a response. Others pose the opposite argument, that it's only by engaging, reeducating and humanizing a cause do you create real change on the personal level.

For DaBaby though, he didn't waste time enabling Kanye West's inner provocateur at a Donda listening event by appearing alongside accused sexual predator Marilyn Manson for some kind of cancellation parade. He also didn't wait a full day after the news of his meeting with the HIV/AIDS organizations broke to release his own remix of Wizkid's "Essence" addressing his character assassination in his lyrics. Seems like he was very poised for a comeback, and meeting with prominent queer leadership was an avenue to get there.