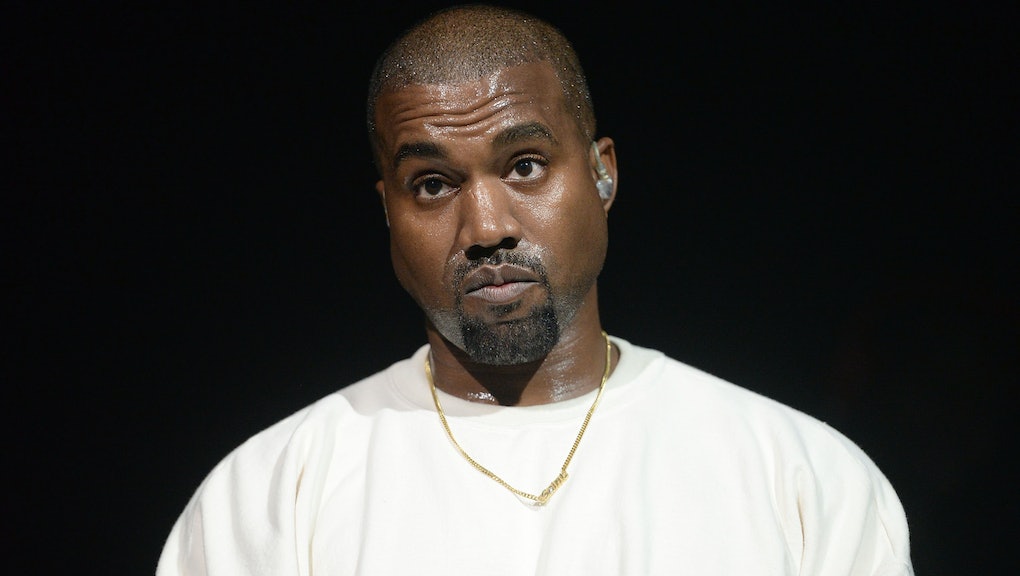 What was Kanye thinking by bringing out DaBaby and Marilyn Manson?

In what appears to be a misguided critique of cancel culture, Kanye West featured two controversial figures at last night's DONDA listening party in Chicago at Soldier Field. He brought accused rapist Marilyn Manson and unapologetic homophobe DaBaby onstage with him at Soldier Field. Pitchfork reported that a new verse by DaBaby appears to have replaced one by Jay-Z, which is its own messy snub.

It was already looking like the Chicago DONDA listening party was careening towards chaos when reports emerged that West wasn't requiring proof of vaccination or a negative COVID-19 test to attend. It's not hard to imagine the jam-packed stadium show was a super-spreader event. (The event was later confirmed to offer on-site vaccinations to anyone interested in receiving them.)

West built a replica of his childhood home on the football field, which makes sense since the forthcoming album is named after his mother and he grew up in Chicago. Dressed in all black with a full face mask, he posed on the stoop of the home underneath a giant cross with Manson and DaBaby as the tracks "Hurricane" (featuring DaBaby and The Weeknd) and "Jail" played over the loudspeakers. Adding to the spectacle, West then lit himself on fire. The grand finale was a cameo by Kim Kardashian, wearing a Balenciaga Couture wedding dress during the song "No Child Left Behind."

It's hard to parse exactly why West chose to co-sign Manson and DaBaby, a move that has already drawn a lot of backlash. The shock rocker has been accused of serial sexual assault and domestic abuse by numerous women, including Evan Rachel Wood, who named him as her long-time abuser in February 2021. A cascade of similar allegations poured forth from other victims, like Game of Thrones actor Esmé Bianco. Manson is currently facing four different lawsuits for his alleged abuse. After the women came forward, he was dropped by his record label, talent agency, manager, and removed from the shows American Gods and Creepshow.

During his set at Lollapalooza, DaBaby turned a call for audience participation into an uninformed, homophobic diatribe. "[If] you didn’t show up today with HIV/AIDS, or any of them deadly sexually transmitted diseases that’ll make you die in two to three weeks, then put a cellphone light in the air. Ladies, if your pussy smell like water, put a cellphone light in the air. Fellas, if you ain’t sucking dick in the parking lot, put a cellphone light in the air," the rapper said. Obviously, this sparked outrage, so DaBaby kind of apologized, but then doubled-down and called his critics "crybabies" at Hot97's recent Summer Jam. During his infamous Lollapalooza set, he also brought out Tory Lanez, which violated Megan Thee Stallion's restraining order against him.

What is West saying with all the literally and figuratively incendiary components of last night's Donda show? I haven't the foggiest. Rather, I don't really care. This type of "shocking" behavior is tired. Supporting alleged predators and homophobes is a bad look. But West has never cared much about the optics. After all, he donned a MAGA hat and supported the last president, who was accused of sexual misconduct by at least 26 women. Anyway, it seems like Donda will drop next Friday, the same day Drake is releasing new music. That's classic Ye, stirring the pot just because he can.

More like this
The first frustrating roadblock in Marilyn Manson’s sexual assault lawsuit is here
By Chloe Stillwell
Lil Nas X delivered his baby, 'Montero,' along with an ill-fated love story
By Kara Weisenstein
The moral of Nicki Minaj and the Tale of the Giant Balls? We need to explain vaccines better
By Kara Weisenstein
Stay up to date